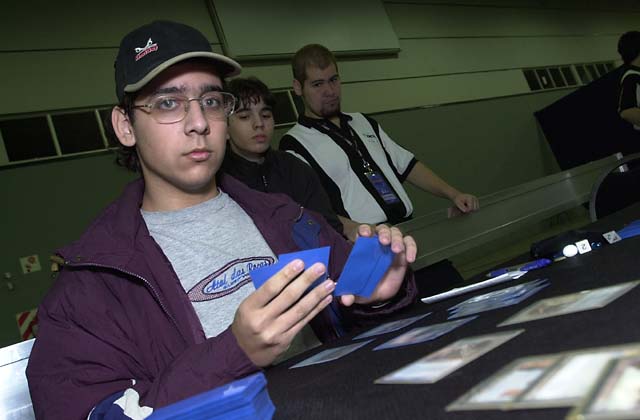 This match saw Scott's Meddling Rebels deck face off against Julio's Merfolk Opposition. The matchup advantage probably goes to Scott, since he has Disenchant-type spells to handle Julio's Orbs and Oppositions. Without these permanents, Julio's deck is clearly at a disadvantage, since the versatility and efficiency of a Rebel chain can easily beat a group of Merfolk in a fight.

The strange variable present will be the relevance of Scott's islands. By playing an island, Scott allows Julio's Merfolk to become unblockable if a Lord of Atlantis is in play. This is a situation that can turn ugly very quickly for Scott, as there are few ways for his deck to handle it. He will obviously be hesitant to play islands, but if the game comes down to a situation where he needs to play one, it will be interesting to see the result.

Scott played first and had to mulligan twice, starting the game with five cards. However, he did have the key first turn Ramosian Sergeant. Julio played a Lord of Atlantis on turn two, which attacked on the following turn. It was joined by a Vodalian Merchant, and Julio discarded an island. On end step, the Sergeant searched out a Defiant Falcon. At this point, Scott had three plains in play, and drew a fourth land. However, it was an island, and he was faced with a tough decision. He could either play the island and allow Julio's Merfolk to become unblockable, or he could decide to miss his fourth land drop, which would make him unable to search out Lin Sivvi with the Falcon. He decided to not play the island, hoping to draw a different type of land.

Opposition was played by Julio on the following turn, and Scott destroyed it with Disenchant. A Darting Merfolk also hit play. The next turn saw Scott play an Adarkar Wastes, which gave him the fourth mana he needed. Lin Sivvi was searched out on Julio's end step, making the Rebel army increase in numbers. Meddling Mage was played during the main phase, but it was Counterspelled. Julio now untapped, attacked, and summoned Blind Seer. Scott searched out Defiant Vanguard on end step.

Sivvi fetched Ramosian Sky Marshal a turn later, giving him a damage clock. It attacked through the air with a Falcon. The pressure was now on Julio, who needed to find an answer to the Sky Marshal in the next few turns, or he would lose. Any notion that Julio would be able to get through Scott's Rebel forces was dismissed when a second Vanguard showed up to lock up the ground further. Julio conceded soon after.

This matchup was a testament to the card advantage power of a Rebel engine. Scott mulliganned down to five and played first, and was able to recover without a problem because he played a Sergeant on turn one. The powerful Sergeant was able to produce an entire army by itself, and negate any card advantage that may have been lost by the mulligans.

Julio played first this time, and Scott opened strong once again with a first turn Sergeant. Julio used a Merchant to dig into his deck, and discarded an island. The next few turns saw Julio doing very little, while Scott built up his army, searching out a Lieutenant. Sivvi showed up soon after, putting added pressure on Julio, who knew that the Sky Marshal that did him in last game was not far away. He played Opposition as he started down Scott's five untapped islands. Scott attempted to counter it with Gainsay, but Julio was ready with Counterspell. The end step saw Sivvi search out a Nightwind Glider. 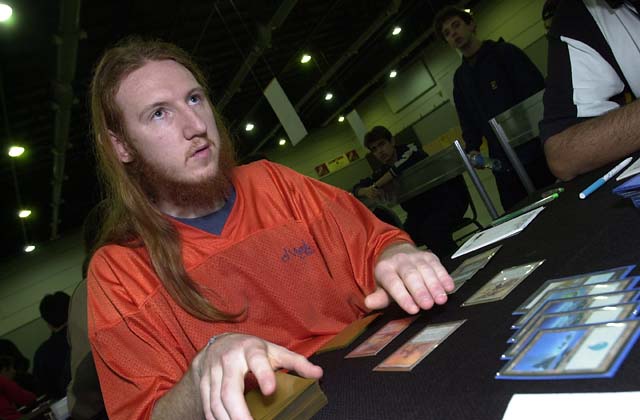 A Merfolk Looter was summoned by Julio, which gave him two creatures to work with the Opposition. Scott fetched the Sky Marshal, which would obviously be tapped down during his attack steps as long as Opposition remained on the table. This meant that Scott would need to overwhelm Julio by searching out a large amount of Rebels in order to win. Julio then played a Lord of Atlantis to stall out Scott's attack a little more. At this point in the game, Julio was certainly in no position to start winning, but he was at least slowing down Scott.

Still, Scott was getting through for damage. Julio's 2/3 Merchant was blocking while his creatures tapped down the flyers, but Sivvi put Scott into a position where he didn't care about dead Rebels. As an added benefit of all this searching, Scott was thinning out his deck, giving him a better chance to draw key spells such as countermagic, Meddling Mages, and Disenchants.

More Merfolk were played with every turn, which made ground attacks less desirable. Scott searched out a second Sky Marshal, and continued to do a few points of damage per attack. Meanwhile, Merfolk Looter continued to dig deep, as Julio was obviously looking to draw into a Static Orb. He didn't find one in time, and Scott finally squeezed through enough damage to take the second game.

Julio played first, and Scott did not have a turn one Sergeant this time around. The next turn saw Julio tap out to play Vodalian Merchant, which allowed Scott to play a Lieutenant without fearing countermagic. A Lord of Atlantis hit play the following turn, and the Merchant attacked for two. Scott then played an island for the first time in the match, and Julio took advantage by playing another unblockable creature in Merfolk of the Pearl Trident.

Turn four saw Scott search out Lin Sivvi, but the pressure was on. He really needed to draw into Wrath of God, because outracing the big, unblockable Merfolk was not going to be a successful plan. He Brainstormed and did not see any, but was able to shuffle his deck with a Rebel search. The next turn saw Scott search out a Glider and a Sergeant, thinning out his deck to increase the odds of drawing Wrath of God. However, the card never showed up, and Scott conceded.

Scott went first this time, playing an Adarkar Wastes. The only other lands in his hand were two islands, but a Brainstorm let him dig into two plains. Julio drew and sat back on his untapped islands, content to let Scott make the first move. He summoned a Thermal Glider, and played a fourth land, which was an island. It was now Julio's turn to develop his board position, and he played a Vodalian Merchant, still leaving him with two untapped islands to counter any potential threats. Sure enough, Defiant Vanguard was summoned by Scott on the following turn, and it was Counterspelled.

Lord of Atlantis hit play on the next turn, making the Merchant bigger and unblockable. Scott now had a clock to work against, although he was keeping up thanks to Thermal Glider. A few turns later Meddling Mage resolved, and Scott named Thwart. Wrath of God was played right after, drawing out a Counterspell. During the end step, Julio cast Rushing River with kicker, bouncing the Glider and Mage back to Scott's hand. Now that Scott was all tapped out, Julio took full advantage of the situation and played Static Orb, followed by a second Lord of Atlantis.

Julio untapped and played a Merfolk Looter, which was the first step in developing the lock. However, this left him tapped out, and Scott was free to Disenchant the Opposition. Still, the Looter attacked, dealing the necessary points of damage for Julio to win and force a fifth and deciding game.

This game saw Julio mulligan his opening hand. Scott played an island without fear on turn two and summoned Meddling Mage, naming Lord of Atlantis. Julio now played his second island, and the Mage went into beatdown mode. Darting Merfolk showed up a few turns later, and Scott used Brainstorm to dig into his library. He then untapped and played a second Meddling Mage, which Julio attempted to Gainsay. However, Scott was waiting with Misdirection, which allowed the Mage to resolve. When it came into play, Scott named Rushing River. Julio then took his turn and slowed down the game with a Static Orb.

Scott now sent both his Mages into the Red Zone, and ended his turn, sitting back comfortably on a Disenchant and Gainsay. The Static Orb was actually doing more harm to Julio, who needed to find an answer to the two attacking Mages. He played a Merfolk of the Pearl Trident, but Scott denied even that with a Gainsay. Julio added his own Gainsay to the stack, allowing the Merfolk to resolve. With Julio tapped out, Scott attempted to Disenchant the Static Orb, but it was countered with an alternate casting cost Thwart.

The next turn presented an interesting situation, since Julio could take down one of Scott's Mages in combat by double blocking it. Scott contemplated his options, and decided to attack. The Mage that had named Lord of Atlantis was double blocked, and the Darting Merfolk returned to Julio's hand. He then untapped, and played a Lord, which blocked the Mage. Lin Sivvi was summoned on the following turn, and was Counterspelled. A second followed on Scott's next turn, and it resolved. Julio used Rushing River to bounce it back, and countered it when it was recast.

Julio now played an Opposition, giving him the second piece to his lock, which was not as threatening as it could be since he had only one creature. Still, it allowed him to tap the Orb on end step, and untap all his permanents. Scott cast Brainstorm, hoping to draw into an answer. He summoned Meddling Mage on the following turn, naming Darting Merfolk, which stopped Julio from recasting it if the special ability was activated. It blocked and killed a Ramosian Sergeant, while Meddling Mage was bounced with Rushing River. 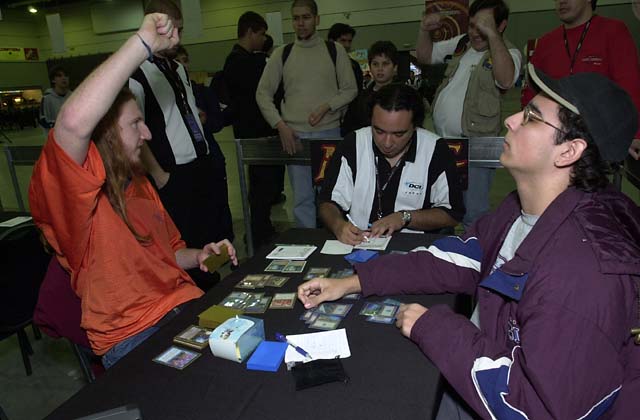 A problem occurred when Julio untapped all of his permanents, forgetting about Static Orb. This was the second time this occurred during the match, but Julio did not receive a penalty. Scott played another Meddling Mage, which was countered. Julio then replayed Darting Merfolk. The next turn saw Scott summon another Meddling Mage, naming Darting Merfolk. It was tapped down on the next attack step, and Scott increased his numbers with a Sky Marshal, which gave him the win and the match.