By by Juan F. Tavira 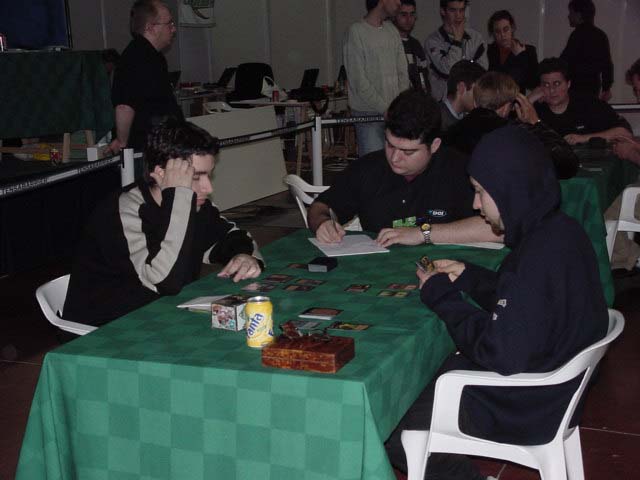 So here we are, 9:40 in the evening and beginning the quarterfinals of GP Valencia. Ricard Tuduri, who qualified first after the Swiss portion of the tournament, faced Raul Perez. They are both Spanish players and they know each other, so the feeling was like a party, a kind of game between friends that are not playing in a professional tournament.

Ricard Tuduri was using his lucky charms (a wooden frog and a foil Blinking Angel) while Raul Perez used no charms but the force! Soon they would continue the never-ending fight between mages.

Ricard Tuduri won with the die roll and he chose to start playing, his deck looked very fast as he managed to play Thunderscape Apprentice and Yavimaya Barbarian on the first two turns. Raul looked at them and smiled, returning them to Tuduri's hand on turn three (just a bit of breather for him). Tuduri continued with the horde of creatures casting Rage Weaver and Yavimaya Kavu only being opposed by a Firescreamer. Finally beatdown imposed its rules that not even a Magma Burst can break.

Between smile and jokes they glanced at their sideboards and surely Raul was looking for some speed in his deck. He changed 4 cards whilst Tuduri only changed one.

Raul played first. Certainly his deck became faster because he killed Tuduri's first turn Thunderscape Apprentice and then cast a Plague Spitter, suffering the pain of a Might Weaver inflicted to him (he still was at 18 life). Tuduri continued with his cheap creatures as he was stuck with only a mountain and a forest, but that didn't seem to be a problem. Again a Firescreamer appeared on Raul's side, followed by a Magma Burst with kicker that nearly cleaned Tuduri's army, killing two Yavimaya Barbarians. Raul's deck seemed to adjust better now and his nearly perfect use of Mourning and skillful blocking left the table without creatures. This situation did not last very much, Raul took the lead casting a Kavu Aggressor followed by a Tower Drake. Tuduri was in a mess as he was only at 3 life, he used his last trick sacrificing two lands for paying the kicker of Magma Burst but a very fast Running Kavu (haste is worth the cost!) finished the game and pushed the match to the third game.

After losing game two Ricard Tuduri asked his charms for help and revealed a hidden charm, a small silver elephant in a chain, now that is what I call a secret weapon!

Tuduri began playing after begging not to Mulligan (which he didn't) and surprisingly he did not cast an Apprentice. But he instead opted to play a Might Weaver that became very despondent after a Mourning was cast on it. Once again Raul assumed the control aspect of the game. Tuduri responded with a Thunderscape Familiar that seemed a problem for Raul because of the mana advantage Tuduri gained. Raul used one of his most valuable weapons for killing it, a Crosis's Charm, and for frightening Tuduri he laid down a Shivan Zombie. Tuduri also wanted to show new cards from his deck, so he cast the wonderful Fires of Yavimaya, that cornered Raul. Then he cast another Rage Weaver and a couple of goblins (you know, globins are everywhere). Like in the previous game the pressure on the defending player forced him to sacrifice a land for a kicker cost (Raul played Rushing River on Fires of Yavimaya and Rage Weaver). At this point it was clear that speed was not for this game and control was a better choice (this defiantly suited Raul's deck more). The game was becoming a long battle, Thunderscape Familiar, Thunderscape Apprentice and a Mourning jumping from one to another creature. Yavimaya Ancient, Fires of Yavimaya and Yavimaya Barbarian, Firescreamer and even a bouncing Sparkcaster that returned three times to Tuduri's hand (with the associated come-into-play effects). At the end there were many creatures on Tuduri's side and a Kavu Aggressor with a Maniacal Rage followed by a Explosive Growth with kicker, kicked Raul out of the match.