This is the second Top 8 at Canadian Nationals for both of these players. Richard made the Top 8 last year but fell 0-3 to Jon Stern. He did manage to take a game from Mattias Jorstedt in the Top 8 of Yokohama but lost the next three. He is 1-6 lifetime in quarterfinal matches but he felt pretty good about his playtesting results on this sunny morning. 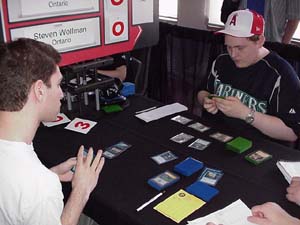 "No sir! We were testing in the car before the tournament. It was 5-2 for me and that was without me bringing in Duress!"

"Duress? That card doesn't do anything against me," Wolfman attempted half-heartedly.

Wolfman has also made it as far as the Top 8 of Canadian Nationals—1n 1997! He lost to eventual National Champion Gary Krakower. Wolfman has had a solid year with his team 2020 making the finals of Pro Tour Boston and the Venice Masters. His teammate, Elijah Pollack, sits one table over in the other bracket, which shows the possibility of a 2020 finals—even if playtest results do not.

Wolfman scoffed at the idea that it was a bad match-up, "I thought my Slide match up was easy but THIS guy..."

Wolfman had to mulligan is opening hand, "I just want to demonstrate how easy it is to beat you."

"See, he needs to get lucky to beat me."

"I already got lucky," Hoaen gestured toward the sign that showed the pairings.

Hoaen had to laugh. Believing he had lost his Standard deck, Hoaen dropped from the tournament before Round 6. His friends convinced him to stay in and he was paired against a player with only 4 points. The player would have defeated him but conceded the match. Later, Carta Magica owner, Mauro Bongiovani handed Hoaen his deck box. Someone had found the deck and turned it in at the front desk. How lucky, indeed.

Despite the mulligan, Wolfman played a turn two Compulsion. His fourth turn Deep Analysis was Spiked and Rich caught up with a Concentrate and a Deep Analysis. When he discarded a useless Engineered Plague, Wolfman jokingly asked him if that was a wise decision. "I could prevent you from killing me with spirit tokens..."

Wolfman drew a few Deep Analysis of his own and successfully resolved two of them—he now had three in the bin. Hoaen found his own Compulsion and played a Tog on the next turn. Wolfman flashed back a Deep Analysis to find an answer and cast Wrath of God. Hoaen Logic-ed but Wolfman had the Counterspell. On the down side he was left with only Brushland untapped.

With six lands in play, Hoaen cast Upheaval and replayed an Island. Two turns later—after Compulsions on both sides—Hoaen played another Psychatog.

Hoaen double-checked his math a few times and when he was absolutely sure that there was nothing Wolfman could do to stop him—the Wolf had tapped two of his three lands to Lapse a flashed back Deep Analysis—he killed him.

Hoaen had his sideboard all ready to go for Game 2—one of the advantages of having the decklists available to all the competitors the night before the Top 8. He took out 4 Smother, 2 Force Spike, Engineered Plague, and one Cunning Wish to bring in 4 Duress, Deep Analysis, Zombie Infestation, Ghastly Demise, and Circular Logic.

Wolfman would have been able to play a turn four Wake but he could not activate his Krosan Verge at the end of turn three with two Skyshroud Expanses. With his head shaking he played a Forest. Rich gave him a window of opportunity by tapping out for Deep Analysis, "Do you have the five drop? Which way are you going to go—gold or brown?"

"How about this one?" Wolfman played the Mirari's Wake. Hoaen nodded and played his broken gold card—Psychatog.

Wolfman flashed back a Deep Analysis and hard cast another one. "Am I dead?" asked Hoaen.

Hoaen felt that Exalted Angel was not sufficient to scoop and he soldiered on. Tog ran into the 6/7 Angel and some cards were discarded and a few removed from the bin but Wolfman had the Moment's Peace. When he played the Compulsion on the next turn, Hoaen was convinced.

While they were preparing for the next game, David Rood sauntered by and seemed startled that both Wolfman and Pollock's matches were knotted at one game apiece. I asked how Pollock's match looked in testing and Wolfman could only shake his head grimly.

Hoaen offered to tell the story of how Wolfman's team came to be known as 2020. Apparently it was the average Limited rating of the three teammates. "We thought about naming OUR team 2085 to upstage them!"

Wolfman was unimpressed with their gaudy ratings, "We would just change our name to 20K—we've won $20,000 this year!"

"How much have you won in singles?" 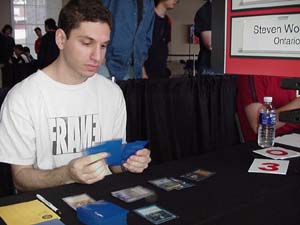 "$500...But we're getting another $1,000 here today," sighed Wolfman, no doubt recalling the playtest results.

"Hey Wolfman, I'm surprised you haven't made the lame joke about getting the cards you loaned me back."

"I thought I would wait until damage was on the stack but... What the hell! I'll do it now. Cards, please!"

Wolfman attempted a turn two Compulsion but all he managed was a virtual Shock when Hoaen used two Underground Rivers to Counterspell the key card in this match-up. Hoaen took another point when he played his turn three Psychatog. Wolfman answered with the dreaded turn three morph. A turn later the Exalted Angel threatened to make short work of the game but Hoaen Cunning Wished for a Chain of Vapor and returned the Angel to the Wolf's hand—he could not afford to ship the Chain back since he was missing his fifth land drop.

Wolfman tried to Wrath away the Tog but Hoaen's Circular Logic tied him up. Hoaen chipped away with his Tog and Concentrated for more cards. When Wolfman replayed the morph Hoaen had another Logic at the ready. A Duress on Hoaen's next turn revealed Memory Lapse, Cunning Wish, Counterspell, Mirari and another Angel. He took the Mirari and dug for three more cards with another Concentrate. He attacked for three and removed a Circular Logic from the game to have it accessible by Cunning Wish.

Wolfman played his face down Angel but Hoaen had the Innocent Blood. Finally after digging and digging, Hoaen played a Compulsion. After a brief counter war it resolved. On his own turn, Wolfman Cunning Wished for Ray of Revelation and tried to smoke the enchantment. Hoaen sac-ed it to draw a card. Wolfman tapped out in an attempt at another morph but Hoaen had the heart breaking mid-game Force Spike. "I suck!" cried Wolfman.

A couple of turns later Hoaen found another Compulsion and Wolfman forgot to flashback the Ray at the end of his opponent's turn and had to wait until the end of his own turn after Hoaen used it a few times.

Hoaen Duressed his opponent and saw two lands. He flashed the Wolf an Upheaval and a shiny Zombie Infestation and they moved on to Game 4. "Stupid Force Spike!"

"I had the Blood as well. That Angel wasn't going anywhere!"

Wolfman led off the game with a Krosan Verge and looked like he was going to be in good shape with a Compulsion waiting to land in play on the next turn. Duress stripped the Compulsion away and left the Wolf holding four Islands and a Wrath.

Compulsion hit play for Hoaen on the third turn and he was feeling pretty good about his chances: "I am definitely winning now!"

"Unfortunately for you, I own half your permanents and I would like them back now." 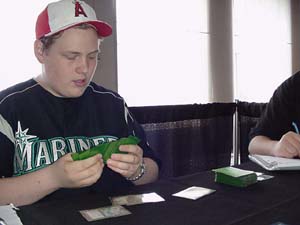 Two Duresses over the next several turns took away the Wrath and revealed that Wolfman was drawing nothing but lands. Meanwhile Hoaen was casting Deep Analysis and Concentrate while compulsing at the end of every turn. His hand consisted of three Counterspells, two Circular Logics AND a Concentrate.

"You have only two chances of beating me. One is if I pull a Gary Wise and sac a Delta at one..."

"If Gary hears me saying that and beats the crap of me."

Wolfman refused to concede despite the fact that he had fewer cards in hand than Hoaen had counters. Finally, after Upheavaling and playing a Tog Wolfman laid down his hand and Hoaen was going to Berlin.