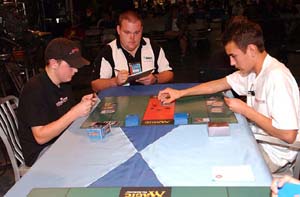 The Top 8 is underway. Richard Oleksak finished second in the Swiss portion of this event with Psychatog, while Sam Stein used his Red-Green beatdown deck to power his way to a seventh place finish. This quarterfinal match will be played the same way as the rest of the event, two out of three games to determine who will advance to the semi-finals.

"Just relax," head judge Elaine Chase mentioned to the competitors. "Ignore the lights and the people and the television cameras." This got a nervous chuckle out of the competitors. Tension was running a little high at this point.

Richard and Sam shuffled up their decks in complete silence. This event is all about business. The entire Top 8 was untimed, so the competitors took their time as they shuffled in silence and shuffled again.

Richard finally becomes the first competitor to break the silence, stating "I'll play first," before scooping up his opening seven cards and deciding to keep. Sam also chose to keep his first seven cards, and the party started.

An early Llanowar Elves got removed from the board by Chainer's Edict. It didn't seem to faze Sam though, as he just replaced the elf with the much more effective Wild Mongrel. The Mongrel received company on the table almost immediately in the form of two Grim Lavamancers. Richard allowed both the 'mancers to resolve, despite the presence of Counterspell and Memory Lapse in his hand. When he used his open mana to Smother the Mongrel is became obvious that he considered it more of a threat than he did the Lavamancers.

A fist pump from Richard is the first emotion of the match. Sam tried to cast Elephant Guide on his Grim Lavamancer, and in response Richard Smothered it. A turn later Richard cast Future Sight, getting one part of his Psychatog engine into play, but leaving himself tapped out and allowing Sam to cast anything he would like. He took advantage of the momentary opening in 'Togs counter magic to put a Phantom Centaur on the table.

The Centaur swung once to bring Richard down to eleven life. After Richard countered a Grim Lavamancer, the third one of the game, Sam was able to force a Volcanic Hammer into the head of his opponent.

"That's it," Richard lamented as Game 1 ended. The red-green deck from Sam was able to keep the lone Phantom Centaur on the table and Richard went down. This is a matchup that people think is firmly in the favor of red-green and it played out that way in Game 1.

Sam removed four copies of Elephant Guide and a Volcanic Hammer, replacing them with three copies of Compost and two Naturalize.

Richard removed three Force Spikes, one copy of Psychatog, Circular Logic, two Duress and a single Upheaval. He replaced them with three Engineered Plague, three Hibernation and two copies of Delusions of Mediocrity.

"You were second seed," Sam asked Richard during the shuffling. There was some confusion with where the players belonged. The nameplate on the table across from Richard was that of Peter Madsen, the sixth seeded player, who was sitting across the room playing his proper match. The confusion actually was probably a good thing, as it lightened up the mood with these two intensely serious players.

The two players shuffled up their decks, but under the instructions of one of the judges they did not begin play. The television cameras moved into position behind the players, adding a little extra pressure, as the second game of their match would be broadcast into the convention arena, complete with commentary by Randy Buehler and Mark Rosewater.

Sam led with three Llanowar Elves in two turns, and while he was playing with his hand he showed the fourth one to the crowd around the table. The Llanowar Elves appeared to be overextended a turn later though when Richard played an Engineered Plague. He picked up one of the Llanowar Elves while the crowd chuckled.

"Ummm, Elves," he said. The crowd laughed a little more. 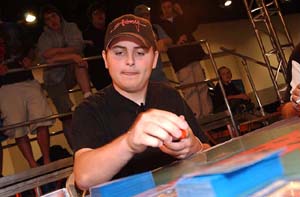 "Concentrate," Richard announced. Without counter magic in his red-green beatdown deck Sam could do nothing but nod. It was the second Concentrate that Richard had played, refilling his hand and leaving Sam with only one card in hand. Despite the presence of three creatures on his side of the table Sam couldn't make enough damage come through that an attack phase would be worth his time.

Richard put Future Sight on the table and turned over the top card of his library. A slight groan escaped from Sam as Richard revealed Engineered Plague sitting on the top of his library. Sam finally decided to attack. He was able to force three damage through when Richard blocked his elephant token and decided to take the damage from Basking Rootwalla. Richard's life total dropped to thirteen, but a Delusions of Mediocrity off the top of the deck brought him back up to 23.

Chainer's Edict killed a Basking Rootwalla and Richard appeared to be in control. Psychatog swung for one and Sam responded by hitting Richard with the ability from his Grim Lavamancer. After Sam drew his card for his turn he scooped, electing to just go to Game 3.

Richard took a look at his sideboard between games two and three and decided not to make any changes. He seemed happy with the way the deck had worked Game 2.

Sam took a look at his sideboard and decided to try something a little unconventional. The three copies of Compost he had added a game ago were removed, replaced by three copies of Threaten.

During the shuffling Sam asked the most crucial question of the game so far. "How much did they pay you to wear that shirt," he remarked to Richard. Richard is wearing an Mtgsource.com t-shirt for the Top 8 portion of this event, and the people sitting around the table were a little shocked to here that he was paid "a couple hundred bucks" in sponsorship money to wear it for this event.

"They're my friends too," he mentioned. Well, it was nice of them to help him out then. The conversation wandered around topics, mostly how much Richard hates shuffling, until Sam decided to play first, as he pointed out, "For the first time this morning."

The early going was a little slow, as Sam played creatures and Richard destroyed them. For three consecutive turns this pattern continued. A Llanowar Elves got Smothered. A Grim Lavamancer got Edicted. A Basking Rootwalla also felt Chainer's wrath. Finally though Sam was able to a get creature to stick to the table, a Phantom Centaur hit the table and stayed. Then a Grim Lavamancer joined it. Richard cast Hibernation and asked Sam to pick up his Phantom Centaur though moments later. 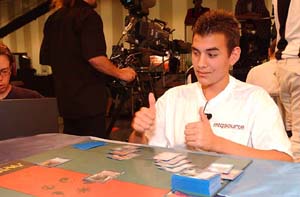 Richard appeared to be a little nervous around this time. He had missed three consecutive land drops, leaving him with only two Islands and a single Swamp on the table. Finally a fourth land came off the top of his deck. The problem was that that land was a Polluted Delta, and with his life total at only eight he had to be concerned about running headlong into burn.

"You have two cards," Richard asked Sam. He knew one of them was the Phantom Centaur that did some hibernating earlier, but he was unsure of what the other card. He decided to sacrifice the Delta and go to five life, using the four mana to cast Delusions of Mediocrity to raise his life total to fifteen. He was holding a second Delusions of Mediocrity though and could prolong this game even more.

Richard's life total fell to five as Sam swung with another Phantom Centaur. The Centaur and the Grim Lavamancer did their damage, but Richard appeared to almost laugh it off. The second Delusions of Mediocrity was cast, but the life it granted disappeared quickly. A turn later Richard was down to four life. His Psychatog sat alone on the table. He had made only four of his eleven land drops, and two of those were Polluted Deltas.