Quarterfinals: Right Off the Top

Welcome to the Quarterfinals of PT–Valencia. Coming into the Pro Tour one of the prevailing theories was that the Extended metagame was so wide open that it would be difficult for control decks to thrive facing so many different threats to try and contain. This hasn't proved to be the case as the aggro decks mostly got eaten alive with only an Affinity and a Zoo deck surviving to the final stages.

This Quarterfinal pits two previously unknown players, Remi Fortier of France and Tine Rus of Slovenia, against each other. Initially I'd been told this was a Gifts Rock mirror and I was tempted to bring in a pillow or possibly a heavy injection of caffeine to get me through the long protracted war of attrition that would have meant. Fortunately the information was incorrect. Fortier is running a Counterbalance / Sensei's Divining Top control deck with Dark Confidants and Tarmogoyfs. When I asked him beforehand he didn't feel too confident about the matchup. Counterbalance isn't so good when your opponent's threats are fairly expensive, and Pernicious Deed is rather one-sided when it only blows up your stuff.

After a mulligan Rus led off with a Cabal Therapy naming Dark Confidant. The Therapy whiffed and Fortier was able to use a Chrome Mox to power out Counterbalance on turn one. On turn two he summoned a Trinket Mage to fetch the other part of the combo: Sensei's Divining Top. He couldn't really ask for a better start in the Quarterfinal.

Rus went for a Living Wish, only for the Top to float a Dark Confidant to the top of Fortier's library for Counterbalance to counter it. With the added security of a Counterspell in hand, Fortier was in a dominant position. His Trinket Mage continued to whittle down his opponent's life total.

Rus next tried for Collective Restraint to lock out the red zone. Fortier didn't bother trying to spin the top and instead used one of his hard Counterspells to say no. Next turn Rus went fishing with Duress to see if the way was clear for his Ravenous Baloth. It wasn't. Counterbalance took care of the Duress and a second hard Counterspell sent the Baloth packing.

Fortier looked to be in total control, but made a slight blip when he forgot to attack with the Trinket Mage for a turn. It was unimportant. Venser, Shaper Savant was on hand to delay Rus's Gifts Ungiven, and by the time Rus got to untap to try again he couldn't find an answer he could play in the same turn.

Rus opened with Duress this time and probably wished it was Cabal Therapy; Fortier had two Dark Confidant in hand. He also had two land, a Trinket Mage, and Venser. So this time the normally reliable Duress managed to whiff, effectively balancing out the mulligan Fortier had been forced to take.

This game Rus had the fast start (for Gifts Rock anyway!). A second-turn Birds of Paradise allowed him to power out a third turn Gifts Ungiven. This netted him a Smother and Vindicate and Fortier put an Eternal Witness and Loxodon Hierarch in the graveyard.

Fortier fetched Sensei's Divining Top with the ever-useful Trinket Mage. His second-turn Dark Confidant perished to Smother and with a Pernicious Deed in play Rus looked set to start grinding it out.

At the end of Rus's turn Fortier tried to find a bit of gas with Thirst for Knowledge. Rus took the opportunity of his opponent being tapped out to fire off a second Gifts Ungiven. This gave Fortier the choice of Collective Restraint, Loxodon Hierarch, Cabal Therapy and Eternal Witness. The Therapy and Witness were sent to the bin. 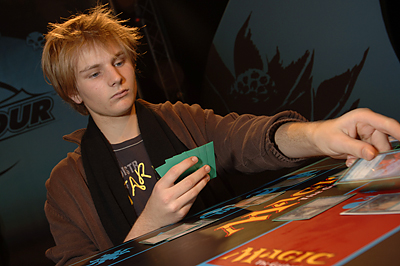 Fortier made a 2-0 run…Rus went for an Indrik Stomphowler, I'm guessing with the aim of taking out Fortier's Divining Top with his Deed in response to the Fortier trying to save it. There was no need for any of that nonsense as Fortier was on hand with Venser. Even with the security blanket of the Deed Rus had to be a little careful. The motley Wizard beats had dropped him to a fragile 3 life. In his turn he floated white mana with the Birds of Paradise and then flashed back Cabal Therapy (naming Counterspell) to clear the way. He went for the risky play of a big Dragon: Teneb, the Harvester.

It was ultimately too risky. A spin of the top found another Counterspell, and one attack step later Fortier was now just a single game away from the Semifinals.

Rus got one of those Rock starts that just shreds the opponent's hand with pinpoint discard. Duress hit Sensei's Divining Top, Therapy took out Thirst for Knowledge. Rus wasn't done there, either. He fetched back Therapy with an Eternal Witness and ripped out a Venser and Tarmogoyf for good measure.

Amazingly, Fortier still had game after all this. He managed to get Counterbalance into play and then retrieved the earlier discarded Top with Academy Ruins to set up the mini-combo.

It still wasn't good for the Frenchman. Rus had a Deed out and was bashing his face in with Loxodon Hierarch. Fortier managed to counter the second Hierarch with a second elephant of his own sitting on top of his library. His Hierarch came in to bring him back up to a healthier 5 life. His board position didn't look so bad either. He had Counterbalance, Top, Dark Confidant, and his own Hierarch.

It was only an illusionary advantage though. Rus still had the Pernicious Deed, and he decided this was the best time to let both players start again, especially when he followed with Eternal Witness fetching back a Loxodon Hierarch.

Fortier still had the Top, though. This found him a Tarmogoyf, and that was enough to hold off Rus's forces. A Jitte threatened to give him a little wiggle room, only for another Deed to rub out everything with converted mana cost of two or lower.

Rus hadn't quite won yet. Putrefy took down the Elephant as the Witness knocked Fortier down to 3 life, then 1.

Could Fortier come back and take the game and match? Rus seemed unhappy with his draws and Fortier still had a Top to dig for answers, although his single point of life meant he wouldn't be able to use sac lands to flush away any rubbish from the top of his library. Having access to all five colors of mana proved to be useful for Fortier as even an Indrik Stomphowler wasn't big enough to get out of range of his Explosives.

Then Rus found Gifts Ungiven. Surely this would put the game away?

Teneb, Eternal Witness, Genesis, and Living Wish. How would you like to die?

Slowly, as it happened. Very slowly. Fortier tried to cling on in face of inevitability, but eventually Genesis thudded through.

Fortier had to mulligan for the fourth game and immediately found himself another card down as Cabal Therapy connected with the Dark Confidant he had in hand.

Nothing much exciting happened in the first few turns. Fortier had a Jitte, but no one around to carry it. He used up Explosives just to kill Rus's Birds of Paradise. That felt a little wasteful.

The action cranked up a notch afterwards. Rus commenced beating with a 4/4 Loxodon Hierarch, while Fortier found a Dark Confidant to carry the Jitte. Rus tried to foil any attempts to accumulate counters on the Jitte with the old classic of Sakura-Tribe Elder. Fortier wasn't going to let this happen as he Putrefy'd the annoying Snake Shaman out of the way.

Gifts Ungiven looked ominous again, netting Rus Deed and Genesis and putting Teneb, the Harvester and a Stomphowler in the graveyard. The Deed took out both Dark Confidant and Jitte, while Rus's Elephant was free to continue molesting Fortier's life total.

A Tarmogoyf arrived to tower over Rus's Hierarch as Fortier again showed he wasn't about to lie down that easily. Unfortunately for him, a Vindicate meant the Tarmogoyf wasn't going to hang around long, and that left the way clear for Rus to crash through with a multiple assortment of Elephants, Beasts, and Incarnations.

After a little under two hours playing time, Rus had finally pulled the match back to all square.

There was no explosive start for Fortier in the decider, and Rus again fired off a Cabal Therapy in search of Dark Confidant. It missed but quickly came back to take out a lone Counterspell. 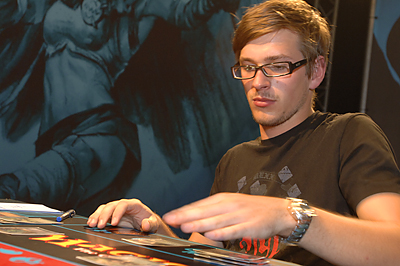 Rus countered with a 2-0 of his own…Lacking artifacts, Fortier was forced to throw both a Tarmogoyf and Dark Confidant to Thirst for Knowledge. The second Tarmogyf appeared and was joined by a Top-fetching Trinket Mage. The 'Goyf hadn't quite grown up yet, though, and Rus was still free to get some swings in with a Loxodon Hierarch. He brought a second to the party, sniffing a place in the Semifinals.

When both Elephants charged in Fortier gave Rus something to think about as he threw all of his men—Dark confidant, Tarmogoyf and Trinket Mage—in the way of one of them.

The Slovenian played it safe and killed the Confidant and Trinket Mage. He added Ravenous Baloth to the beats...

...only to see his fatties blown to bits by a pinpoint Engineered Explosives.

Now Fortier could take the offensive with his Tarmogoyf. His advantage didn't last too long, though, as Gifts Ungiven put Genesis and a Witness in the graveyard and gave Rus Indrik Stomphowler and Teneb. Fortier simply added a second Tarmogoyf, trying to overpower the Slovenian player before the card advantage from the Gifts Ungiven began to bite.

Rus finally sac'ed the Elder to fetch the sixth land he needed for Teneb. He went for the big dragon.

... and found a Counterspell!

What a heartbreaker for Rus. The Slovenian player visibly slumped in his chair.

Both Tarmogoyfs crashed in for 8 damage. It looked very grim indeed for Rus's tournament survival. He thought in his upkeep for a while before digging back Teneb with Genesis. Fortunately he'd drawn the land he needed and was able to make two Sakura-Tribe Elders as chump blockers.

Fortier played a Thirst for Knowledge and spun the top so he'd be able to draw and discard it to Thirst. That found him a Dark Confidant.

It was another tough upkeep call for Rus. He chose not to use Genesis this time. He Putrefy'd one Tarmogoyf and then played Eternal Witness with the aim of repeating the process on the other 'Goyf.

And was thwarted by another Counterspell.

Dark Confidant and Tarmogoyf crashed in. The game was balanced on a knife-edge. Fortier was at 4 life, Rus 3.

The Slovenian player went for the big Dragon again. If it stuck he would win, if it didn't, well...

No Counterspell this time, but there were any number of cards that would end it. All Fortier needed to do was find a way to remove the dragon. He dug deep with Thirst for Knowledge.

Then it was upkeep and time to ask Bob. Fortier needed a Venser, but if Bob flipped it over that would be game to Rus right there as Fortier was only on 4 life.

Fortier went down to 1 life but it didn't matter. Putrefy was enough to take down the dragon and clear the way for Dark Confidant and Tarmogoyf to take the game and match. 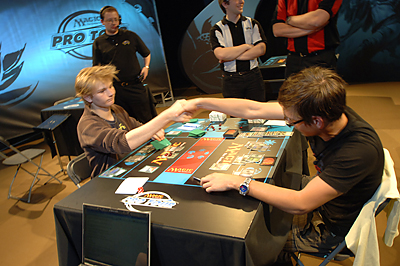 Remi Fortier advances to the Semifinals.