Quarterfinals: Rising to the Occasion

Denniz Rachid has been on fire recently. By posting back to back Top 8s at Pro Tour Dark Ascension and now at Pro Tour Avacyn Restored this weekend, Denniz Rachid locked himself up for Platinum level in the Pro Players Club and guaranteed himself as the captain of Sweden's World Magic Cup team. Having already earned these prestigious (and lucrative) honors, Denniz Rachid now finds himself within three matches of accomplishing yet another amazing feat: becoming a Pro Tour Champion.

But Rachid has a tough road ahead of him, beginning with Grand Prix Kobe finalist Ken Yukuhiro.

Now Yukuhiro might not be a household name outside of Japan yet, but it's only a matter of time before that changes. Both Shuuhei Nakamura and Yuuya Watanabe have confidently stated that Ken Yukuhiro is Japan's "Next Big Thing", and a Top 8 here certainly seems to vindicate that assertion. 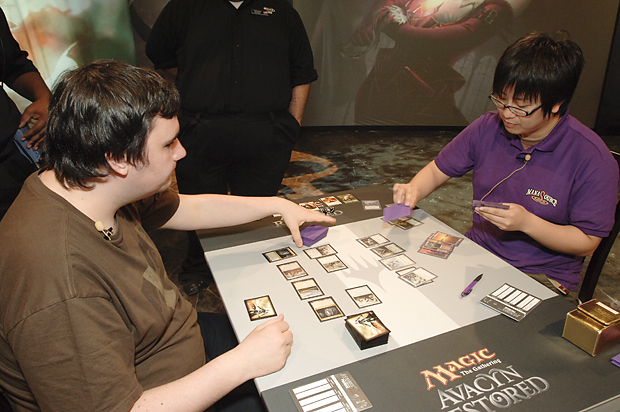 While Denniz Rachid has locked up Platinum in the Pro Player's Club, his opponent Ken Yukuhiro is making a name for himself outside of Japan.

Rachid opened with a Champion of the Parish and a Thalia, Guardian of Thraben, while Yukuhiro began the game by casting two Mulches, filling his hand with lands and his graveyard with Fiend Hunter, Borderland Ranger, Cathedral Sanctifier, Angel of Glory's Rise, and Unburial Rites.

With all of the pieces in place for Yukuhiro to Unburial Rites back a devastating Angel of Glory's Rise as soon as he hit five mana, Rachid knew that he needed to win fast. And a Silverblade Paladin certainly seemed like it would help.

Falkenrath Aristocrat came down for Yukuhiro, and suddenly the Japanese pro was in a position where he would be able to make an infinitely large flier should the Vampire live through the turn.

However, another Silverblade Paladins forced Yukhuhiro to chump block with his Falkenrath Aristocrat, and left the Japanese pro at a mere 2 life before he was finally able to Unburial Rites back his Angel of Glory's Rise.

When a second Unburial Rites brought back the Falkenrath Aristocrat, Rachid knew that he wasn't long for the world. 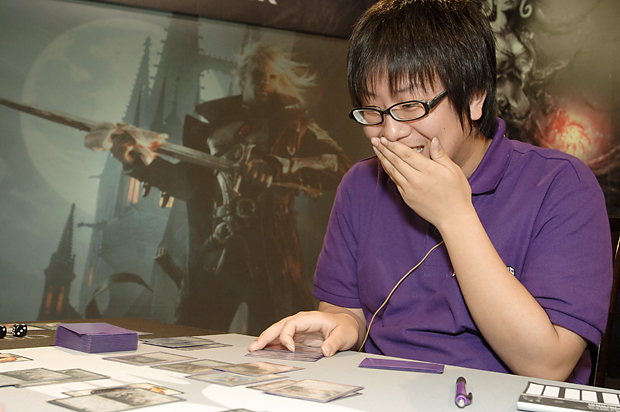 Oh? Is this a loop that I have going here?

After looping through the combo several dozen more times, Yukuhiro attacked with his arbitrarily large Falkenrath Aristocrat to give himself a quick 1-0 lead in the match.

Rachid opened the second game with a Thalia, Guardian of Thraben and a Silverblade Paladin (which he immediately paired), while Yukuhiro could do nothing more than cast a Faithless Looting and a Cathedral Sanctifier.

Yukuhiro missed his fourth land drop and was unable to cast any of the spells in his hand, and because of his opponent's Thalia, Guardian of Thraben, he couldn't even flashback his Faithless Looting. Without the ability to do anything, Yukuhiro had to pass his turn without making a play. Another missed land drop later, he found himself shuffling for game three.

Cavern of Souls allowed Rachid to open the third game with a Champion of the Parish followed by two copies of Avacyn's Pilgrim. While Yukuhiro looked to set himself up for the long game with a Cathedral Sanctifier and a Borderland Ranger.

A Mayor of Avabruck and a Thalia, Guardian of Thraben sped up Rachid's clock, while Yukuhiro played a potentially menacing Falkenrath Aristocrat.

After a couple of big attacks left him at 6 life, Yukuhiro cast a Blasphemous Act, and while it was still on the stack he sacrificed his Borderland Ranger to make Falkenrath Aristocrat indestructible. 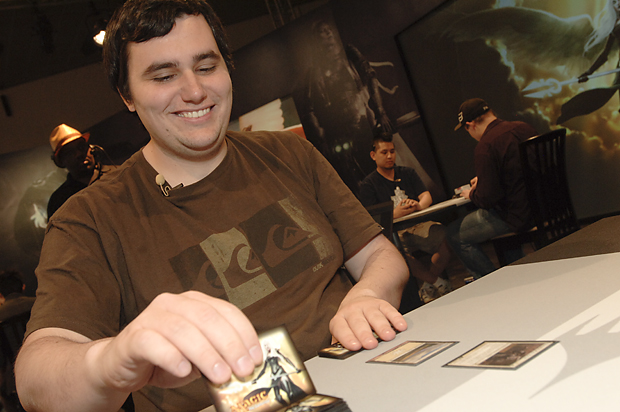 Rachid forces Yukuhiro to pull the trigger on his sweeper spell.

While it seemed like Yukuhiro was about to take over the game at this point, it turned out that the Japanese pro was out of relevant spells. Meanwhile, Rachid had a Champion of the Parish, a Fiend Hunter, and a Silverblade Paladin to take the game before Yukuhiro drew one of the many game-breaking cards in his deck.

Denniz Rachid looked like he was ready to come out with a bang in the fourth game when he opened with a Champion of the Parish. But without any cheap creatures to follow it up with, that bang ultimately turned out to be little more than a whimper.

While Rachid's deck was busy floundering, Yukuhiro began putting some serious pressure on the board with a Huntmaster of the Fells and a Geist-Honored Monk.

Rachid looked to put a lot of pressure on early with a Thalia, Guardian of Thraben and a Silverblade Paladin, but Yukuhiro's third-turn Fiend Hunter exiled the Silverblade Paladin and completely shut down the spell-light Rachid's offense.

At this point, Rachid desperately hoped to draw something relevant so he could put away the match before Yukuhiro drew the lands that he needed to cast the many powerful spells in his hand.

After the two players passed their turns back and forth for a while, Rachid drew a Druid's Familiar and a Gavony Township that allowed him to kick his offense into high gear, and he threatened to end the match in a hurry... 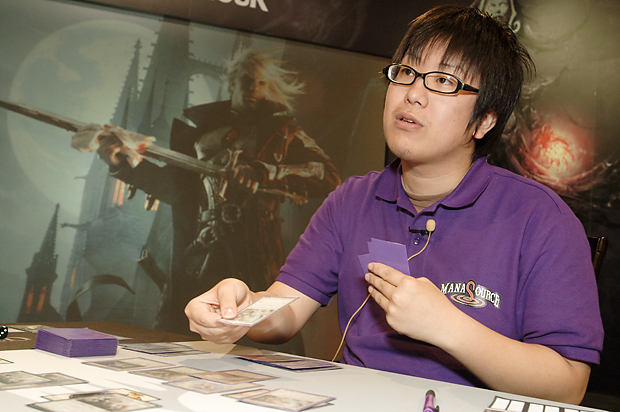 But just as Rachid was getting ready to finish the job, Yukuhiro drew his fourth land and cast a Huntmaster of the Fells. And while Rachid still had an absolutely dominating board position at this point, a Restoration Angel bought Yukuhiro all the time that he needed to cast his Blasphemous Act and wipe the slate clean.

At this point, Rachid was completely out of threats, and an Angel of Glory's Rise was enough for Yukuhiro to seal the deal.

Ken Yukuhiro wins 3-2 and advances to the semifinals!