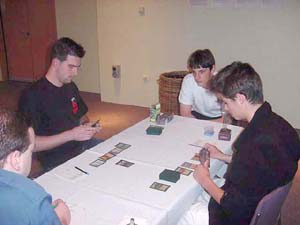 The quarterfinals are upon us and the top seed and defending champion Rob Nadebaum takes on Sydney's young Sam Kissajukian, who has been playing for only 6 months and qualified through a grinder on Friday. Rob is playing his team's (Card Heaven) version of the old IBC deck – Goblin Trenches while Sam is playing "Wurmbies", a black/red/green deck that uses discard for advantage.

Rob wins the toss enabling him to lapse and then counter Sam's Wild Mongrel, on the fourth turn he casts a Goblin Trenches, leaving Sam open to resolve a Zombie Infestation. From here it the 6th turn before Sam again tries his luck with another mongrel, getting through to have Rob casts Prophetic Bolt on it. Sam response by making a Zombie with a land and a Fiery Temper on the mongrel, causing the bolt to be countered. The Zombie itself deals 2 damage to Rob before being Urza's Raged into the graveyard.

Again both players hold off for a few turns, as both seem to tire of taking from taking damage from pain land. Then the Goblin/Soldier (hereby known as "dudes") tokens come... Whatever Sam put out Rob seemed to have the answer for, whether it be a Prophetic Bolt, a Repulse, a Syncopate or just 6 dudes a turn out of his ever-diminishing land supplies.

Whether Sam tries to make Elephant, Zombie or Wurm tokens, they only seem to come out one per turn. Rob won the Game with only 2 land in play, despite a successful Violent Eruption that picked no less than 4 of them off. Within 4 turns Sam's game is over taking 2, 4, 6 then 6 for the win. 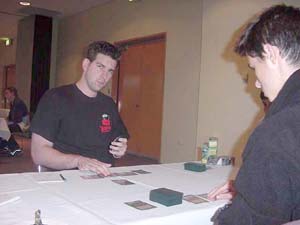 Sam elects to play this time, mulliganing his hand, then going his next 6 playing a Shivan Oasis. In Rob's draw step after Rob has drawn, he announces has actually taken 7 cards and that 2 had stuck together. The quarterfinal table judges (in this situation, me) had been given the directive not to enforce procedural errors in the top 8 that did not effect the game in anyway, so Sam escaped with a warning and the offending card was sent back to the top of his library. Letting the game continue, Rob drew another card having lost track of what step he was at but after a good natured laugh between players they manage to finally sort the game state out and get the game back on track.

A 2nd turn Wild Mongrel (Sam) was followed by an Infestation that was countered. A 4th turn Flametongue Kavu by the man he rest of team heaven call "Edge", saw the mongrel's last dying act was reducing the cost of the Violent Eruption that removed the Kavu with it (Rob -14).

Surprisingly here Sam went on the defensive dropping a Pernicious Deed effectively stalling the match, as Rob dare not push any quicker as he only has 2 Trenches. A Duress removed a Counterspell as Sam took 4 damage to the head from a Prophetic Bolt, underneath it all Sam was able to send a Fiery Temper back to Rob. But ultimately Rob's card advantage playing trenches with its 4 Fact or Fictions would give him the edge. 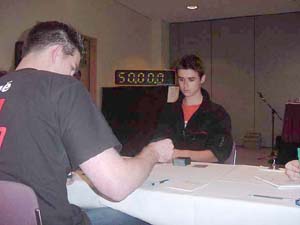 A second Wild Mongrel caught another Prophetic Bolt and the Zombie Infestation was Absorbed as Sam had trouble keeping permanents on the table. It wasn't until the 12th turn in a Fact or Fiction, that Rob's first Trenches was seen, and to get he had to give away enough burn to make the trenches the only win condition in the deck.

Sam was forced to pay the full 5 mana for an Arrogant Wurm, which was met by a Flame tongue Kavu. They poise and patience that Sam had showed earlier was now revealed here as they traded 3 Flametounge Kavus. Eventually Rob dropped the Goblin Trenches which were duly Deeded away. . The second Trenches were then mised in the Fact or Fiction with a Co:P green also being able to be taken.

The Trenches again hit the table meaning that Sam absolutely had to resolve the Deed in his hand. A Duress revealed a Fact or Fiction, a Counterspell and an Absorb, of which the latter was removed of course. Unfortunately he only had a Fiery Temper and a Violent Eruption which was not enough bait for Rob (now at 6) to take as the deed was of course countered. Next turn, 10 dudes swarmed in for the win and for the second year in a row Rob Nadebaum heads for the World Championship.

This year however, he can take the bus.