Sean Fitzgerald is no stranger to Grand Prix Top Eights; he won Grand Prix Phoenix just over a year back. Robert Dougherty has a list of accomplishments as long your arm, winner of several major team events with Your Moves Games, and has a pair of PT Top 8s to his name as well. Fitzgerald seemed excited, while Dougherty was cool and calm, with the legendary YMG patience. 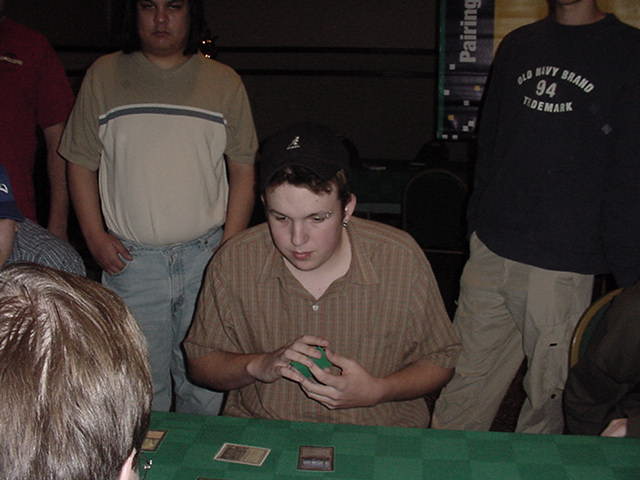 This match-up features green/black on green/black, but it's not a mirror really. Dougherty is using YMG's new deck, an Ashen Ghoul/Wild Mongrel/Zombie Infestation beatdown machine. Fitzgerald is with Sol Malka's Living Death deck. While his creatures are significantly larger than Dougherty's, Rob's are just more resilient, coming back over and over again.

Both players kicked off with a flurry of discard, Dougherty nabbing a Phyrexian Furnace, while Fitzgerald nails one of the key cards in Rob's deck: Zombie Infestation. A Wild Mongrel comes down for Team YMG, and deposits a Ghoul and Horror in the bone yard for him. However, the sheer size of the Phoenix local's creatures shuts it down after just a couple of hits. (Between Spirit Monger and Phyrexian Negator, Dougherty's Puppy is seriously outclassed). A deed from Fitzgerald clears out the hound, and opens the path for a serious beating. A last ditch Firestorm from Dougherty tries to clear them out, but it's just too small to stop the beasts.

Game two kicked off with another fast start from Dougherty, slamming down a Wild Mongrel on the 2nd turn, and a Hermit Druid on the 3rd. The druid did his job the next upkeep placing nearly thirty cards into the graveyard. This included a number of Squee, Goblin Nabobs, Krovikan Horrors and a trio of Ashen Ghouls that came out swinging (as if this was not ridiculous enough, several Call of the Herds sat quietly in the graveyard, waiting for a chance to stomp face, they never got to play). A couple of rounds later, it was all over, Fitzgerald just buried under a mountain of card advantage. 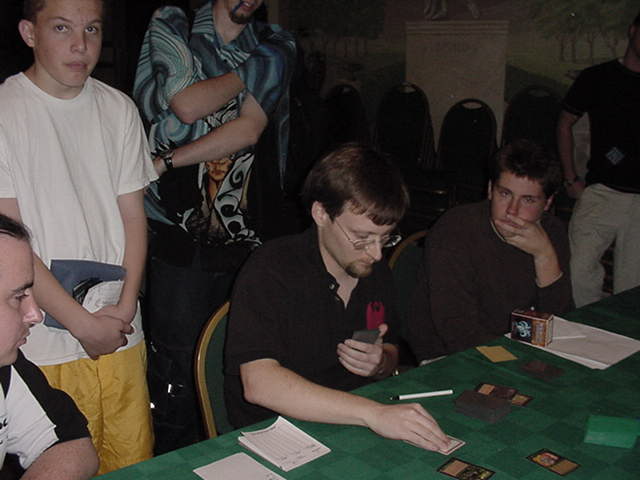 Sean gets off to a much faster start this time, with a pair of elves, but Dougherty's Hermit Druid is staring him down again. Fitzgerald makes a game attempt at stopping the Druid by Dust Bowling lands, but unless he can come up with a way to actually kill it, he's staring down a time bomb. The druid does his trick before Fitzgerald can kill it, but this time it hits a swamp much higher up in the deck. Only getting Dougherty a pair of Squees and a Krovikan Horror, no Ashen Ghouls in sight. With only basic swamps to operate with (and just two of those) the YMG'er can do little more than discard. Of course when he discards the pair of Ashen Ghouls he's been holding onto it becomes apparent that two swamps is plenty. Fitzgerald fights back gamely, bringing out a Yavimaya Elder and Spike Feeder to start making more favorable trades with the Ghouls. Then the monster hits, Spiritmonger, followed by another. Now Dougherty is staring down a real problem. His deck removes creatures by either gang blocking or Firestorms, neither is particularly effective against Spiritmonger. A Deed puts an end to any thoughts of chump blocking and his beefy Mongers swing over for lethal damage.