Yoshitaka Nakano was sporting color-coordinated hair for this Top 8, with a shock of green against the black to match his Rock deck. He apparently played a red-black deck last year at Worlds with similarly matched hair. The Fujita protégé was not thinking about his hair this morning though, as he felt that this was a very tight match-up that could very well be determined by the very first play of the game. 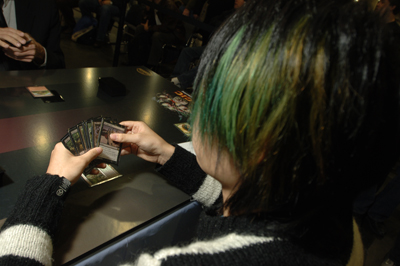 Yoshitaka Nakano is running green-black.It was Nakano's belief that he would win or lose this match based on how often Patrick Chapin led off the game with Spinerock Knoll and could power out a quick and nasty Dragonstorm.

Chapin's Dragonstorm Update is the breakout deck of the tournament. Chapin became aware of a primordial version of the list from a side event at Grand Prix–Daytona and worked on it with fellow Top 8 competitor Gabriel Nassif as well as Mark Herberholz. While the deck did not post any perfect records, it did propel six different players to 4-1 records and two of its pilots into the Top 8.

Chapin—also fashion-forward in his black suit and narrow tie—was nervous about his match-up as well although he thought he had a narrow edge. Nakano's deck was capable of some explosive draws. If Dragonstorm was the breakaway deck of the tournament, then The Rock was the pace car. There were five different green-black creations in the Top 8. Nakano and Mori were running the most aggressive models with Wren's Run Vanquisher potentially serving for 4 damage on turn three when paired with an Imperious Perfect. When you combine that kind of beatdown potential with Thoughtseize against a deck that is trying to sculpt the perfect hand for the perfect turn... well, Patrick—who was playing in his first Pro Tour Top 8 in over eight years—was not entirely comfortable with his chances of advancing to the Semifinals.

Nakano seemed to relax a little when Chapin led off the Quarterfinal action with a Snow-Covered Mountain and not the dreaded Spinerock Knoll. Nakano had a Llanowar Elves, but it was Shocked on Chapin's turn as he also suspended a pair of Lotus Blooms on turn two. He obviously could have suspended at least one of then the turn previous, but he was managing his time to a specific effect and wanted to make that he could fully exploit them for storm purposes.

We had our first Pro Tour Top 8 appearance for a planeswalker when Garruk Wildspeaker came into play and made a 3/3 Beast token. Bogardan Hellkite took them both down on Chapin's next turn.

Civic Wayfinder—a card that was not good enough for Ravnica Block Constructed but somehow found itself in two different Top 8 Standard decks—stole its way onto the big stage and found a Swamp for Nakano who fell to 11 on the attack from the dragon. He cracked back with the Wayfinder and a Treetop Village. Chapin dropped to 15. Wren's Run Vanquisher joined the Japanese player's team. He fell to 6 from Pat's next attack. Pat went to 7 and Tarmogoyf meant he needed to have a burn spell to win the race.

Patrick attacked with the Dragon and calmly placed an Incinerate in the middle of the playmat.

"These things are still three out five, right?" asked Chapin. 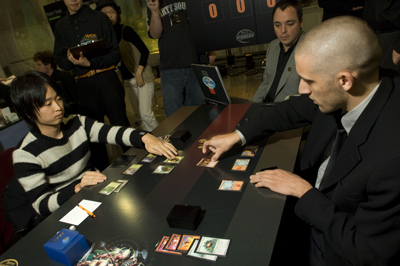 Nakano faces off against Pat Chapin's Mountains.Chapin went back to the well for a fresh bucketful of cards. Once again Chapin elected not to suspend Lotus Bloom on the first turn and had two ready to go on the next. Meanwhile, Nakano came out fast with Wren's Run Vanquisher into Imperious Perfect—essentially a Ravenous Baloth on turn two. Patrick smoked the Elf lord with Rift Bolt and fell to 13 on Nakano's next attack. The post-combat Tarmogoyf warranted another Rift Bolt.

Thoughtseize revealed the same three-card hand from Game 1 with the same result—Nakano made Chapin discard Dragonstorm. Chapin passed the turn with his Lotus Bloom and Hellkite ready. Nakano chose not to activate his Treetop Village, and Hellkite shot the Elf down. Nakano returned the favor to the Dragon with Eyeblight's Ending.

It was time for a little card advantage with Masked Admirers. Another Thoughtseize from Nakano saw two Incinerates, Hellkite, and the Rite of Flame. Nakano took one of the burn spells and left the Dragon. He also got the other one when he activated his Treetop Village and Chapin killed it. Chapin fell to 4 from the Masked Admirers, and Profane Command was enough to finish him off after one more attack.

The much-heralded Spinerock Knoll made its debut, and Nakano sighed as Patrick "impulsed" through the top four cards in his deck. Wren's Run Vanquisher hit the board on turn two and Patrick suspended Wheel of Fate. Nakano picked the card up to give it a sniff and handed it back to Patrick with a look of mild distaste. Before the match Patrick explained to me that he was considering bringing in the Wheels on the play to refuel his hands after fighting an early creature rush from Nakano.

The Wheel would never get to spin, though, as turn four saw another Knoll from Chapin, who also suspended a pair of Rift Bolts. Although Chapin fell to 13 on the next attack there was no doubt about the outcome of the game as he unsuspended the burn spells.

Patrick got a big hand from the U.S. crowd as he peek-a-booed a Dragonstorm for four that was hidden away under one of his lands.

Once again Patrick held onto the Lotus Bloom but this time he lost it to Thoughtseize. Nakano also saw two Shock, Hellkite, and Rite of Flame, but he took the artifact. Nakano began to mount his army with a pair of Llanowar Elves, Wren's Run Vanquisher, and Troll Ascetic. He only had two lands, though. Patrick had Shocked one Elf and could have Shocked the second one—effectively stranding the Troll for at least a couple more turns.

Patrick agonized about whether or not to send the turn but finally decided to Shock the other Elves against a mana-light Nakano, who still only had two lands. Patrick had led off with Knoll and played another while amassing counters on his Fungal Reaches. He was at 11 with less than two turns to live. Imperious Perfect did nothing to accelerate the clock, and Chapin was at 4. Could he win this turn? Maybe not but he could buy some time. He had just enough mana to hit a Dragonstorm for two, killing the two Elves and doing 5 to Nakano. 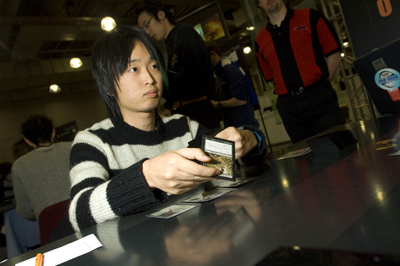 Nakano makes his play.Nakano killed both Dragons—one with Eyeblight's Ending and another with Slaughter Pact. Troll Ascetic took Chapin to 1.

"Shock you. Empty the Warrens for two."

Nakano paid for his Pact and started to attack with his Troll. He looked at his available mana—only one green—and the untapped Goblins and wavered. Then with a cock of the head he seemed to decide that would be an okay trade. Patrick agreed, and two Goblins took down the Troll.

Pat passed the turn with no play and Nakano took Bogardan Hellkite with Thoughtseize—seeing a Shock as well. Patrick had no out to the Treetop Village, and they were onto the game that would decide who advanced to the Semifinals.

Nakano's deck sputtered as he sent back two sets of openers in this game. He needed to find five cards that could beat the breakout deck from this weekend. The five he kept didn't look like they could do it from this angle, but when you are down to five you can't be too choosy. Patrick made the situation even direr for Nakano by playing the matchup-critical Spinerock Knoll on the first two turns and Shocking Boreal Druid.

Nakano had two lands to Patrick's four when he was finally able to play something else. His Wren's Run Vanquisher revealed Imperious Perfect. Troll followed a turn later instead of the elf lord when Nakano found a third land. Under no pressure, Patrick was able to stock his hand and build counters on his lands.

Nakano attacked and Patrick flashed out Hellkite, doing 3 to the Vanquisher and 2 to the player.

"I will block," grinned Patrick, who could not get his Dragon in the path of the Troll fast enough.

"Neh... neh... neh," said Nakano, as he wiped out the Hellkite with an Eyeblight's Ending and got through with his Troll. It didn't matter, as Patrick said the dreaded words...

"Here we go..." came an exultant voice from along the spectator's rail.

Rite of Flame powered out Bogardan Hellkite and the Knoll revealed another. Nakano went down to 2. He had three lands but if he was holding Eyeblight's Ending and Slaughter Pact there was still a chance that Patrick could lose. Patrick could have Knolled up Sulfurous Blast instead—killing the Troll—but opted for the double Dragon plan, putting his opponent to 2.

Nakano looked at the next card of his library before extending his hand in congratulations. 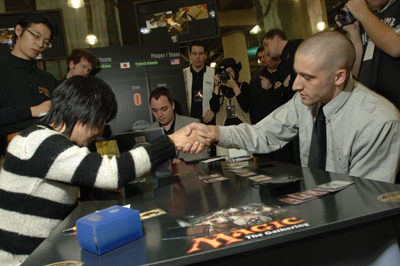 Patrick Chapin wins 3-2 and advances to the Semifinals, where he'll be up against Gabriel Nassif with a Dragonstorm Update mirror match.