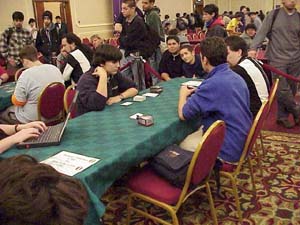 In the first round of the Top 8, two locals from Chile met each other. Rodrigo Sanchez, a member of Team Xoptimo.com, of which 4 members made the Top 8, was playing The Solution, while Jose Echeverria, one of the amateurs, was playing an aggressive Blue/Green splash Red deck.

Rodrigo won the coin toss, and elected to play first, however he had to mulligan his first hand. He sighed at his second hand, but decided to keep it anyways. Things did not go well for him, though, as after he played his Island, he missed his Turn 2 land drop. Meanwhile Jose played a Blurred Mongoose on Turn 2, and Rodrigo then drew a Stormscape Apprentice and played it. Jose decided to trade the Mongoose with the Apprentice, and then played a Kavu Titan. Rodrigo was still stuck on one land, and Jose didn't make matters any better by Icing Rodrigo's land on one turn, and then a few turns later playing a 2nd Kavu Titan, but this time with the kicker. After Rodrigo had discarded twice, he conceded.

For the second game, Rodrigo sideboarded out his Disrupts, Undermines, and a Desolation Angel in favor of Excludes, Gainsays, and a Rout. Jose boarded out his Prophetic Bolts and Mystic Snakes for Gainsays and Flametongue Kavus.

Rodrigo chose to play first for the second game, and this time neither player had to mulligan. Rodrigo played a Stormscape Apprentice on his 2nd turn, while Jose played a Gaea's Skyfolk on his second turn. Rodrigo spent his third turn playing a Dromar's Cavern and a Vindicate on the Skyfolk, while Jose seemed to be creature light with no 3rd turn creature play. Jose cast a Repulse on Rodrigo's Stormscape Apprentice during his end step, and Rodrigo elected not to replay it on his next turn. Jose took this opportunity to Prophetic Bolt Rodrigo, taking a Repulse. Rodrigo finally replayed that Stormscape Apprentice, only to have it Excluded.

Jose still didn't have any creature action going on, probably partly because he sided out his Mystic Snakes. Rodrigo decided to try to play a creature again, this time a Galina's Knight, but it was Repulsed during his end step. Rodrigo recast the Galina's Knight, but this time Jose didn't have any answer to it, instead finally drawing a Blurred Mongoose on his turn and playing it. Rodrigo, figuring that Jose was out of counter magic, went for the very devastating Spectral Lynx, and Jose could only barely mutter, "Okay." Jose used an Ice during Rodrigo's end step to tap the Lynx, no doubt in search of something, anything, from his deck, and find something he did. The Galina's Knight traded with the Blurred Mongoose, and then Jose cast a Kavu Titan with kicker. Rodrigo had the Exclude, but Jose had just drawn the Gainsay. He was back in business.

Or was he. Rodrigo had a Vindicate for the Titan, and all that Jose's deck gave him was more land. He cast a Flametongue Kavu in order to keep the Lynx from eating away at his life total, but Rodrigo had an Undermine. Jose drew and played a Blurred Mongoose, and the Lynx and Mongoose began to exchange hits, with Rodrigo leading the race by a long shot. However, all of these lands that Jose had been drawing may actually have been starting to do him some good, as he was able to Urza's Rage with kicker Rodrigo, still holding another in his hand. Jose was only at 2, however, and when Rodrigo gained 5 life in response to the Rage with a Dromar's Charm, Rodrigo dealt the final 2 points of damage with his Spectral Lynx. 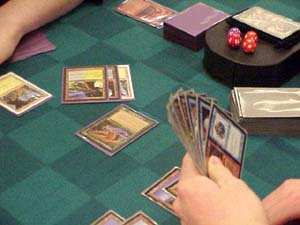 For the last game, Jose realized the error of his ways in siding in the Flametongue Kavus, and sided them back out in favor of Mystic Snakes.

Jose elected to play first for the last game, and neither player had to mulligan. Jose played a Turn 2 Gaea's Skyfolk, while Rodrigo played a Turn 2 Galina's Knight. Jose followed his Skyfolk up with a Blurred Mongoose, and Rodrigo only played a Salt Marsh on his 3rd turn, leaving his Galina's Knight back to block the Mongoose. Jose only continued to swing with the Skyfolk, though, but it eventually died to a Dromar's Charm. The 'Goose and the Knight continued to stare at each other, however, until in response to a Vindicate on his Shivan Oasis, Jose Repulsed the Knight. Rodrigo Vindicated a Yavimaya Coast on the next turn, and Jose has no other lands besides 2 Islands despite having cycled a few Ices and cast the Repulse. Rodrigo is also a bit mana hosed, however, with only 2 Salt Marshes and a Plains, but this still allows him to cast a Spectral Lynx without any fear, and that pretty much puts an end to the Mongoose beatings.

Rodrigo played his 3rd Vindicate of the game on a Gaea's Skyfolk, but Jose merely drew and played his 3rd Skyfolk. Both players were still land stalled on 3, but Jose was far ahead on life, and Rodrigo was now having to discard. The Skyfolk brought Rodrigo to 4, and Jose had to discard a Gainsay, which must've made Rodrigo feel pretty bad about his chances to win. Sure enough, one turn later, the game was over.

Final Result: Jose Echeveria wins 2-1 and advances to the Semifinals, where he will play against Matias Gabrenja.