Quarterfinals: Rough and Tumble in the Top 8

hingo Kurihara is another of the growing cabal of great Japanese Magic players on the Pro Tour today. He lives in Tokyo and tests with Katsuhiro Mori, Takuya Osawa, and Kenji Tsumura, each of whom acknowledges him as having potential to be the next big thing in Magic. Osawa himself broke out in Prague last season and is back in the Top 8 again, but he will have something of a bunfight for the top slot with both Kenji and Shingo hungry for a Pro Tour win. Ervin Tormos of Cincinnati, Ohio, is a student and one of two American players with huge amounts of support from the crowd today. The U.S.A. chases a Pro Tour win today in the face of a world that has never been better at the game. 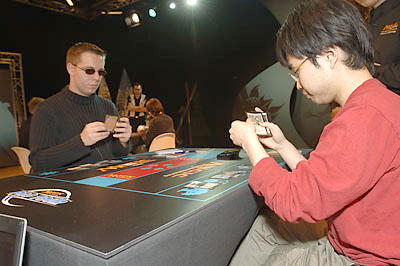 Ervin Tormos, one of two Americans in the Top 8, battles Shingo Kurihara, an up-and-comer in Japanese Magic.

Each player had a Plains and an Island to start, but while Ervin had an Amrou Scout on the play, Shingo had eschewed rebels in his blue-white deck for Slivers, and played their newest recruit, Sinew Sliver. Initial hits were traded, but neither player had a turn-three or -four creature. This seemed in Tormos's favour, as he got to search for Amrou Seekers at the end of Shingo's turn.

The Seekers immediately swung in, only to be blocked by Sinew Sliver. With damage on the stack, Shingo used Whitemane Lion to save his two-drop, making the trade one-sided. In this blue-white mirror, there would likely be a number of cards that were of limited use, and the Amrou Seekers effectively counted as Gray Ogres that could be searched for. Nonetheless, another copy did get fetched by Amrou Scout and swung in.

Ervin seemed very aggressive with his attacks, running in again and this time losing his Rebel to Snapback on Whitemane Lion, which set up for awkward attacks in the future. Another Amrou Scout was the play for Tormos, who had Errant Doomsayers to fetch at the end of turn too. With the Doomsayers out, Shingo was suddenly in danger of taking damage, and he dropped to 16 as one of the Scouts attacked after his Sliver got tapped.

Errant Doomsayers got hit by a Temporal Eddy from Kurihara, only to get searched back into play at the end of turn. This allowed for another 2 points of damage to be snuck through. Shingo played a Cloudchaser Kestrel for his turn and passed.

There was a Flickering Spririt for Tormos, who elected not to attack. Shingo then took the opportunity to use Whitemane Lion (after an Errant Doomsayers activation had tapped Cloudchaser Kestrel) to get three untapped white creatures in play at the same time - allowing Gaze of Justice to remove the Doomsayers from the game.

The subsequent hit that Kurihara took from having no untapped men took him to 8, and a freshly fetched Aven Riftwatcher which joined Flickering Spirit brought Shingo's life to 4.

Kurihara played a morph and passed. When Ervin swung, Shaper Parasite forced Flickering Spirit to flicker, buying Shingo one more turn. On just 2, though, he needed something good. Shaper Parasite swung in and then Thunder Totem came out for Shingo, who passed. The flyer plan was going to need a new Rebel recruit, as Aven Riftwatcher vanished, and suddenly Flickering Spirit would not be good enough. When Tormos didn't search again, it seemed to signal that there were no further Rebels forthcoming, though. Could the tide be turning?

Tormos attacked, and when Thunder Totem got turned into a creature, it was hit with Temporal Isolation before blockers. This forced Cloudchaser Kestrel to block, and Tormos had the Dawn Charm to regenerate his creature.

Kurihara attacked Tormos down to 16, played Amrou Seekers, and passed. His totem was active again as Kurihara passed which was enough to hold off Ervin briefy, though a fresh Castle Raptors for him did threaten the kill again.

Shingo had a Temporal Isolation for the Birds, and indeed some Raptors of his own, and continued to plink in with Shaper Parasite, whose Magic toughness of 3 was enough to make life difficult for Ervin. A Sunlance finally dealt with it, and Tormos played a Gossamer Phantasm, still looking for those last 2 points of damage.

Shingo played a Synchronous Sliver and passed. A 4/4 monster looked pretty good for the Japanese player, and it was joined the following turn by an Amrou Scout.

At end of turn, Crookclaw Transmuter was the play for Ervin, who now had enough flyers to finish things off, just before the Japanese side of the board got really dangerous.

There was quite a lot of potential for sideboarding on both sides, as in this colour mirror, various cards drop in value quite considerably. Tormos, though, chose to just switch a single card - a Sunlance coming out for a Gaze of Justice. Kurihara had a slightly more radical sideboard plan, bringing in a Rough // Tumble that he had picked up early in pack three, which had the potential to be a wrecking ball if the games went similarly after boarding.

As the players shuffled each other's decks, Ervin pointed out an interesting thing about Kurihara's hometown of Tokyo, Japan - it is the only national capital whose English name is an anagram of another city within the country (Kyoto). Stay tuned for more fascinating facts from Tormos. 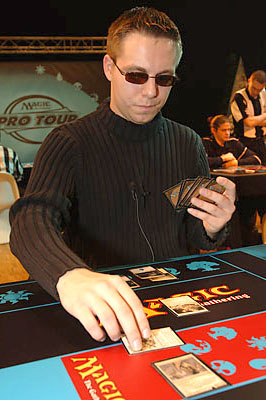 The first play of Game 2 was Benalish Cavalry from Ervin, who followed up with a morph. Kurihara had his Rough // Tumble early, though, and took both down with the new Pyroclasm before playing a Looter il-Kor. He then had a Sinew Sliver to follow, while Tormos was on the back foot a little, looking to stabilise (albeit briefly) with an Aven Riftwatcher.

Shingo was not about to let up the pressure, though. He had a morph before passing. This morph was shown to be a Shaper Parasite the very next turn, killing an Amrou Scout before it could go searching. At this point, Ervin played his white bomb, which was only slightly bombastic in this matchup - Crovax, Hero Ascendant. It killed the Looter and allowed for an extra point of attacking, but Tormos was still on the back foot, as some 4/6 Castle Raptors came out for Shingo. When a Watcher Sliver followed, it became clear that it was the Japanese player who was getting the most out of the American's legend.

He hit for four in the air with his Raptors for a few turns while stalling the ground. The bulk of Ervin's board was land, and he said go once more, only to have his one creature hit by Temporal Isolation. In something of a desperation play, he used Erratic Mutation on Castle Raptors and bounced Crovax when he came up one point short. Dawn Charm then fogged the turn.

After combat a Synchronous Sliver came to play, and again Tormos was in a situation where he had everything to do not to lose. When Shingo played another Sinew Sliver, Ervin scooped it up.

For Game 3, Tormos had a mulligan and got stuck on two Plains as the game began. He had a Sunlance for Kurihara's Looter il-Kor but was powerless to do much about the Thunder Totem, Sinew Sliver, or Saltfield Recluse that followed shortly thereafter.

While he did gradually draw out of his lack of lands, they remained all Plains, which made it seem likely that his morph would be stranded face down for the time being. Another Sinew Sliver joined Kurihara's team, and while it did get hit by Temporal Isolation, it effectively still hit for one a turn, thanks to the bonus it afforded. Castle Raptors came next, in what seemed to have the potential to be a blowout game. A Dawn Charm stopped things for a turn, but without the mana he needed, Tormos couldn't fight Shingo's lightning start.

With each game, minor sideboarding changes occurred, along with big sides in and out such that neither player could get a read on how much his opponent's deck had changed game to game. 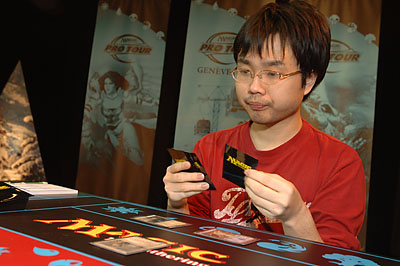 Again Tormos had a mulligan on the play, rolling his eyes both at the quality of his opening sevens and at the match-up. Before Shingo had arrived for the match, he had said his deck should have a very good match-up against a lot of red decks. The same could not really be said of this pseudo-mirror. He then had to go down to just 5.

With both lands, and a spell in the form of Gossamer Phantasm, things looked like they could be okay. His flyer got hit by a Snapback, which was enough to kill it, but Ervin had a backup plan with Crookclaw Transmuter at the end of Kurihara's turn four. He followed up with Amrou Seekers and Castle Raptors, while Shingo had a Raptors of his own. Unfortunately for Tormos, Shingo also had a Temporal Isolation for his opponent's Raptors, slowing down his start. A Gaze of Justice from Ervin was effectively nullified by Whitemane Lion, and then Kurihara dropped his bomb - Tumble to virtually clear Tormos' board.

It only took a couple more swings to finish it. Shingo Kurihara won the game and the match, to advance to the semi-finals.