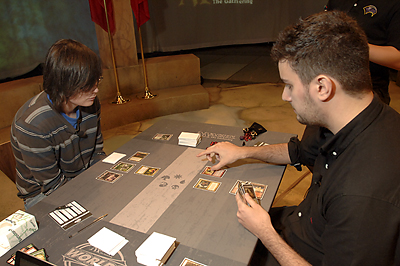 Marijn Lybaert has an impressive resume for such a young player, and André Coimbra is no slouch either.Marijn Lybaert sat down to his Quarterfinals match with one overriding goal: escape the Quarterfinals. His best performance to date has been 5th and 6th place finishes at 2008’s PT–Hollywood and 2007’s PT–Geneva, respectively. His opponent, André Coimbra, also had a previous Quarterfinals finish at Worlds 2005. The Portuguese competitor also has five Grand Prix Top 8s. Lybaert is playing a fairly standard Jund Blightning / Bloodbraid / Broodmate list, and is matched against Coimbra’s red-green-white “Naya Lightsaber” deck sporting 5-power fatties Woolly Thoctar and Baneslayer Angel.

“So, how’s the match-up?” Lybaert asked.

“I don’t know, you tell me,” Coimbra replied coyly, referring to the playtesting Lybaert and his partners must have done last night.

“Heh, you’ve played it!” Lybaert joked, and with the sea of Jund seeing Standard play here at Worlds, he was right—Coimbra fought through a gauntlet of the popular black-red-green deck and was prepared to fight it again today on the Sunday stage.

Lybaert led with a Savage Lands to Coimbra’s Oran-Rief, the Vastwood, but with only a Mountain for turn two, there would be no savage early Leech beats. Coimbra was the one with the beats—he laid a turn-two Noble Hierarch and grew it to 1/2 with the Vastwood.

Sprouting Thrinax hit on turn three off of untapped Rootbound Crag, and Lybaert passed it back. Coimbra laid a third land and cast Ranger of Eos off of those lands and the Hierarch. He fetched a Wild Nacatl and a Scute Mob.

Lybaert untapped and threw down a Bloodbraid Elf. It cascaded past a second Bloodbraid, a Bituminous Blast, two land, Garruk Wildspeaker, Broodmate Dragon, and another land before finally hitting a Lightning Bolt. The Bolt zapped the Hierarch. The hasty Elf joined the Thrinax in the red zone, and André accepted the damages, going to 14. His return swing with his own 3/2 Ranger brought Marijn to 17. André finished up strong with his two fetched one-drops and put a counter on each with Oran-Rief.

Lybaert had his own impressive turn: Garruk Wildspeaker ticked up to 4 and threatened Overrun, and the extra mana produced gave the Belgian a Putrid Leech. In the face of Coimbra’s Scute and Nacatl, he ended his turn without attacking.

Coimbra laid his fifth land and thought. Rather than cast spells now, he opted to wait. He eyed his Path to Exile and Marijn’s creatures carefully.

Marijn untapped and sent a Bituminous Blast at the Scute Mob before it could go large, and cascaded into a Maelstrom Pulse on Wild Nacatl, removing both of Ranger’s buddies in one fell swoop. He attacked with only his Sprouting Thrinax, and the expected Path to Exile meant he replaced it with a tapped Mountain rather than three Saprolings. Lybaert made a Beast, bringing Garruk down to Lightning Bolt range—and Bolt the Planeswalker is exactly what Coimbra did.

The Portuguese player laid a 6/5 Woolly Thoctar and passed, right into the Belgian’s Blightning clearing his hand of all lands and dropping his life total to 11.

Lybaert used Maelstrom Pulse to take care of the Thoctar, and his subsequent attack brought Coimbra down to 4 despite a Ranger-Beast token trade. Coimbra’s now empty board paled in comparison to Lybaert’s creatures and hand, so he packed it up. 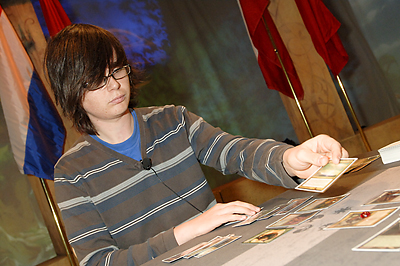 Lybaert checks his pulse.Coimbra kept, but Lybaert sent his seven back for a more acceptable six. Coimbra played an Arid Mesa, and it was matched by Lybaert’s Verdant Catacombs. The Portuguese player went down to 19 and fetched a Mountain, but his follow-up Forest didn’t allow him to cast anything yet.

Lybaert tied it up 19 all, fetching a Forest and then going Swamp, Putrid Leech. Unless Coimbra committed creatures to the board soon, the Leech looked to dominate it.

Coimbra was unafraid however, and showed his colors with the third basic land in the red-green-white triple. He then laid a Woolly Thoctar, which could tangle respectfully with the Leech. All Lybaert had on his turn was a Savage Lands, which was unfortunate in light of Coimbra’s kicked Goblin Ruinblaster sending it to the bin. The Ruinblaster and the Thoctor rumbled in, and after a pump, the Leech traded with the 5/4. This brought Lybaert down to 15.

Attempting to staunch the bleeding, Lybaert laid a third land and a Sprouting Thrinax. Coimbra had a Celestial Purge to deal with the Thrinax without any residual Saprolings, and attacked Lybaert down to 13 with the Ruinblaster. Great Sable Stag appeared on the Portuguese side.

Lybaert’s third land let him unleash Blightning to take out Coimbra’s hand of Ajani Vengeant and land. Facing the Stag and the Ruinblaster, however, Lybaert looked in trouble. He missed on a fourth land and had to pass it back.

Unfortunately, Lybaert’s third land was a Rootbound Crag, and Coimbra found the second Goblin Ruinblaster off the top to take care of the nonbasic. The entire team chomped on Lybaert’s exposed life total, and on only two lands facing an army, the Belgian opted to move on to Game 3.

A tapped Sunpetal Grove from Coimbra meant that Lybaert poured on the pressure turn two with Putrid Leech—but he went down to 18 off of fetches to do it. Coimbra revealed his stumbling start with a turn-two Noble Hierarch.

Lybaert attacked with the Leech but opted not to pump, taking it to 18 all. He laid a tapped Savage Lands and passed. Coimbra once again had the devastating kicked Goblin Ruinblaster, and with exalted it brought Lybaert down to 15. The Belgian replaced his departed triple land with a dual—Rootbound Crag—and passed with the Leech on defense.

Coimbra again had a second copy of the Ruinblaster, taking Lybaert back down to two lands, but the two 2/1s could not attack profitably through the Leech.

Baneslayer Angel did not have that problem, however.

The parade of huge monsters continued with a Woolly Thoctar. Stuck on two and unable to find more lands, Lybaert decided not to stick around for the parade’s big finish. 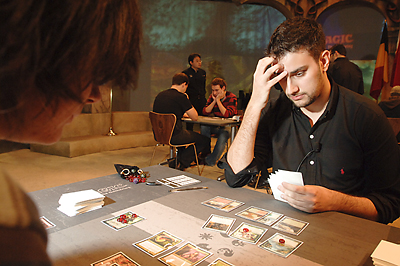 Coimbra thinks, thinks, thinks.Coimbra was first on the board with a Noble Hierarch, but it was out for blood, swinging Lybaert down to 19.

Lybaert went to 17 from fetch lands and completed his trifecta of basics but had no turn-three play. Coimbra fetched a Mountain to go down to 19, and again bashed with the Noble Hierarch, taking it to 19-16 in his favor.

On his turn four, having fetched another Mountain to go to 18-16, he nearly kicked a Goblin Ruinblaster. He paused for a moment, holding it in his hand. The only two nonbasics on the board were Lybaert’s third Verdant Catacombs and his own Sunpetal Grove. Realizing Lybaert could just sacrifice his Catacombs in response, Coimbra opted to pass without any spells, saving the Ruinblaster to do further damage later.

A fourth Verdant Catacombs later, at six mana, Lybaert cast a Broodmate Dragon. Coimbra had two Celestial Purges for the two halves of the Dragon, however, and Bolted Lybaert down to a mere 9 on his end step. When Bloodbraid Elf arrived, cascading into Great Sable Stag, and attacked in an exalted manner to take Lybaert down to 5, the writing was on the wall.

“Show me the Bolt, and I’ll concede,” Lybaert told Coimbra, and when Coimbra revealed a second copy of the burn spell, Lybaert was true to his word.

André Coimbra defeats Marijn Lybaert 3–1 and advances to the Semifinals!