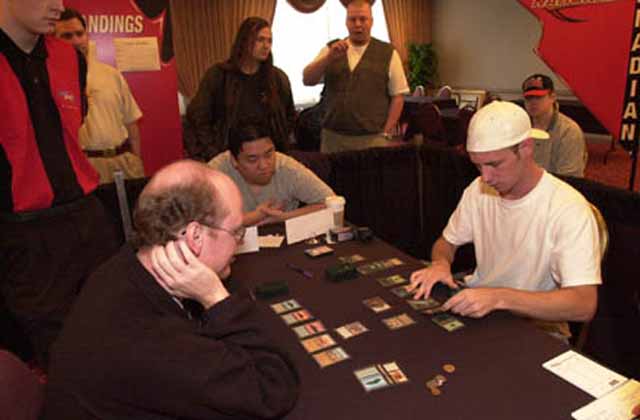 This Quarterfinal matchup pitted two of B.C.'s finest in Ryan Fuller and Michael Gurney. Fuller, who has had a great deal of Pro Tour success, was making a return to the Magic scene after a six-month hiatus. Gurney also recently returned back to the Magic scene after leaving the game in frustration. The deck match-up looked favorable for Fuller as he was playing Stompy against Accelerated Blue.

Gurney won the crucial die roll and went first. Fuller took a mulligan to six giving Gurney a window of opportunity. Gurney started with an island, then Fuller played a forest and an Elvish Lyrist. Gurney replied with a Powder Keg on his second turn to slow down Ryan's offense. Ryan came back with a River Boa, which posed a major threat to Gurney. Gurney puts a counter on his Keg and played a Grim Monolith. Fuller continued his assault on Gurney with his two creatures and laid a Treetop Village to add to his array of different converted-mana-cost creatures. Gurney kept the Keg at 1 and played a second Keg and a Port to slow down the Village. Fuller attempted to add another Boa to the fray but a Counterspell by Gurney prevented this from happening. The combination of the Port and the two Kegs permitted Gurney to clear away Ryan's offense and create a stalemate . The stalemate was soon broken when Gurney played a Rath's Edge and played a Masticore. Fuller tried to prevent Masticore from totally decimating him by playing Tangle Wire and a Pouncing Jaguar. The Masticore was held at bay for a couple of turns with Gurney low on life. Fuller was able to sneak through a Vine Dryad when Gurney killed the Jaguar. Fuller then quickly Rancored the Dryad to prevent Masticore from coming over. A Treachery by Gurney on the Vine Dryad quickly ended that and the game ended a few turns later.

Fuller mulliganed for the second time this match and starts with Wild Dogs. Gurney played a Port on his first turn, fearing the 4 Rushwood Legates in Fuller's sideboard. Fuller followed up the Dogs with a Jaguar to keep the pressure on. Gurney dropped an island and said go. He was not looking in good shape. Fuller sent his forces over and played a Legate. Gurney cast Hibernation to slow down the beats and a Keg a few turns later. Gurney was unable to draw any sort of offense and soon succumbed to the green mass. 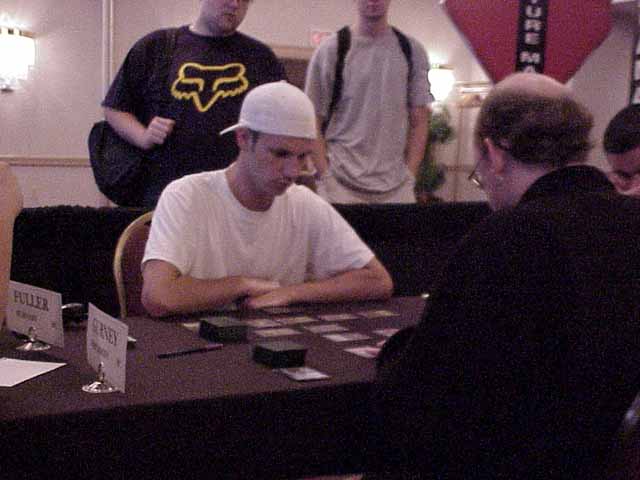 Fuller started off this game with yet another mulligan. Fuller seemed rather upset about this as he had mulliganed all three games. Fuller started out fast once again with forest, Wild Dogs. Gurney played a Keg and Fuller played added another creature to his force. Gurney was forced to Keg away the Dog and Treachery a Pouncing Jaguar to slow down Fuller's attack. Gurney opted not to cast a Morphling on the next turn opting to keep mana available to bluff a counterspell. A couple more Dogs joined Ryan's side and Gurney decided to use Stroke of Genius to get three cards. A Keg and the Morphling came down a few turns later. Fuller was able to get Gurney down to 1 but Morphling was able to do what he does best and held off a Rancored Dogs while attacking for 5.

Fuller threw his hand down in disgust as he has to take another mulligan. His new hand was quite good and he lead with Wild Dogs, followed by a Boa. A Rancor hit the Boa on turn 3 and Gurney was falling quite a bit behind in the race. The Dogs and the Boa brought Gurney down to 6. Gurney was forced to use Hibernate and his Port to try and hold off Fuller's offense. Fuller meanwhile was still stuck at two land. Fuller dropped a Lyrist with the 1 mana he had available in his main phase and said go. Gurney laid a second Port, depriving Fuller of mana. Fuller drew a land and was able to Rancor up the Lyrist, bringing Gurney down to 3. Gurney played a Rath's Edge and killed the Lyrist. Fuller dropped a Jaguar and the Rancor and we were off to the fifth game. 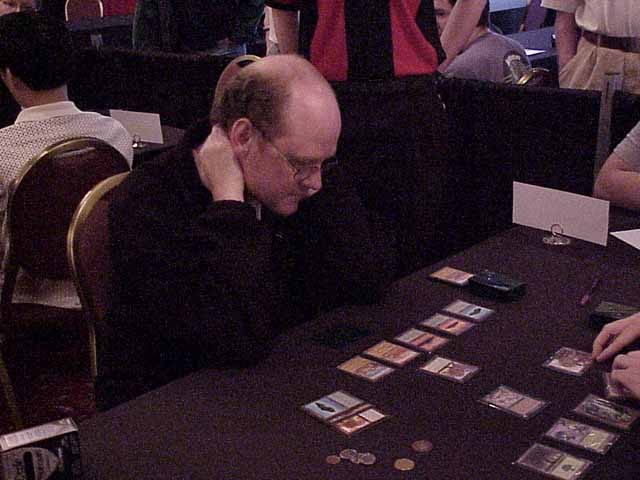 Fuller was finally able to start with 7 cards in hand and one of the best hands he has had all event. It included two forests, Elvish Lyrist, Gaea's Cradle, two Rushwood Legate and Tangle Wire. Gurney started off with a Faerie Conclave, then a Port and a Keg. Fuller meanwhile had drawn another Legate and an Uktabi Orangutan. Gurney laid an Island and said go. Fuller then drew a Boa and attempted to play it, but Gurney had a Counterspell. Fuller then went off, dropping all 3 Legates and a Tangle Wire. Gurney put a second counter on his Keg and tapped all of his lands for the Tangle Wire. Gurney didn't have a fourth land and was forced to say go. Fuller then drops the monkey on the Keg, played a Village and attacked for 7. Gurney played Hibernation during his upkeep to survive a little longer. Fuller Rancored up the Village served then replayed his 3 Legates. Gurney dropped a Keg, but is about to lose when Fuller decided to try and play Rancor on the Village. Gurney used the Keg to stop that plan. Fuller's bad play did not cost him the match though as his Legates were just too much for Gurney.

Ryan Fuller will play Terry Lau in the semifinals. Gurney could still make the Canadian national team if he manages to make it through the losers' bracket.