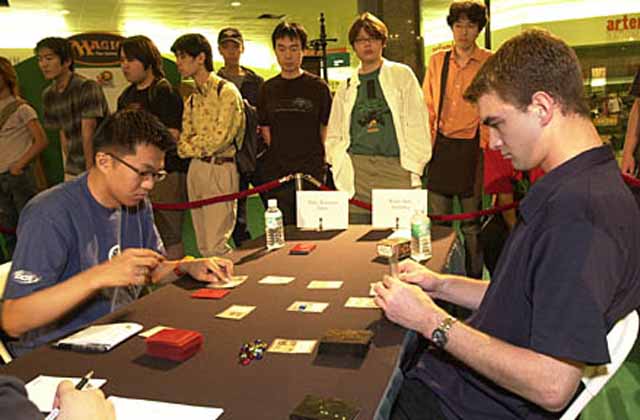 Before this matchup began, 3rd place Sam Ward of Australia was expressing concern about the amount of hate in the other finalists' sideboards for his Replenish deck, including that of his opponent's, 6th place Koichiro Maki of Japan. Maki, meanwhile, knew that his only chance was to draw his anti-Replenish cards while applying constant pressure with his Rebels. Both players began the matchup by joking about how much they didn't want to play each other.

The first game, Maki started off fast, playing a Fresh Volunteers followed by a Crusade. Sam meanwhile played at his own pace, playing Lilting Refrain and a Seal of Cleansing to destroy Maki's Crusades. However, Maki kept the pressure up, playing 2 Crusades the next turn. Sam missed a land drop, playing another Seal of Cleansing to destroy one of the Crusades. Maki played what he called a "4-casting cost Disenchant"-Armageddon, which was countered by Sam using the Lilting Refrain. Seeking to slow down Maki's offensive, Sam tapped out on his turn to play a Parallax Wave. Seizing his opportunity, Maki played an Armageddon the following turn, following with a Plains and a Ramosian Sergeant. Sam removed the Sergeant from the game using his Parallax Wave, but was only able to play an Adarkar Wastes. As the last counter faded away from his Parallax Wave, Sam conceded. 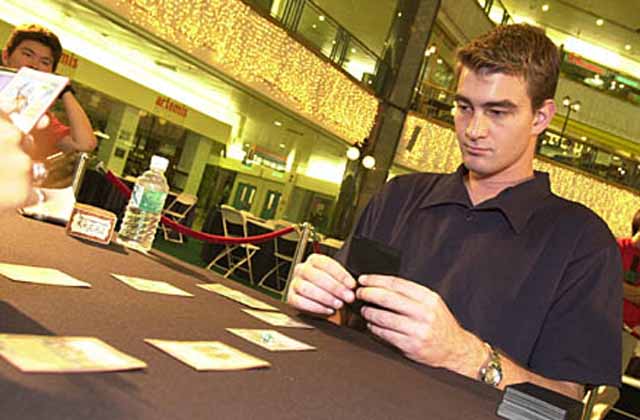 The second game was over very quickly, as Sam's deck went off like clockwork with a 4th turn Replenish. The third game was a different story, as both players played methodically, not wanting to give up a game and the lead to his opponent. Maki came out of the gate quickly with multiple Mothers of Runes, Ramosian Sergeant, Steadfast Guard and Crusades. Sam was scrambling to get his combo together using Attunement, but wasn't able to find it and was forced to hard cast a Parallax Wave and an Opalescence. Maki was able to fish a counter from Sam with a Fresh Volunteers, allowing him to play another Crusades. The next turn, Sam attacked with an Attunement and two 6/6 Waves (thanks to Maki's Crusades), Maki spent several minutes thinking about how to block, looking through Sam's graveyard, checking which of his creatures had been removed from the game, and counting Sam's lands and cards in hand, trying to think of all possible plays and figuring out the optimum way to block. In the end, he chumped with the Guard, letting the Attunement and one Wave through. Sam removed his counterless Wave from the game with the other Wave and played a Parallax Tide. Sam may have become the first player to be damaged by a Sheltering Prayers when Maki attacked the next turn with his Crusades and the Prayers. However, he wasn't able to stop Sam from removing all his lands and creatures from the game the next turn and went under from an assault by various enchantments. In response to Sam's question asking where all of Maki's anti-enchantment cards were, Maki jokingly replied that they must have all turned into Crusades. 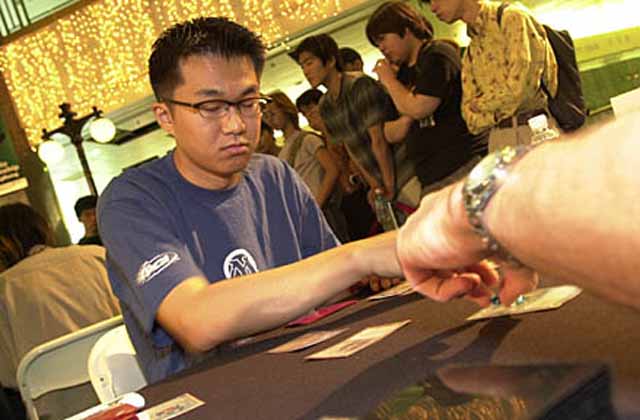 The fourth game saw a 4th turn Armageddon from Maki, leaving him with a Mother of Runes and a Crusade in play, while Sam had only a Marble Diamond. However, Maki didn't try any land, and Sam was able to recover to recover faster, playing an Attunement and drawing into his combo, hard casting a Wave to remove Maki's creature from the game, buying him time to set up Opalescence and another Attunement. Meanwhile, Maki is sitting on a hand filled with Erases, Disenchants, and creatures like Ramosian Sergeant, still unable to draw land. When Sam attacked for the kill, Maki turned to the judge and asked why he had been unable to draw a single Plains and win. With both the audience and his opponent laughing, Maki offered his hand to Sam, signaling the end of the game and the Quarterfinals. Sam Ward won 3-1, going on to play defending APAC Champion Masaya Mori in the Semifinals.