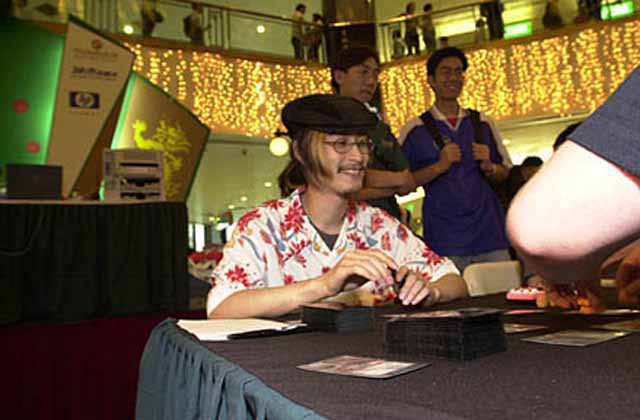 Satoshi would have to be considered the favorite in this matchup. Playing out of Tokyo Japan, he is one of that countries top players and was trying to become the first player to ever repeat as Continental Champion (He won the '98 APAC). Nakamura was playing a Blue/White Squirrel Prison deck.

Tanaka is from Japan's "other" Magic city, Osaka, and is part of Team Muneo. The rivalry between Osaka and Tokyo is huge, not unlike American baseball's Yankees vs Red Sox. Tanaka was playing a mono black Mercenary deck. Certainly it was the "rogue" deck of the tournament.

A bad omen for Satoshi, as he is forced to Mulligan his opening hand. What's worse, Tanaka opens up with a turn 1 Duress. However, things shift in Nakamura's favor as Tanaka gets stuck at 2 land, and Nakamura, helped by a Yavamaya Granger, romps merrily to 4 land and drops a Masticore. Tanaka, up against the ropes, top decks a snuff out, but his smile soon fades as Nakamura drops another Masticore. Tanaka top decks a Tutor, and fetches another Snuff out, but concedes when Nakamura uses Treachery to steal his only creature

The Magic Gods must have been upset with Nakamura as he is forced to double mulligan, and then refuses to mulligan a no land 5 card hand. He sees no land for the next 5 turns and concedes. 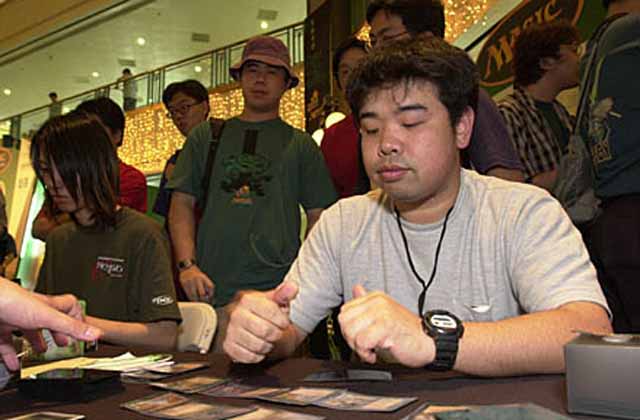 Finally, Nakamura has a strong opening hand that he doesn't need to Mulligan, playing a 1st turn elf. However, Tanaka also opens strong with a turn 1 Duress (grabbing a miscalculate), followed by a turn 2 Flesh Reaver. The Flesh Reaver beats both players down a bit, until Nakamura plays a Blastoderm. However, Tanaka is prepared and plays the ultimate hoser card, Perish, followed by a couple more mercenaries. Nakamura uses Treachery to grab a Merc but fails to draw any more creatures for the rest of the game as Tanaka rolls to the win.

Nakamura starts out Game 4 quickly with a turn 1 elf followed by a turn 2 river boa. Tanaka has a poor start as his turn 1 Duress fails to find any non creature cards and his only creature is a Flesh Rever that just has to stand by and watch the Boa work. The Boa beats Tanaka down for a while (20-15) until Tanaka tutors for a Perish. Tanaka drops a couple of Mercs and then cleverly uses Dark Sacrifice to thwart Nakamura's Treachery. Nakamura draws a Masticore, but holds back from playing it. Is he afraid Tanaka has an answer for it? A few turns later Nakamura plays a River Boa, and his patience is rewarded as Tanaka casts Vendetta, getting rid of the Boa. Tanaka swings and misses with another Duress while Nakamura calmly plays the Masticore and happily trades a Treetop Village for Tanaka's Flesh Reaver. Nakamura finishes off Tanaka a few turns later as Flesh Reavers just aren't very good blockers, and Blastoderms laugh at Snuff Outs and Vendettas

Nakamura has a tough choice as his opening hand has 2 Islands but no other land, his other cards were a Llanowar, an Elder, a Miscalculate, and 2 Masticores. He decided to keep and was rewarded with a turn 2 Forest. Meanwhile Tanaka wasted no time in playing a turn 2 Cateran Persuader and recruiting out a Harpy on turn 3 while ritualing in an Intimidator. He starting beating Nakamura down and a plan was brewing in his head. Nakamura felt pretty good about his chances, on turn 3 he casts his Elder (perhaps he should have played the Masticore?) and on turn 4 he drops a Blastoderm (again, perhaps the Masticore was the right play). At any rate, Tanaka is merrily attempts to snuff out the Masticore, but Nakamura now has enough mana to Miscalculate the Snuff Out. Interestingly, this is exactly what Tanaka wanted to happen as he recruits a 2nd Harpy, uses a ritual to pay for the Harpy's upkeep, and then plays Dark Triumph for the win. Nakamura, who tapped out to Miscalculate the Snuff Out, can only shake Tanaka's hand and wish him well in the Semifinals.