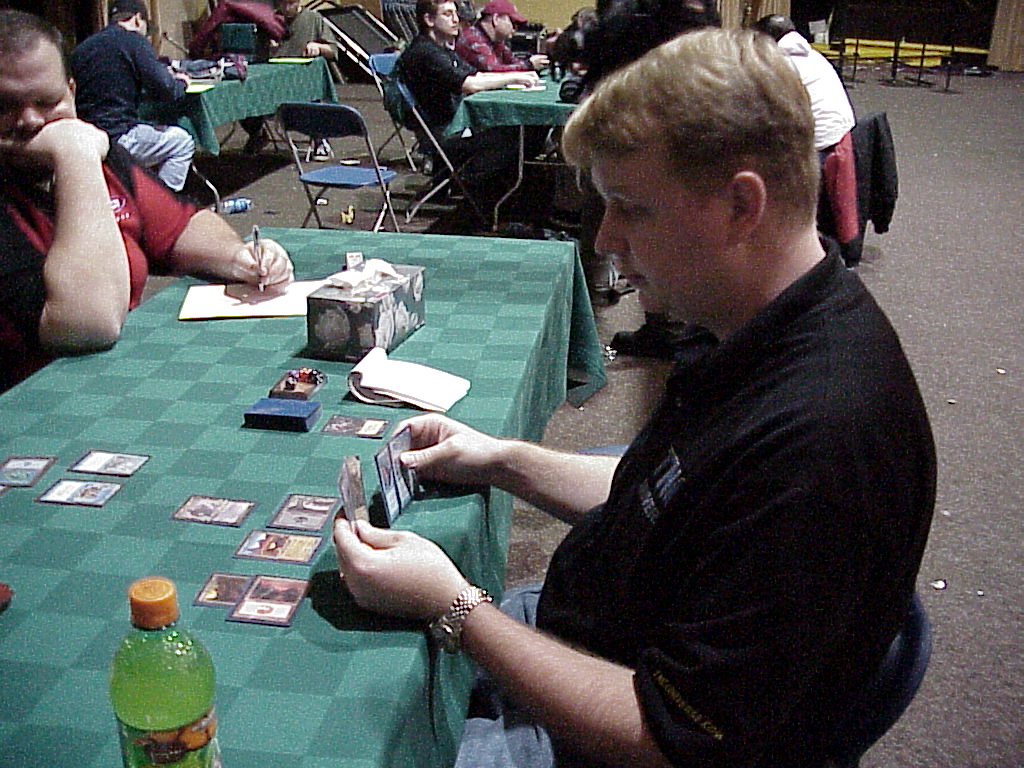 Scott has seen many a Top 8, even having a Pro Tour victory under his belt, while in contrast Brian sat opposite, making his first Top 8 appearance. Scott started the game with friendly banter and continued throughout, helping Brian ease into the role and I suspect this also helping Scott a little.

The game started with Brian making a series of bears after a Thunderscape Apprentice on turn one. This quickly reduced Scott's life total as he was unable to produce an effective blocker to contain the aggressors. Hunting Drake earned Scott a card and slowed Brian's assault. This received a Scorching Lava and the bears pressed on. Scott's next play was a Plague Spitter, which gave him another card over Brian, but it was uncertain at that point whether this was to be relevant. The Apprentice made 2/2's trade for Scott's 3/3's but Brian was starting to slow up on his creature deployment. After the dust settled from the creature exchanges, Brian was left holding his Apprentice with Scott on 4 life, unable to block due to creature drawbacks. The Apprentice was still looking to lead Brian into a victory as another bear was added. Now Scott needed another good card, his prayers were answered as an Urborg Emissary stalled Brian's potential attack and furthered Scott's offense. Brian drew another land then and Scott took his "Rocky" style recovery to victory.

Brain started again, making identical early plays. Turn one Thunderscape Apprentice followed by turn two Nomadic Elf then Yavimayan Barbarian. Again Scott saw his Urborg Drake and again it could not block against the Thunderscape's growth ability. This game, Brian was stuck on three land and Scott capitalized on this, making his Hunting Drake targeting the Pincer Spider. There is no reprieve for Brian just yet, needing the 4th land to cast the many four mana plays in his hand. Scott began to stabilize again, casting Scavenged Weaponry on his Lava Zombie, but this was blown away by a growth spell. That last attack put Scott to five life and Brian on twelve. Scott played an Urborg Emissary at that point, making him the aggressor, pushing Brian down to eight. A Backlash then removes the Spider blocker, so Scott cruised in with his flyers dropping Brian to two life. A Tribal Flames then took out one flier, stalling the game. A kickered Serpent then made an effective wall for Scott until it got Agonizing Demise with Kicker for the game.

For the last duel, Scott got opportunity to play first, so the early "Bear Go" rush strategy from Brian was less effective. So it turned very quickly into a game where large creatures ruled. This draw found Scott playing and gating back a Crypt Angel, making a mockery of Brian's creature exchanges. Scott then drew a Cavern Harpy making a creature recursion combo with the Angel protected by a Tidal Visionary. With this, Brian could not win and so began to fold into his hands as aspirations of his first GP victory slipped from them.