Your first Pro Tour Top 8 is something of a big deal. Not too many people get to have one, and you have a shot at something so much more. It's easy to get wrapped up in the stress of the moment, especially if, like Stephen Mann, you're a relative newcomer to the Pro Tour. It has to be just that little bit more nerve-wracking when you're forced to sit across from a Pro Tour Champion.

Ben Stark has long been considered one of the finest modern minds when it comes to Limited, and at Pro Tour Paris in 2011 he finally added a Pro Tour title to his resume. Though his deck this weekend is less powerful than the Caw-Go deck he played in Paris, it is still a blue-white-based control deck. It looks to take control of the game off the raw advantage of Sphinx's Revelation and a suite of answers. Mann, on the other hand, is playing Jund. His deck relies on big monsters and powerful spells to defeat his opponents. 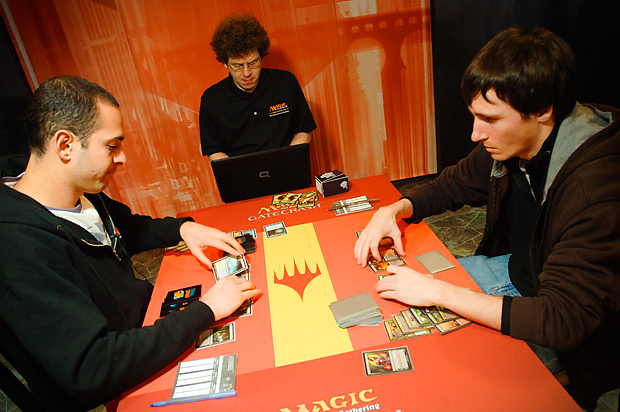 Stephan Mann is kicking off his first Sunday showing at a Pro Tour against Pro Tour Paris 2011 winner Ben Stark in the Quarterfinals.

Before the match began, neither betrayed any nerves, and they chatted as they shuffled. Once the cameras were rolling and they got the go-ahead to begin, both snapped into focus.

Stark was on the play to start, and though he had had to mulligan to six, the fact that Mann had no early Farseek meant a slightly easier road ahead. He cast Think Twice and flashed it back while Mann played out his third land, then dropped Augur of Bolas and was rewarded with Sphinx's Revelation. The only thing he was missing was white mana. Mann got rid of the Augur with Abrupt Decay, then untapped and tried Huntmaster of the Fells. With its ability on the stack, Stark played Devour Flesh, leaving Mann with just a 2/2 wolf.

Stark found a Hallowed Fountain and paid 2 life to get it untapped. Mann hit him for 2, then tapped his four mana for Olivia Voldaren, which resolved. He passed without playing a fifth land. Stark cycled Azorius Charm, then paid 2 more life to get his Watery Grave Untapped. Mann's attack brought him to 9. Mann played Forest and Thragtusk, and Stark drew three with Sphinx's Revelation. Stark paid 2 more life for Godless Shrine and cast Supreme Verdict.

Still, Mann was on the offensive. His beast charged in, and he added Huntmaster of the Fells to his team. Stark untapped and played another Verdict. Mann replaced his Huntmaster. Stark milled him with Nephalia Drownyard and played a third Verdict. 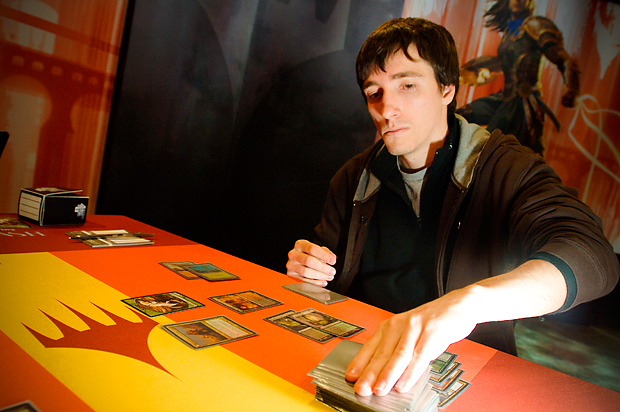 Mann attempts to get a Huntmaster of the Fells to stay in play for a turn.

Mann, still on just five mana, went for Liliana of the Veil, but Stark had Dissipate. Mann got a sixth land with Farseek and passed. Then came a ninth land for Stark, and his third white. He passed back on the empty board with four cards in hand.

Now Mann tried Garruk, Primal Hunter, and this planeswalker resolved, giving him a beast token. It was a big step in the right direction for Mann, one of his most persistent threats, and hard for Stark to answer. Stark searched for answers with a Sphinx's Revelation for six. He tried an Augur of Bolas but came up empty. Mann took it down with Abrupt Decay and attacked for 3, but lost the token to Azorius Charm. Garruk immediately replaced it.

Stark played a second Nephalia Drownyard. Mann hit him down to 10, then summoned Thragtusk. Dissipate stopped it. Mann made another Beast with Garruk and passed. Stark played Sphinx's Revelation for five. Ultimate Price took care of one token, and an Azorius Charm took out the other when it attacked. Garruk went up to seven loyalty to keep Mann's beast business alive. Still, Stark had the goods, yet another Sphinx's Revelation for five. Another Augur served up Planar Cleansing, and it looked like he was finally in the clear. Tons of land, tons of cards in hand. He didn't even need to use the Cleansing immediately.

Mann thought for a bit, then activated Garruk's card draw ability for three. He played Kessig Wolf Run and swung in, but it was far too late. Stark had gained too much life, and played a pair of Restoration Angels flickering Augur of Bolas for Devour Flesh and Dramatic Rescue. His sudden air force killed Garruk. Mann overloaded Mizzium Mortars to clear out Stark's creatures, but it was the Nephalia Drownyards that were the real threat. He started to mill for nine, and then added a Jace, Memory Adept to finish off the job.

Mann was happy to move on to sideboarded games. He got to get rid of his useless removal and Nighthawks and bring in Deathrite Shamans, Garruk, Slaughter Games, Duress and Underworld Connections. Stark swapped out Devour Flesh, Ultimate Price, Dramatic Rescue, Augurs of Bolas and a Snapcaster Mage for Angels of Serenity, Duress, Jace, Negate, and Witchbane Orbs.

Stark had to mulligan his first hand, but stayed on six. Mann passed his second turn without Farseek, and Stark played a second-turn Duress.

It revealed good news: Mann had four land in hand, along with Dreadbore and Rakdos's Return, which quickly hit the bin. They played out lands, Stark checking off each of Mann's lands from the Duress. Mann tried Thragtusk, but Stark had Dissipate, and then Witchbane Orb further complicated matters. If there was one bit of hope for Mann, it was that Stark stalled on five lands. 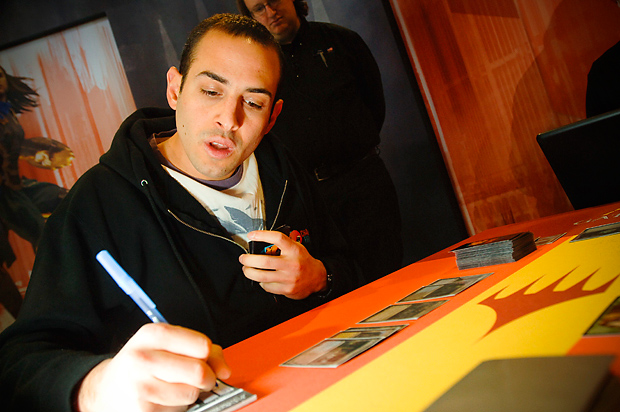 Stark's intel thanks to Duress serves him well.

Mann tried Garruk, Primal Hunter, but Stark had Negate. Stark started hitting land drops, and Mann seemed unable to draw action, instead finding a pair of Farseeks. Stark's Nephalia Drownyard began working. Soon Mann had eleven land in play and a swiftly growing graveyard. Huntmaster of the Fells drew Supreme Verdict. Underworld Connections showed up for Mann, but it looked like it was already too late. He played a second Huntmaster. Stark milled and played another Supreme Verdict, then Jace, Memory Adept to mill Mann out.

Again Stark had to mulligan. Mann's start was much better in this game, with Farseek and a turn-three Liliana of the Veil. He started increasing her loyalty. Stark played a land and passed. Mann ticked up Liliana again, then Duressed. Stark turned over Planar Cleansing, Jace, Memory Adept, Sphinx's Revelation and a fourth land. He took the Cleansing and played a Huntmaster. It was a backbreaking opening. 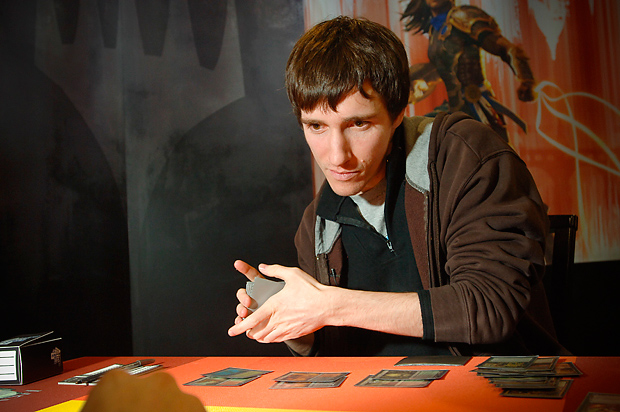 Farseek allows Mann to get ahead quickly in his third game.

Stark played his fourth land and passed. The Huntmaster flipped and Mann swung with both his creatures. Kessig Wolf Run added damage, leaving Stark at just 9. He played a Sphinx's Revelation for one, then untapped, played a fifth land tapped, and passed it back.

Mann took a moment to consider his options, then sacrificed Liliana for her ultimate ability. Stark floated mana, and after losing two lands summoned Restoration Angel. Mann swung in with Ravager of the Fells. Stark declined to block, falling to 6. Mann played a Thragtusk, and after drawing his next card, Stark packed them in.

For the sake of novelty, Stark got to play with a full seven cards this game. Mann opened with Deathrite Shaman, then another on turn three, while Stark amassed lands. By turn four, Stark had only one blue source. Mann made no play on his fourth turn, save dinging Stark for two after he cycled Azorius Charm at end of turn. Stark found another Glacial Fortress, and passed back.

Mann attacked for one, then took a moment before playing out his fifth land and Olivia Voldaren. That was enough to convince Stark to play Supreme Verdict. Mann rebuilt with another Shaman and a Thragtusk. Stark made no play on seven mana and passed his turn with five cards in hand. Thragtusk beat him down to 12. Mann tapped five for Garruk, Primal Hunter and seemed surprised when it resolved. He looked the situation over, and sacrificed Garruk for five cards.

It looked really good for Mann. Duress revealed what Stark was working with: two sphinx's Revelations, an Azorius Charm, a plains, and Jace, Memory Adept. He took one of the Revelations and passed. Stark played Revelation for four. He untapped and played Drowned Catacomb and Supreme Verdict, leaving Mann with just a 3/3 token. The Deathrite Shaman exiled Supreme Verdict for 2 more damage, leaving Stark at 14. Stark tapped the rest of his lands for Witchbane Orb.

Mann hit for three and played Thragtusk. Stark summoned Angel of Serenity, getting rid of the beast token and giving him a big blocker. Dreadbore from Mann cleared the way for another attack, but Azorius Charm put Thragtusk back on top of Mann's deck, giving him a beast for his trouble. Mann had yet another Thragtusk to play, but Stark had a solution. First Supreme Verdict for the board, then he cast Jace, Memory Adept, drawing him a card and milling away the Charmed Thragtusk. Mann summoned Huntmaster of the fells and passed. 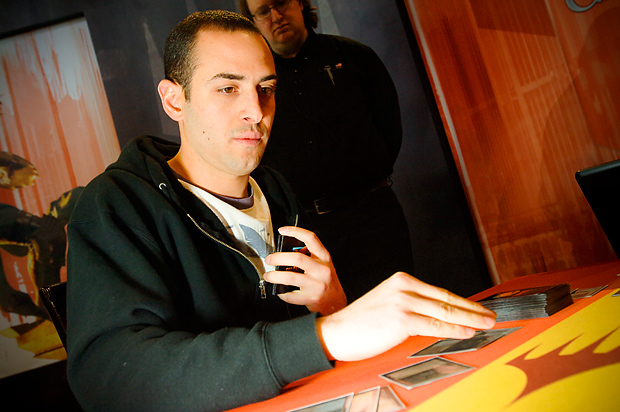 Stark's Esper deck is great at defending from multiple modes of attack, and each turn he buys brings him another step closer to winning through his Nephalia Drownyards.

Stark checked on Mann's deck, thirty-eight cards, then drew a card with Jace and passed. Huntmaster flipped but couldn't target Stark because of Witchbane Orb. The beast and Ravager attacked Jace, and the wolf swung at Stark. The attacks went through, and Jace went to the graveyard. Stark was down to 9. Mann agonized over what to do, but made no play. When he ended his turn, Stark played Sphinx's Revelation for eight, zooming back up to 17 life and a stacked grip.

Things got worse for Mann when Stark summoned another Angel of Serenity, clearing out Mann's tokens and holding the second Angel for later. Mann tapped four for Olivia Voldaren, and it resolved. Mann played a land to give him access to seven mana, and he pinged the Angel, then stole it. He hit Stark to 13 and passed. Planar Cleansing wiped the board, and Stark replaced his Witchbane Orb.

That looked like the beginning of the end for Mann, down to just two cards in hand against a protected Stark, who was busily burning through Think Twices. Nephalia Drownyard started to do its work. It was joined by a second, and now Mann's deck was evaporating. He didn't even bother drawing it out, extending his hand in defeat.

Ben Stark wins 3-1 and advances to the Semifinals!