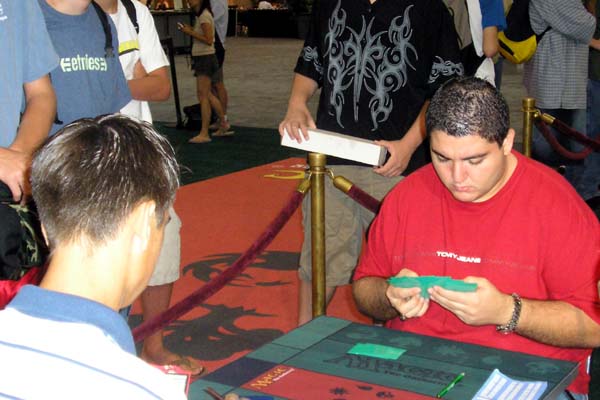 De Rosa just keeps getting better at professional card games. He has enjoyed increased success on the Pro Tour and Grand Prix circuit this year, his close friends on the Pro Tour consistently finish in the money, and he is a bona fide superstar in another Collectible Card Game of note, meaning Ant is on fire. That trend was further backed up this weekend, where the Italian Stallion finished Day One undefeated and is now playing in his first U.S. Nationals Top 8. It also helps that he's one of the biggest and most loveable goofballs on the Tour, meaning he has a heavy fan following here this weekend.

Sitting across from him is budding star Kyle Goodman. Goodman typically does very well at U.S. Nationals, but it's usually from the other side of the aisle where he finished second and fourth in the Junior Super Series over the last two years. Since then, he has put up a 10th-place finish at his first Pro Tour in Columbus, and finished in the money in Philadelphia. Combine that with his Top 8 here this weekend, and he's 100 percent lifetime for Top 64 or better at Pro Tours or Nats.

The deck matchup here is an interesting one, with De Rosa playing Monoblue Tron designed by teammate Gerard Fabiano, while Goodman is running Rat Deck Wins, a mid-game deck designed to lock up an opponent's resources with clever plays and ninjas while whittling away his life totals. Goodman clearly wants to make De Rosa drop his hand and live off the top of his deck, while De Rosa wants to counter Goodman's best spells, use his card drawing to keep his hand full, and then play fat robots while avoiding Ink-Eyes.

De Rosa paused for a long time, considering the options his deck gave him. "I'm going to lose, but I'll keep."

Goodman started off quite well with his opening hand, playing naming on turn one and on turn two. De Rosa's first play in the game was to imprint a Condescend on Chrome Mox in order to cast Solemn Simulacrum on turn three. 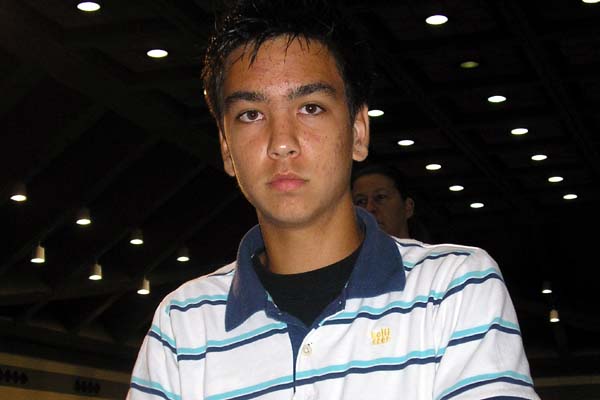 Game 1 went to the Rats.

The annoying little rodent (Shortfang, not Goodman) went to work on De Rosa's hand, but not before he cast . De Rosa put a Mindslaver down on the board on the next turn, but Goodman had an answer for the legendary artifact in Viridian Shaman, and things began to look very bad for the Italian Stallion.

Goodman attacked on his next turn, turning an unblocked Stabwhisker the Odious into Ink-Eyes, reanimating De Rosa's dying Solemn Simulacrum. De Rosa drew and cast Thirst for Knowledge on his next turn, but after snatching only lands from his deck, he conceded Game 1.

"Alright… this game you can beat me, but not that fast," quipped De Rosa, smarting from the game loss.

"Man, my hands can't be any worse," complained De Rosa. "How lucky are you? I'll keep, but this is so miserable."

Goodman mulliganned and then expressed severe skepticism when De Rosa admitted he too should have mulliganned. The six-card hand was deemed an improvement over the one-lander he threw back.

De Rosa cast a first turn Top, followed by Mana Leak on Goodman's . At that point, Goodman ran out of gas while De Rosa built his board position and started stacking up counters. On turn 6, De Rosa used his Top during his upkeep, briefly put the cards back on his deck, and then picked them up again to rearrange them. Goodman pointed this out to the judge, wondering if it was okay, while De Rosa said that it wasn't a big deal and he'd spend the extra mana this turn if necessary while retorting the line of the tournament thus far:

De Rosa hit the full Urzatron while Goodman had nothing on the board, a couple of sad robots began the beatdown, and then Memnarch showed up to try to ruin Goodman's day.

Goodman had a Viridian Shaman to destroy Brainiac, but De Rosa made the Shaman into an artifact before bouncing Memnarch back to his hand. On the next turn De Rosa recast Memnarch, stole Goodman's Shaman, and earned a concession on Goodman's next turn.

"What grade are you in?" asked De Rosa.

"I'll be a senior in high school," came the answer.

"You get all the girls?"

"I do okay," chuckled Goodman.

"You show them all that JSS money and Magic money? I bet they dig that," said Ant.

De Rosa drew his opening set of cards for this game and complained, "During the tournament, I always had the Tron in my opening hand and I never had to think. Now… man, this deck is bad without the Tron." 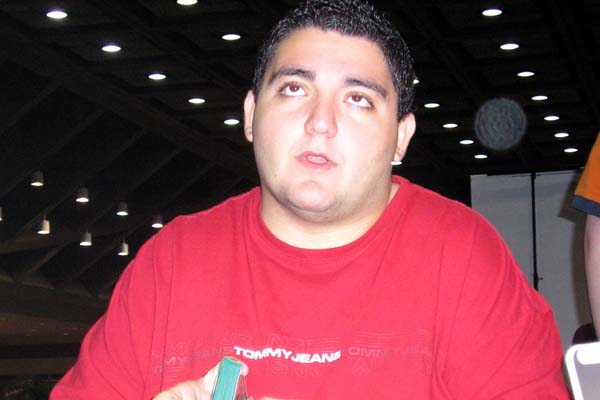 De Rosa kept his hand anyway and Goodman had the good start again with on the Top and a second-turn , stealing Mindslaver.

"Now that you've seen both of our hands, who's going to win?" De Rosa asked.

"Man, I thought I was dead for sure."

"I didn't know you left Mindslavers in!" exclaimed Goodman.

Goodman built up a minor army of rats of the Ravenous and Chittering varieties plus two Aether Vials. "Now, I draw it!" Goodman lamented, casting for Triskelions and then confessing his confusion over De Rosa's sideboarding strategy.

De Rosa drew and cast Concentrate post-Extraction, drawing another Talisman of Dominance and two Memnarchs, putting Ant right back in the game. De Rosa drew Meloku on his next turn, casting it before it immediately died to , but not before the foppish legend could put three illusions into play. De Rosa added Memnarch to his board of illusions and Triskelion, and Goodman again conceded, giving De Rosa the lead.

"You have no idea how nervous I am right now! I am so nervous," admitted De Rosa before he trekked off for a bathroom break.

Both players quickly kept their openers in Game 3, with Goodman kicking off the action via a turn-two Night's Whisper. A turn-three Ravenous Rats from Kyle hit a Mana Leak. Goodman resolved another Night's Whisper on the next turn, and then cast Aether Vial only to see it Condescended.

"I am a tricky, tricky man," was the sly reply from Antonino.

Two es from Goodman stole all of De Rosa's card drawing, but after a Solemn Simulacrum and Triskelion (destroyed by Viridian Shaman), De Rosa topdecked another Thirst and drew into gas. made De Rosa discard an , but Triskelion shut down the annoying rat before he ever got a chance to flip. killed the Trike and Goodman dumped his hand, casting a second Shortfang and laying his final land.

De Rosa cast a Mindslaver on his turn, but didn't have enough mana to activate it so he started saying, "No INK-EYES, PLEASE no Ink-Eyes. Is it Ink-Eyes?" during Kyle's upkeep. "Did you draw it? Don't slow roll it!"

Goodman did not draw it - at least not until the turn after De Rosa activated his Mindslaver.

Antonino made Goodman attack with Shorty into the Solemn Simulacrum, tap all of his lands, and take one from his City of Brass. De Rosa then passed the turn back to himself and attacked with Solemn Simulacrum, dropping Goodman to 1 before casting a second Mindslaver, once again without enough mana to activate it.

"Do you know that your City of Brass is going to kill you, Kyle?" asked De Rosa, cackling with glee as Kyle's eyes went wide.

Goodman drew , getting a huge roar from the crowd. The Needle named Mindslaver, granting Goodman new life, however tenuous that might be.

"I think that was my only out," said Goodman. "Well, that or Viridian Shaman," De Rosa said. Goodman pointed to the lack of counters on Tendo Ice Bridge, and De Rosa smacked his head.

Thankfully for Antonino, he drew Echoing Truth so that Goodman's blocking Ink-Eyes was out of the picture, and the attack from Jens finished off the former JSS star who has now turned into quite the player on the senior circuit as well.