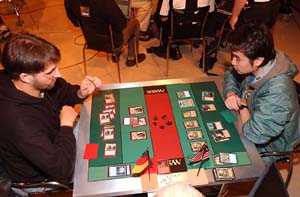 Everyone expected Mark Ziegner to be playing on Sunday, although not in this format, and not in this capacity. As a member of the German National Team, Ziegner—with Kai Budde and Felix Schneiders—will be playing in the team draft finals as expected. But he's filled up his plate by making the individual Top 8 as well, and will now attempt to join Jon Finkel as the only player to win the individual and team events at the same Worlds.

By the same account, no one expect Sim Han How to be playing today, not even Han himself. Han How, the rookie Malaysian National Champion, is playing in his first Pro Tour, and after dominating the Swiss for the first two days, had an easy ride to the Top 8 at the end.

Ziegner is playing blue/black/red "Burning Tog," which employs a sideboard full of pinpoint one-of sorceries to be fetched with Burning Wish, such as Stone Rain, Lobotomy, and the wacky Seize the Day.

Han How is running the deck that supposedly beats 'Tog, Squirrel-Prison. The addition of Phantom Centaurs also furthers this goal, although the red in Ziegner's deck can be a problem for Han How.

Both players chatted as they shuffled, and the match started off cheerily.

Han How had no such luck, settling on a turn-2 Wild Mongrel, which got in an attack on turn three. Han How then attempted a Squirrel Nest when Ziegner's lands were Urborg Volcano and Shivan Reef, meaning Counterspell was not an option.

Ziegner took one to cast Memory Lapse. "One more damage!" cried Han How. The nest was Lapsed again on the following turn, and then Ziegner dropped a Psychatog. The thirst attempt at the Nest was hit with a madnessed Circular Logic, but Han How discarded a Flametongue Kavu to his Mongrel before casting his own Circular Logic for the necessary one. The Nest resolved.

Ziegner dropped a Flametongue on Han How's Mongrel on the following turn and attacked for one. Han How tapped out to drop Opposition, which resolved, although Han How was still unable to make a single Squirrel.

The German cast a main phase Fact or Fiction before attacking, revealing three Islands, a Nightscape Familiar, and a Circular Logic. Han How put two Islands with the blue card, and that was the pile Ziegner kept. Ziegner sent the 'Tog and the FTK into the Red Zone, and stopped to do some calculating on a sheet of paper. After he was satisfied with his numbers, he discarded three cards to the 'Tog and then removed six from his graveyard to take Han How's life from 15 to 4.

His calculations worked perfectly. With three cards left in his graveyard and a Circular Logic in hand, Ziegner was able to force Han How to tap his Squirrel Next to pay extra for his Wild Mongrel, meaning he couldn't stop both the 'Tog and the FTK the following turn, both of which were capable of dealing the four lethal damage.

If the Malaysian had been a little stingier with the Fact or Fiction split, putting only one island with the Logic instead of two, the game wouldn't have ended so poorly for him.

Han How's opening grip for Game 2 had a Llanowar Elves, a Deep Analysis, and Opposition, but no blue land. He was forced to mulligan. Ziegner took a drink of his soda, and offered to buy Han How dinner at next year's Worlds in Germany. The two competitors were certainly having a good time regardless of the obvious pressure.

"Did you give me a good hand?" asked Han How as he dealt himself six.
"No," replied Ziegner, "It's enough that one person has a good hand."

The new six were four blue cards, forest, Karplusan Forest. Han How threw it back. The fiver had two Birds of Paradise but no lands at all. Down to four. The four he kept were Forest, Yavimaya Coast, Merfolk Looter, and Phantom Centaur. Not bad, really.

Han How drew a third land and a Squirrel Nest, then Looted once for a fourth land to play a Phantom Centaur. Quite a start!

Ziegner played a Psychatog, then killed the Looter and shrunk the Centaur with a Fire. On his next turn he shrunk the Phantom again with a Flametongue, but he wasn't out of the woods yet. A Burning Wish got a Deep Analysis from Ziegner's sideboard , and he also played a second 'Tog. 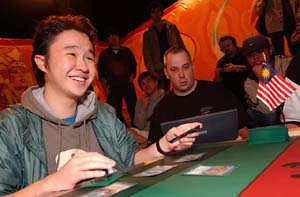 After a few mana draws, Han How eventually drew and played a second Looter. Ziegner let it resolve, the Repulsed his own Flametongue Kavu then recast is to kill the blue 1/1. Ziegner then played his own Looter, quite an eccentric card for a 'Tog deck.

Ziegner was building a great hand thanks to the Analysis and the Looter, and he added a Nightscape Familiar and third Psychatog to the board. He then killed Han How's Birds and Phantom Centaur with a Fire, but had to mana burn for one—down to six life—when he forgot about the Familiar. Han How was staying alive thanks solely to the nest—he had out eight tokens.

Ziegner cast a Fact or Fiction, turning over five spells, including a Burning Wish that could be used to fetch a Stone Rain to eliminate the troublesome Nest. He also admitted to Han How that he had a hand full of countermagic, and Han How knew to scoop 'em up.

The game lasted longer than any game involving a four-card hand should have, but Han How never got ahead.

The pair waited as the cameras were wheeled into place; their third game would take place on camera, complete with live commentary, in front of the crowd. Han How was down to his final chance, and needed to rattle of three straight wins in order to advance.

At least his deck cooperated in the third game. He didn't have to mulligan, and he even had a turn-one mana creature, a Llanowar Elves.

Han How laid his third land and cast a Wild Mongrel. Ziegner put down another Urborg Volcano and a Nightscape Familiar, which died on the next turn to Fire. Han How had no fourth land, and just attacked with the Mongrel and a Squirrel.

Ziegner made another Familiar and finally put out a blue mana source. Han How didn't find the land he needed, so he just attacked with the team and pitched a Deep Analysis to his Mongrel. When he went to flash it back in his second main phase, Ziegner Memory Lapsed it out of the game. On his next turn, Han How made the same attack and again discarded an Analysis to his Mongrel, but this time Ziegner Repulsed the Hound, giving Han How the option of drawing cards or putting his creature back out. The Malaysian opted to flash back the Analysis, but still found no fourth land. 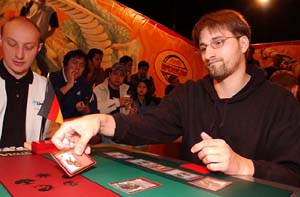 Ziegner cast Deep Analysis and passed. Han How attacked with four Squirrels; one was blocked, two were Fired, and one got through, bringing Ziegner to six. Ziegner untapped, flashed back his Analysis going to three, and attacked with his Familiar. A Flametongue Kavu killed Han How's last Squirrel, and Ziegner also added a Psychatog to the table.

Finally, Han How drew a fourth land. His hand had slowly been filling up with Oppositions and Phantom Centaurs. His life was dangerously low because his only source of green to this point was a Karplusan Forest, and he had paid the flashback on two Analyses. Needing to get lucky, he tapped out to attempt an Opposition. Of course, one of the last two cards in Ziegner's hand was a Circular Logic.

Does Opposition beat Psychatog? Apparently not. Ziegner will now face the winner of Humpherys/Larkin in the semifinals.