It was established pro versus rising star here in the quarterfinals, and both players appeared calm and confident in their decks. Luis Scott-Vargas, Magic maven and fan favorite, had settled into infect in the middle of pack two and gotten hooked up in a big way, including tabling both Phyrexian Hydra and Plague Stinger. With the help of Sphere of the Suns, he had a small red splash for removal. 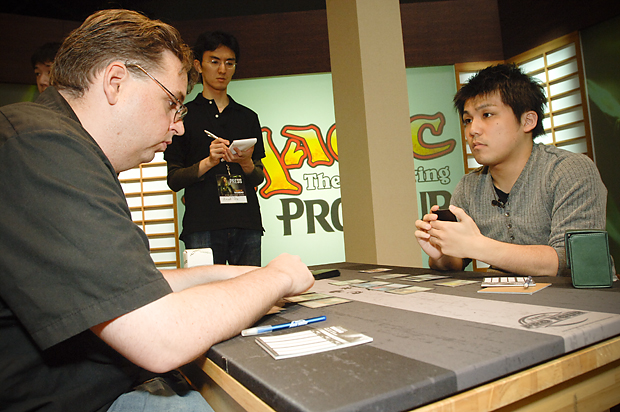 Luis Scott-Vargas and Toshiyuki Kadooka both seem confident about their chances.

Kadooka, an up-and-coming grinder from Japan, had drafted green-black non-infect, touching blue for some powerful cards like Treasure Mage (Thopter Foundry definitely counts as a treasure), Vedalken Anatomist, and Phyrexian Ingester. A pair of Viridian Emissaries helped to smooth his mana.

Scott-Vargas won the roll and opened with a start worthy of the Constructed rounds: Plague Stinger and Phyrexian Crusader. Kadooka dropped a Viridian Emissary and a Neurok Replica on three Forests, and Scott-Vargas continued to poison in the air, unwilling to give him a free land off the Emissary. Scott-Vargas passed without playing a fourth land.

Kadooka sent the Viridian Emissary in for 2 damage, then played Cystbearer. Scott-Vargas found his fourth land, another Swamp, and stung Kadooka for another poison. Finally Kadooka found an Island, and that convinced Scott-Vargas to block the Emissary and give Kadooka his land. Kadooka searched out a Swamp and cast Vital Splicer. 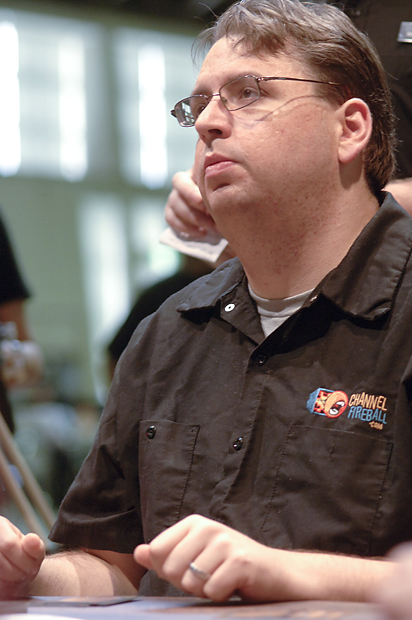 LSV thinks hard during the draft.

Scott-Vargas pulled a Mountain off the top and wasted no time dropping Oxidda Scrapmelter on the Golem token. It looked disastrously premature when Kadooka played Treasure Mage and dug up a Thopter Assembly, but Scott-Vargas's attitude was light. He was holding Spread the Sickness.

He swung in with Plague Stinger and gave Kadooka his fifth poison counter. Then he played a second Stinger. Unfortunately for Scott-Vargas, Kadooka had something to play before he got his Thopter Assembly into play: Spellskite. Suddenly that Spread the Sickness wouldn't help anyone. Scott-Vargas attacked with his Plague Stingers, and Kadooka bounced one to stay at just six poison. Scott-Vargas replayed it and passed.

Down came the Thopter Assembly. Scott-Vargas thought hard for a couple minutes. Eventually he chose to cast Pestilent Souleater. The Assembly churned out its tokens, and Kadooka replayed it. Scott-Vargas aimed his Spread the Sickness at it, but of course Kadooka redirected it to Spellskite. From there, the air force took down Scott-Vargas.

With that aggressive of a start, Scott-Vargas chose to summon Pith Driller next, killing the Viridian Emissary and giving Kadooka a land. Three more poison put him to five. Unfortunately for Scott-Vargas, Kadooka was already holding the deadly Thopter Assembly. He played his sixth land and put it on the table. 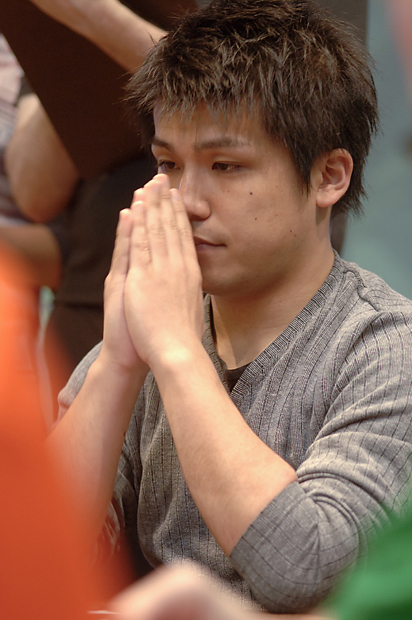 Scott-Vargas plucked his top card, but it was not the Mountain he needed to turn things around with Oxidda Scrapmelter. He passed the turn back. Kadooka got his fliers and replayed his Assembly. Scott-Vargas's deck coughed up the Mountain a turn too late. He Scrapmelted the Assembly and passed the turn. Things got worse when Kadooka showed him Entomber Exarch to get the Thopter Assembly back, as well as a Vital Splicer.

Scott-Vargas untapped and played his sixth land, and then Mindslaver. That put Kadooka into the tank for his turn. He counted his mana and surveyed the board, wondering how bad the Slaving could get. Eventually he chose to play Neurok Replica, bounce his own Entomber Exarch, and then replay it, stealing Mutagenic Growth from Scott-Vargas's hand.

Scott-Vargas played another Plague Stinger and activated his Mindslaver. Kadooka drew a land, and Scott-Vargas forced him to swing in with all his creatures, blocking what he could and going down to just two. He had four poison damage in play, all he needed was one good draw to steal the match. He peeked at his top card, but it was not to be.

Scott-Vargas opened with Plague Myr, but did nothing but play a land and attack on his third turn. Kadooka started with two Swamps and an Island for Treasure Mage and his buddy, Thopter Assembly. Scott-Vargas stocked his hand with Caress of Phyrexia.

Kadooka played another land and a Ratchet Bomb. Scott-Vargas showed him what a real spell looks like: Phyrexian Hydra. Kadooka tapped five for Pestilent Souleater. Scott-Vargas took care of that with Burn the Impure, then sent his Plague Myr and Phyrexian Hydra across. The Treasure Mage bravely stood in front of the Hydra and shrunk it to 5/5. Kadooka was at two poison. 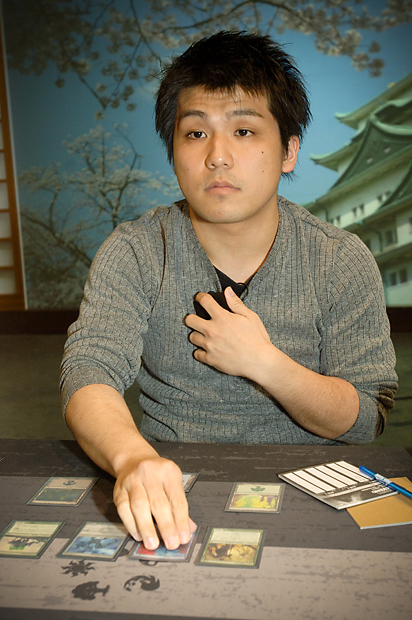 Kadooka leans heavily on Thopter Assembly, with Treasure Mage to help find it—a strategy that seems to be paying dividends.

He ticked his Ratchet Bomb up to two and dropped the Thopter Assembly. Scott-Vargas was ready for it this time, with Oxidda Scrapmelter in hand. He stomped the Assembly and swung in with his monsters. The Bomb took out the Myr, but Scott-Vargas still wasn't done. Mutagenic Growth on the Hydra put Kadooka to nine poison, and Grim Affliction's Proliferate provided the last counter.

Kadooka led out with Spellskite and the ubiquitous Treasure Mage, fetching Thopter Assembly. Scott-Vargas played a third-turn Whispering Specter, but Kadooka was ready with Trigon of Corruption. That put Scott-Vargas into the think tank for a good minute. Nothing seemed to line up for him.

Eventually he chose to play Mountain, then Trigon of Rage, and attack with the Whispering Specter. He gamely tried to pump, but of course Kadooka wasn't about to forget his Spellskite. Kadooka untapped and killed off the Specter. Scott-Vargas's way wasn't getting any better. He played out an impotent Blind Zealot. 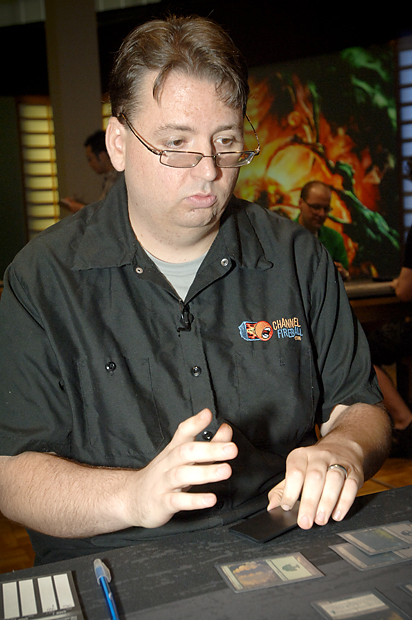 Luis struggles for an out.

Kadooka played Thopter Assembly, and Scott-Vargas was powerless to stop it blooming into five fliers. After Kadooka replayed it, Scott-Vargas extended the hand in defeat.

Toshiyuki Kadooka defeats Luis Scott-Vargas 3-1 and advances to the semifinals!