Quarterfinals: Something to Mull Over

Three Japanese players made the Top 8 here at PT–Valencia, and Shuhei Nakamura and Takayuki Koike had the unfortunate privilege of playing each other. Things could have been worse, though. Had Shuhei ended up paired against Makihito Mihara, he would have been in for a long first round—both were playing the Japanese-designed Blue-White 'Tron deck. His opponent, Takayuki Koike, is a first-timer here at the Pro Tour and has already managed to cruise his way to the Top 8 stage. His deck of choice for this weekend is a take on the Domain Zoo that skyrocketed in popularity after Raphael Levy used it to win GP–Dallas earlier this year. Something about getting to play all five colors has always appealed to me, so I'm always glad to see decks like this doing well. 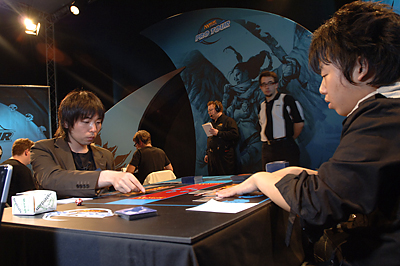 Shuhei Nakamura and Takayuki Koike vie for the chance to represent Japan in the Semifinals. Shuhei won the roll and decided to play first in this untimed best of five match. His opponent, Takayuki Koike, started things out with a Grim Lavamancer and a Dark Confidant, about as good a start as his deck could hope to get. Shuhei was ready, though, and had an Azorius Signet to power out a third-turn Wrath of God. Koike began committing his resources to denying Shuhei his. On two consecutive turns, Shuhei had an Urza's Power Plant reduced to rubble via a Vindicate. A Fact or Fiction got Shuhei an Urza's Tower and Skycloud Expanse at the expense of a Meddling Mage, Sundering Titan, and Thirst for Knowledge to replace the lands Koike had just destroyed.

By the fourth turn, Koike had managed to get out the full domain while preventing Shuhei from getting any pieces of the 'Tron to stick. His Vindicates expended, Koike had to start recommitting to the board. He managed to get a Grim Lavamancer out, but when he tapped out for an Umezawa's Jitte, Shuhei got an opportunity to Condescend it for one. Still mounting an offensive, Koike aimed a Tribal Flames for the full amount at Shuhei's head, dropping him to 12.

Shuhei's next Meddling Mage stopped any more of those pesky Vindicates, especially any that Koike might feel like aiming at his freshly played Chalice of the Void for two. Two is a fine number against Zoo. No Lightning Helix, Confidant, Jittes, or Tarmogoyfs. The Lavamancer was going to have to work overtime, but he was up to the task. Ten. Eight. The life counted down. Before it got too dangerous, though, Shuhei managed to get an Exalted Angel into play, and Koike couldn't find an answer. Once Sundering Titan hit play on the following turn, Koike decided to move on.

This is the second time I've had the pleasure of watching Shuhei, and it's seemed to me like his deck always seemed to have all the answers it needed. That game, Wrath of God made sure that his life total never got too far in jeopardy, and an Exalted Angel made sure it never would. It seems like Shuhei's 'Tron deck is well geared to defeat the combo and aggressive decks in the format. It'll be interesting to watch him against a control deck. 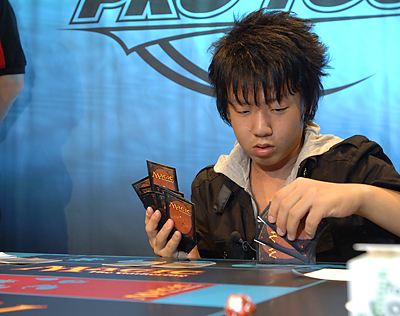 Win or lose, Koike has made his mark. Koike began the second game with a mulligan on the play, which is never good. Any mulligan is bad, but on the play you're effectively putting yourself down two cards. His second hand had only one land and a variety of difficult-to-play spells. To five he went.

A turn-one Duress from Koike revealed a solid starting hand of Exalted Angel, Fact or Fiction, Engineered Explosives, two 'Tron pieces, an Academy Ruins, and a Skycloud Expanse. Looking to protect his future investments, Koike chose the Explosives. However, Koike didn't have any investments for a few turns. His second and third turns passed without a play, while Shuhei, the control player, made the first creature contribution to the board with a "mystery" morph.

Koike did come up with a Vindicate for Shuhei's Skycloud Expanse and denied him access to colored mana. Unfazed, Shuhei just untapped, drew, and played another one. Koike managed to Lightning Helix the face-down Exalted Angel the turn before Shuhei would have been able to flip it via an Azorius Signet. However, Koike's deck still refused him anything of value, and Shuhei was able to draw another Exalted Angel and force the concession.

Koike's deck was much kinder to him for the third game. A first-turn Kird Ape got powered up when he fetched out a Temple Garden on the second turn. Add a Dark Confidant to the mix, and things looked strong. Shuhei had a Meddling Mage for his second turn and the Pikula look-alike shut down Koike's Vindicates.

Koike's first card drawn from a Confidant this match was a doozy. Duress only cost him a single life and was going to help him immensely to maintain his board position. The hand he saw didn't look good. Chalice of the Void, Wrath of God, two copies of Threads of Disloyalty, Engineered Explosives, and an Urza's Power Plant gave Shuhei boatloads of control if he managed to find another land or two, and the Dark Confidant he was probably going to steal on his turn would certainly help.

Koike decided to put the pedal to the metal. The fewer turns he gave Shuhei to find lands the better. Isamaru, Hound of Konda and a grande-sized Kird Ape built the army to a fair size. As predicted, Shuhei took the Dark Confidant with a Threads, but Koike soon burnt that bridge with a Firebolt. Shuhei's Meddling Mage took an Isamaru with it on Koike's attack, and Koike was out of gas. When Shuhei took one of Koike's Kird Apes with his other Threads, and it put the board at a sort of parity. Each player had a Kird Apes, but Shuhei was, ironically, ahead on life 12-9. 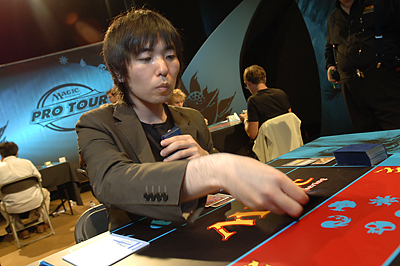 Shuhei makes his move. Koike was down to one card in his hand by this point, and his deck continued to cough up fetch lands. Shuhei wasn't ready to run out of lands either, but his transmuted-for Academy Ruins was a bit better than a fetch land, especially with an Explosives in the bin. Koike did manage to clear the disloyal Apes away with a Lightning Helix, which put him back up to a comfortable 12, but he still had to do 8 more damage to Shuhei with only a Kird Ape and one card in hand. Thanks to a flashed back Firebolt and another attack from a Kird Ape, Shuhei was down to a very precarious four.

He managed to take care of the Kird Ape with another Threads of Disloyalty, but Koike found a Grim Lavamancer to force Shuhei to find yet another answer. Shuhei made a few soldier tokens with Decree of Justice, but unless he removed the Lavamancer, they wouldn't be able to deal the last few points of damage to Koike. Unfortunately for Shuhei, Koike's six lands and Firebolt removed any hope of winning. Take 4.

That was a bit more like what Koike's deck was designed to do, though he did have help from Shuhei's deck's refusal to give him a second white mana source. That's what aggressive decks do, though. They give you a limited window in which to try to win the game. If an opposing deck stumbles, the aggressive deck punishes it mercilessly, as just happened.

Sadly the fourth game was a bit on the anticlimactic side. A mulligan to four was Koike's fifth mulligan in four games. From this point, it was still possible for him to win, but it would require an early Dark Confidant to make up for the loss of cards he'd already incurred. His first turn brought everyone's favorite puppy, Isamaru, Hound of Konda, to the party, but instead of being joined by a Dark Confidant, the Hound was joined only by a Grim Lavamancer to play with. Condescend dealt with the little nuisance before it could hit play. A second Lavamancer on the following turn made it into play, but it was clear that the lack of cards was going to really hurt Koike.

If the lack of a Confidant was hurting Koike, Shuhei put him out of his misery on the next turn. An Engineered Explosives blown for one cleared Koike's board and left him with almost no outs. A fifth turn 'Tron allowed Shuhei to cycle Decree of Justice for six, and the following Sundering Titan got him a place in the Semifinals without any argument from Koike.

Shuhei Nakamura advances to the Semifinals!