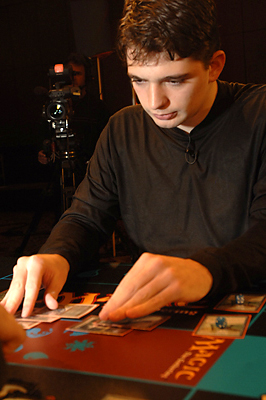 Paulo Vitor Damo da Rosa's name takes up nearly half of this caption.Welcome to the star power match of this Top 8. With eight Pro Tour Top 8s between them, Shuhei Nakamura and Paulo Vitor Damo da Rosa are both intimidating opponents to sit across from. Shuhei went through the tournament with only a single blemish on his record, while Damo da Rosa was the last player to squeak into the Top 8. They sat down across from each other as equals, both searching for their first Pro Tour win to add to their already impressive resumes.

The matchup here is Green-Black Elves for Nakamura versus Paulo's Faerie deck, the sole survivor from the tournament's most plentiful archetype. On paper it would seem that Nakamura has a solid deck edge, but that margin could quickly be erased by bad draws, great plays, or—God forbid—mistakes.

Shuhei started off with a Thoughtseize stealing Rune Snag on turn one, followed by Tarmogoyf and Civic Wayfinder for a Forest on the next two turns. Paulo's only action in the first four turns was to counter Garruk Wildspeaker. Bitterblossom from the Brazilian a turn later was a bit late to the party as Shuhei bashed Paulo again and again, while the Blossom made Nakamura's clock that much faster. One more turn of beats and Game 1 was over, taking almost no time at all to put Shuhei in the driver's seat.

Paulo spent a number of minutes thinking about what to sideboard, though he had assuredly been through his options in his head a number of times last night. 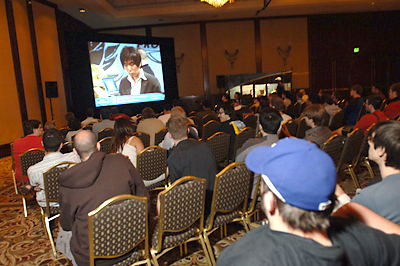 An eager crowd gathers to watch Nakamura and Damo da Rosa fight it out on the webcast.Paulo's opener for Game 2 seemed miserable, with 2 Cryptic Command and Razormane Masticore plus four lands, but he must have figured that he'd have enough time to keep ahead of Nakamura's beats on the play, and then use the Masticore to drop the hammer on whatever got past his counters. Things rapidly improved for Paulo with a pair of Ancestral Visions off the top, though Nakamura did manage to resolve two Bitterblossoms while Paulo dealt with Tarmogoyf and Imperious Perfect. By the time Razormane Masticore resolved, Paulo was facing four Faerie Rogues already and an extra two a turn, meaning his life total was certainly in danger. Damnation cleared the board, but the Blossoms rapidly recruited two more weenies a turn for Shuhei's air force. Thoughtseize stole Mistbind Clique from Paulo, revealing Rune Snag, Cryptic Command, and another Masticore while Paulo looked for better answers to the problems in front of him by drawing four cards on consecutive turns.

Surprisingly, with all of this action, the life totals were still quite close. Shuhei was losing two a turn to his own enchantments, while Paulo was losing life to Faerie Rogues, but the totals were locked at 8–8. At the end of Nakamura's turn, Paulo used Cryptic Command to tap all of Shuhei's men and bounce Mutavault, going on the offensive for the first time in the match by pushing Razormane plus two Mutavaults into the red zone. Nakamura activated his Treetop Village to block the ‘Core and then tried to Terror one of the Vaults, but Spellstutter Sprite made certain that never resolved, dropping Shuhei to four life and then two on his next upkeep. Nakamura drew his card for his turn and then scooped up his board, conceding that he would die next turn to Bitterblossom, regardless of what Paulo did.

Both players kept their hands for Game 3 with Shuhei starting off with a Llanowar Elf and then Thoughtseize, taking Bitterblossom and revealing two Cryptic Commands and a Murderous Redcap plus three lands for Paulo. Tarmogoyf hit the board on turn two followed by Wren's Run Vanquisher a turn later, but a second Elf was deemed one too many by the Brazilian, and he used Spellstutter to make sure it never resolved. The beats came in quick succession now, with Redcap merely providing a speed bump and the Commands buying Paulo three turns without an attack from Nakamura, but nothing more to show for it. He kept failing to find a fifth land for the Masticore. By the time he finally did get it, he was way too far behind, and Shuhei's deck just kept applying pressure, adding another Vanquisher and a Bitterblossom to the board. Despite what appeared to be a better hand from Paulo to start this game, inability to find a fifth land in a timely fashion left him buried by the Elvish swarm.

Paulo led off Game 4 with a Faerie Conclave and Mutavault, while Nakamura had a curious Mutavault opening, followed by Wren's Run Vanquisher revealing Nameless Inversion. Turn 3 saw the Japanese player attacking with both the Elf and his Vault, forcing Paulo to pause and consider his options. He chose to Terror the Vault, taking 3 while Shuhei simply played Treetop Village and passed the turn. Razormane Masticore from Damo da Rosa signalled a shift in the tide, with Paulo killing the Elf and going on the offensive a turn later while Shuhei used Paulo's tap-out for the Masticore to sneak Bitterblossom past any possible counterspells. Paulo discarded Damnation to his ‘Core on the next turn, signalling he was definitely going for beatdown for the rest of the game, to hell with this silly control idea. Mistbind Clique during Shuhei's next upkeep had him again packing up his cards as the match headed to a fateful fifth game. 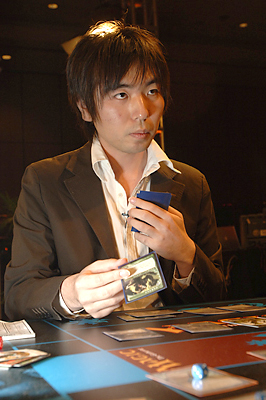 Shuhei Nakamura adds to his army.The pace of play was almost like playtesting, taking only 35 minutes to complete four games in this seesaw battle.

Both men announced confident keeps for Game 5, sending out a flare of warning that there were surely fireworks ahead. Bitterblossom from Damo da Rosa on turn two was impressive, but Shuhei buried him under a pair of Llanowar Elves, Wren's Run Vanquisher, Garruk Wildspeaker, and Bitterblossom, all by turn two. Are you kidding me?!? Damo da Rosa had to attack Mutavault into Garruk just to keep from dying on the next swing! The Brazilian wasn't about to give up, though, using Murderous Redcap to kill a fresh Imperious Perfect from Nakamura, and then forcing Shuhei to cautiously consider what his next attack would be. With Damo da Rosa at 7 life, he only needed to do a scant few points of damage to make subsequent turns trivial, but with so much riding on the line, it would be disastrous to make a mistake here. An attack with everything but Mutavault put Damo da Rosa at 4.

Paulo was able to wipe out most of Nakamura's team on the next turn via flashing in Vendilion Clique and making sound blocks, but there was just no way he could catch back up to Nakamura's Vintage-esque start, and he was soon extending the hand in congratulations.