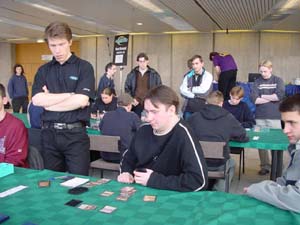 Anton Jonsson is no stranger to this level of competition. He won GP Seville and has made multiple Pro Tour and Grand Prix top 8's. He drafted a mainly black red deck with a red splash for Slice and Dice.

His opponent Jedlicka is less well-known but he has a very quick looking green-red deck to fight for.

These met in the final round with Jonsson needing to win to reach the last eight. Jonsson came out on top that time. Could he repeat the performance against his less experienced opponent?

Jedlicka won the die roll and elected to go first. His red-green deck gave him a quick start as he opened with a bear (Stonewood Invoker) and followed with a morph. Jonsson's first morph was sent to the graveyard with an Erratic Explosion and a Vitality Charm prevented him from trading his Embalmed Brawler for the Invoker.

Jedlicka seemed to run out of gas a little as only a Wellwisher joined his offence and Jonsson was able to get back into the game by Cruel Revivaling Jedlicka's morph and then finally getting to trade with the Brawler.

The Swede was in trouble. He brought in a Gempalm Polluter to try and hold up the ground only for Jedlicka to bypass it with a Wave of Indifference. Jonsson was at 3 life. He cycled Slice and Dice to wipe out Jedlicka's board.

The Austrian Player had a Solar Blast and calmly untapped and sent it to the dome.

Both players mulliganed in Game 2. Jedlicka had to think about his six cards but he kept them. They seemed okay as he followed a turn two Invoker with a Wirewood Savage.

Jonsson took the upper hand by flipping over an Exterminator to take down the Savage.

Creatures traded and the game got down to Jonsson attacking with unblockable Severed Legion while Jedlicka got the life back with a Wellwisher. The Wellwisher traded for the Goblin Turncoat as Jedlicka reached 8 mana and started swinging with a mutant boosted Invoker.

Jedlicka was down to seven. Jonsson happily removed a freshly cast morph with Cruel Revival then untapped and dropped two zombie onto the table. Jedlicka couldn't get through and scooped to take the game to a decider.

Jonsson had to mulligan again. Jedlicka had another curve: Wellwisher, Savage, then the card drawing began as a Vorine came into play. Jonsson managed a pair of Severed Legion only for one to fall to an Erratic Explosion.

When he only laid a land and passed on the fifth turn with a sigh it looked bad for the Swede. He had a Cruel Revival of course. That took out the Savage while Vorine and Severed Legion traded. 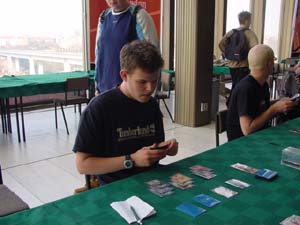 Jedlicka was still kicking. Morph and Invoker. Jonsson's Sootfeather Flock was Blasted straight to the graveyard and Jedlicka smashed in again.

Jonsson made a Legion and Courier and traded off for two of Jedlicka's attackers as the Wellwisher continued to nibble away.

Jonsson just refused to die. A Blade Sliver appeared and the Swede found an Infernal Caretaker to not only trade with it but to fetch back all of Jonsson's zombies.

The Swede was fighting back as two Severed Legion and a Frightshroud Courier returned to Jonsson's board. A Blistering Firecat screeched through for an extra five damage but Jedlicka was finally looking stalled.

Jonsson had a long way to go. Thanks to the Wellwisher Jedlicka was still above twenty life. Jonsson was clawing at it with a Severed Legion and had a Courier and Goblin Clearcutter to try and preserve his precious two life.

Wave of Indifference was terminal.