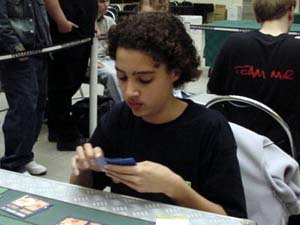 back to GP Goblins! Even though only four of the top eight players are running the little green men here in Brussels, this quarterfinal sure is full of them. Stefano and his boys have had a great weekend so far, losing only once in the swiss. You might know him from his two GP top 8s in Lisbon and Genoa. Stefano's philosophy seems to lie in all in his deck names, as he top 8ed Genoa with virtually the same deck which he named 'Goblins go to New Orleans'. This weekend he named his deck 'Goblins go to Columbus'. Might be an interesting anecdote for all those aspiring PTQ players out there…

Julien is the youngest rising star in The Netherlands and seems to be on fire lately, winning nearly every tournament he plays in. After winning a trial and making money with his team at GP Bochum this is his individual break out performance. His Goblin friends have done him well this weekend with a little help of his sideboarded Furnace Dragons.

Stefano wins the roll and leads with a Prospector. On his third turn, when the Warchiefs and Sharpshooters of this world normally come out he only has a measily Sledder, keeping lands untapped for Gempalm Incinerator. Julien's Warchief is the target and a turn later the Sharpshooter does make an appearance on the Italian side. Juliens next turn turns out to be dominating, as he is able to Bolt the Shooter and make one of his own. Stefano is stuck with a hand of Sparksmith, Oxidize and Sharpshooter and can do nothing but sees his men die and thin his deck with Wooded Foothills. His deck is not deck kind to him either, supplying nothing more than extra mana sources. Julien just continues to dominate until he finds a Clickslither to take it home.

Stefano hits fast and hard this game as he gets to Oxidize Julien's first artefact land. He misses his second land drop for a turn and can't do anything significant until he has two Warchiefs attacking him. Stefano has the necessary removal however and even a Siege Gang Commander can't pull Julien back into this game.

In the decider Julien gets to start. He sees his second turn Sparksmith go uncontested. Stefano even answers with a Sparksmith of his own, instead of Bolting the one already in play. After getting his Smith smithed he does nothing in his next few turns, probably trying to trick Julien into overcommitting into his Starstorm. Julien is on to him though and just keeps attacking until he misses his fifth land drop and lays a Sharpshooter. Stefano debates Starstorm for a while but decides to leave it, choosing to untap and make a Warchief instead. This one gets shot too, putting Julien at 15. Next turn his plan becomes clear as he plays Goblin Goon, intending to finish the game quickly after Starstorming away the opposition. Julien gets him down to 11 after adding a Warchief to his team. When the Starstorm finally comes things get really complicated, with players building a stack. On the board are an Italian Goon and a Dutch Sparksmith, Sharpshooter and Warchief. Starstorm for one triggers Incinerator on the Goon, prompting a Bolt on the Shooter, which pings the Goon for one. The one damage resolves and Stefano now Bolts the Warchief too, making sure that Julien can't finish off the Goon if he has a Bolt. Everything resolves, Julien gets to keep his Bolt but the 6/6 looks threatening on an empty board. 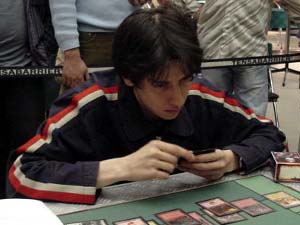 Fortunately for the young Dutchman Siege Gang Commander & friends appear. Stefano has a Sharpshooter and removal for the main guy and Julien is left with just the sidekicks. He still has a hand of Electrostatic Bolt and another Siege Gang forcing Stefano to either to have a Starstorm or scoop. Stefano's draw step reduces the possibilities to the just the latter and Julien advances to the semis.