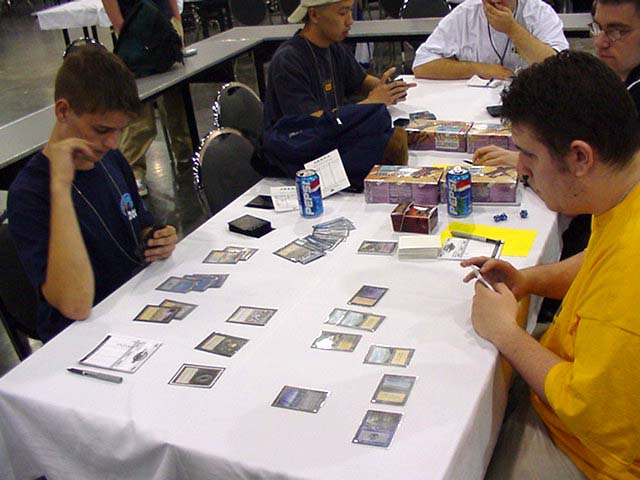 Quasi-friendly banter abounded as these players sized each other up. Landen bolstered his opponent's confindence claiming that his match was unwinnable. He went on to demonstrate his incompetence by forgetting his home address.

Rodemann won the roll and chose to play. Both players kept their hands. Rodemann made the first move with a Turn 3 Vindicate on Landen's Coastal Tower. It was Counterspelled. Landen untapped and laid Tsabo's Web, but Rodemann couldn't capitalize on his tapped-out state.

He stalled at four land and watched as Landen Fact or Fictioned into Millstone, Opt and Plains over Accumulated Knowledge and Wrath of God. The Stone came out next turn.

Rodemann dropped Arena, and Landen let it hit, destroying it with Dismantling Blow. Rodemann matched him with Disenchant on Millstone. Still, they were clearly playing Landen's game. Rodemann's Nether Spirit was neutralized by a Story Circle: Black. Another Arena met a Dismantling Blow. Then Landen played a second Stone.

For many turns, Landen kept on top of Rodemann's attempts to stop the Millstone. However, by playing so many card drawing spells, his library was rapidly depleting. Rodemann, by comparison, had forty cards remaining. Four turns later he played Millstone number three, and the race was in his favor.

Still, Rodemann kept pressure on his countermagic with Chimeric Idol and Duress, eventually managing to rid Landen of permission. He had no way of stopping the Millstones, though, so it was all for naught. His library gone, he lost the first game.

In Game 2, Landen mulliganed his first hand. Rodemann was relentless, first stripping him of Disrupt with Duress, then playing Gerrard's Verdict once the way was clear. Landen lost Dismantling Blow and Accumulated Knowledge, then Fact or Fiction and Plains when Rodemann doubled up.

However, Rodemann didn't have anything to follow it up. He watched as Landen played Accumulated Knowledge into a Counterspell for his Chimeric Idol. Then he cycled through his deck with Opt and Tsabo's Web. The game that Rodemann thought was won was slipping away from him.

He did have a weapon on table, a Nether Spirit. The little soldier dropped his opponent to seven. Rodemann had meanwhile built up a hand of defensive spells, and unleashed them when Landen dropped Millstone. Landen had two Absorbs and a Counterspell waiting. He was suddenly at fourteen, a life boost he sorely needed.

Landen dropped another Stone and went to work. Rodemann kept the pressure up, depeleting his opponent's countermagic before dropping Ivory Mask, stopping Landen's Millstones. Landen was forced to drop himself to two cards in library finding a Disenchant. Fortunately, one of them was Legacy Weapon, which he discarded to bolster his library.

At exactly seven cards, with just the Weapon left in his library, he wouldn't be casting any more spells. Fortunately, he didn't need to. He milled away Rodman's library with ease.