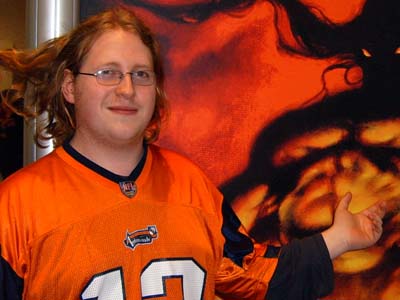 Stuart Wright, so recently doing his 'happy dance' upon having made his first Nationals top eight was not best pleased about having to play Calum Stephenson's very aggressive Zoo build in the quarter-finals of nationals. While his matchup against the deck with his Magnivore build isn't quite as bad as many might suggest, he had much more favourable matchups in the top eight.

Before Game 1, Stuart and Calum extended a little friendly banter about how little chance Stuart stood. Calum gave Wright about 10%. Stuart could only shrug and shuffle up.

For the first game, Stuart's opening seven didn't look good enough. Neither did the six.

'If I drew 3 lands off the top, I still don't think that I'd have won that one.' griped a slightly miserable Stuart.

He dejectedly kept his five, and watched as Calum had a turn one Kird Ape off a Karplusan Forest.

'This really isn't good for me…'

Stuart had lands for the first couple of turns, while Calum restricted himself to just more Kird Apes, and a Lava Spike to the face. His only other land was a Karplusan Forest, so the apes were pretty small. It seemed that Calum had been caught with his hand in the cookie jar.

Stuart used a Pyroclasm to wipe the board, and an Eye of Nowhere and Stone Rain to keep his opponent off his most aggressive start. As Stuart's mana base blossomed, while Calum's simply floundered, it began to appear that Wright might be able to pull something back.

'If you ever draw a Plains, I lose' declared Stuart, sitting on six lands to his opponent's two, without white mana.

It turns out that Stuart was right. Happy dancing ensued.

'The problem with this matchup is that there are 10 cards I want to side out, and only 9 that I want to bring in… I guess I should probably have thought about that' remarked Stuart as he put in the Steamcore Weirds, Threads of Disloyalty and Volcanic Hammers that turned his deck into a more straightforward anti-aggro configuration.

For Game 2, Calum started with 'A real man's Kird Ape', playing it off a Stomping Grounds on turn one. It was followed in short order by a second, and a Seal of Fire.

Stuart started fighting back with some Volcanic Hammers. These took down one of the apes, and indeed a Watchwolf who briefly entered the fray for Calum. Stephenson, who between time studying in Reading works in Eclectic Games, a local games store where got in a lot of testing, dropped a Giant Solifuge and swung. Suddenly Stuart's life was looking a little precarious.

Stuart had a Pyroclasm to kill the hasty insect, and an Eye of Nowhere to hold back an ape for a turn, but still didn't have a second mountain with which to play a Magnivore, despite having done a little digging with Sleight of Hand and Compulsive Research.

Finally, Stuart found his second red source, but it was a Steam Vents that shocked him upon coming into play untapped. The only damage that Calum had taken was from his own lands, but in typical Zoo fashion, this worked out to quite a substantial amount. Stuart played his Magnivore, but was suddenly on just 6 life, with a Seal of Fire on the board.

Calum flashed the four point burn spell, and it was on to game 3, the score 1-1.

It seemed that Calum was gaining momentum following his win in game 2, starting out strong with a Savannah Lions. This did get hit by a Repeal, but came right back, along with a Seal of Fire to keep up the beats.

Stuart answered with a Steamcore Weird, but the Weird soon succumbed to double Seal of Fire, which allowed Giant Solifuge to rumble in.

Stuart untapped, drew, and cursed his luck. He had now way to deal with the 4/1. After taking another beat, Calum rubbed salt in the wound with an end of turn Flames of the Blood Hand, into Lava Spike and Char.

The game did not take long.

For Game 4, there was no extra sideboarding, just an increasingly rapid series of plays. Stuart had a Sleight of Hand on turn one, and a Remand ready for a turn two Watchwolf. The following turn, Calum elected to play a Savannah Lions and Kird Ape rather than the wolf.

This proved to be a good call, as one was hit by Repeal almost immediately. Calum was not to be deterred though. He continued to deploy threats, while Stuart drew cards with Sleight of Hand, growing slightly frustrated at some unfortunate draws on his side of the board.

Once Stuart got down to 10, it was clear to see that Calum had his opponent's final rites all marked out. He played a Lightning Helix at the end of turn, and drew into a Sacred Foundry to allow for more burn on the following turn. As the final burn spell got pointed at Stuarts head, he dropped the cards in his hand on the table, and extended his hand.