Quarterfinals: Take It Down

One of the nice things about being in the Pro Tour Top 8, aside from the nice chairs and tables and enormous checks and legions of fans cheering you on, is that the judges have plenty of whatever token you need. In this match, that meant there was a steady supply of Eldrazi Spawn for Paulo Vitor Damo Da Rosa and Josh Utter-Leyton to play. 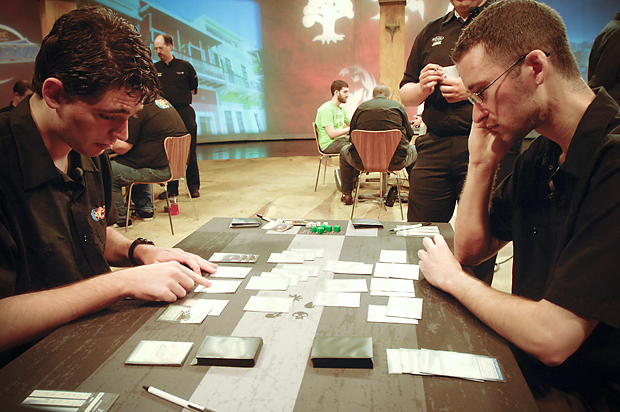 For Paulo Vitor Damo da Rosa and Josh Utter-Leyton, there is only the duel.

Both players are writers for ChannelFireball.com, as their shirts suggest. Josh has been making a splash under the user name Wrapter on Magic Online, and Paulo, of course, has been a force on the Pro Tour for years, with five prior Top 8s on the Pro Tour, and six at Grand Prix events.

Paulo got off to a quick start with a Joraga Treespeaker on his second turn, but Josh had a Growth Spasm for his third turn, so while they were both accelerating, neither was really ahead of the other. Paulo added to his army with an Arrogant Bloodlord, while Josh brought out a Wildheart Invoker.

Now that the initial stages of the game were out of the way, the players allowed themselves to spend some time preparing for the future. Paulo went with a Dreamstone Hedron while Josh used an Ancient Stirrings to get himself where he needed to be.

Paulo cast a Pawn of Ulamog and Josh made his big move for the game, putting Lust for War on Paulo's Joraga Treespeaker. If Paulo couldn't find a way to get rid of either his creature or Josh's enchantment, he'd be taking 3 damage every turn.

The clock had started ticking.

Paulo untapped and thought. He got rid of Josh's Eldrazi Spawn with a Last Kiss and attacked with the Joraga Treespeaker and the Arrogant Bloodlord. Josh declined to block and Paulo went down to 17 from the Lust for War. Paulo added a Dread Drone (and the two Eldrazi Spawn that make up its entourage) to his army.

At this point, Josh was at 14and had a Wildheart Invoker to go with his seven land. Paulo had a Dread Drone, two Eldrazi Spawn, a Pawn of Ulamog, and an Arrogant Bloodlord. And a Joraga Treespeaker with Josh's Lust for War on it.

Josh started to shore up his defenses with a Guard Gomazoa. Paulo cast Vendetta, but Josh responded with an Eel Umbra. The result was that the totem armor ability saved the Guard Gomazoa, but Vendetta still caused Paulo to lose 3 life.

On Paulo's next turn, he tapped the Joraga Treespeaker for mana so it wouldn't have to attack, but he still lost 3 life.

On Paulo's next turn, he cast Essence Feed to get back ahead of Josh on life (Paulo 14 – Josh 11) and a Broodwarden to go with his three Eldrazi Spawn. Then he had to tap the Joraga Treespeaker again.

Josh cast Domestication on Paulo's Pawn of Ulamog and declined to attack, since all his damage was being done on Paulo's turn anyway. Paulo untapped and brought out the mighty Artisan of Kozilek. He attacked with his Broodwarden-enhanced Spawn tokens, knocking Josh down to 6 life. But the Lust for War was still active, and Paulo was down to 8. 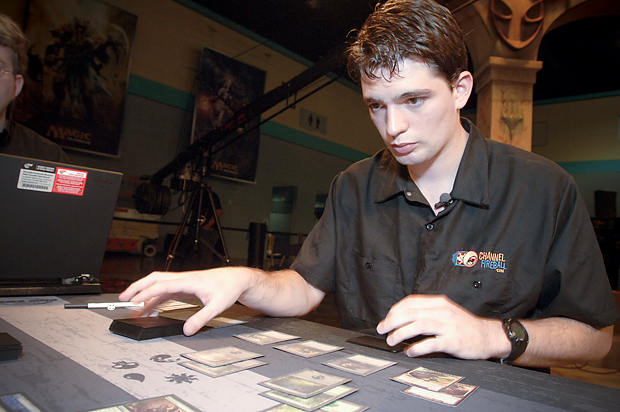 On Paulo's turn, he sent the Artisan of Kozilek in. It annihilated a few lands and killed a helpless Spawn token. The Lust for War pushed Paulo's life down to 1.

In case Paulo was going to come up with something, Josh put a Stomper Cub on the battlefield and passed the turn.

Paulo's last life points went away to Lust for War.

In Game 2, Paulo's first creature was one that would have saved him in Game 1: Bloodthrone Vampire. But he didn't have a lot of creatures to go with it, while Josh was shoring up his defenses early with Guard Gomazoa, Pawn of Ulamog, and Broodwarden before Paulo cast another creature. Once Paulo started, though, he didn't stop. First, he cast Vendetta on Josh's Guard Gomazoa. Then he added a Dread Drone (and its two Eldrazi Spawn sidekicks) and a second Bloodthrone Vampire to the team.

On Josh's turn, he played his own giant monster: Ulamog's Crusher.

After some cogitation, Paulo attacked with Artisan of Kozilek; Arrogant Bloodlord; Arrogant Bloodlord; and Dread Drone. Josh blocked the Artisan with Ulamog's Crusher, the first Bloodlord with Broodwarden, and the other two attackers with Eldrazi Spawn. Paulo used his Invoker to give the Bloodthrone Vampire +5/+5 and trample.

Then nothing happened for a while, both players seemingly deep in thought. After a judge intervened, it turned out that each player was waiting for the other to do something. Once that got sorted out, the roll of the dead included an Arrogant Bloodlord, the Broodwarden, Ulamog's Crusher, and two of Josh's Eldrazi Spawn.

Paulo played a Joraga Treespeaker to go along with his army, which still included Artisan of Kozilek, Bloodthrone Vampire, Wildheart Invoker, and two Eldrazi Spawn. On the other side of the table, Josh was down to a single Eldrazi Spawn, which soon died under the powerful tentacles of the Artisan of Kozilek. That's about when Josh himself died, come to think of it!

In this game, Paulo went with a more direct strategy, cast Null Champion on the second turn, then leveling it up to 4 power and attacking on turn three.

This provided much more early pressure than Josh's deck seemed prepared to handle. When Josh cast Growth Spasm on his third turn, he was already at 16. When he cast a Broodwarden on his fourth turn, he was at 12 and the Broodwarden fell victim to a Vendetta.

On Josh's fifth turn, he was at 8 life and had only an Eldrazi Spawn to his name. The force amassing across the board had, in addition to MVP Null Champion, a mana-producing Joraga Treespeaker and a Pawn of Ulamog. Josh dug into his deck with a Sea Gate Oracle and an Ancient Stirrings.

Paulo's roster swelled yet again with a Dread Drone (and two Eldrazi Spawn backup singers) and he attacked again. And why not? It had worked fine so far. Indeed, it continued to work fine, as the Pawn of Ulamog met the Sea Gate Oracle and the Null Champion knocked Josh down to 4 life.

Josh tried to get an army going by casting Brood Birthing. This was going to give him three Eldrazi Spawn, since he still had the one he got from Growth Spasm back on turn three. But Paulo destroyed the extant Spawn with Last Kiss, so the Brood Birthing was not that productive after all.

In Paulo's next attack, the Null Champion finally got blocked by something. But it was just an Eldrazi Spawn, annd the unblocked Pawn of Ulamog still took Josh down to 2. And his Pawn of Ulamog traded with the Dread Drone, so Josh was out of creatures.

Josh refused to give up, putting Wildheart Invoker onto the battlefield. But Paulo had a Corpsehatch and had no trouble defeating a defenseless Josh.

Paulo got a pair of Bloodthrone Vampires out early, while Josh devoted his time to Guard Gomazoa and Growth Spasm. After that, both players played out many creatures, with Paulo's Null Champion and Dread Drone (and its Eldrazi Spawn posse) facing off against Josh's Sea Gate Oracle and Ulamog's Crusher. 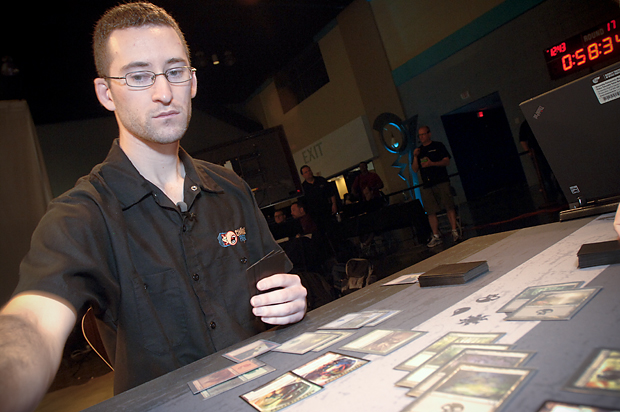 Yes, the 8/8, annihilator 2 monster itself. As required by law, Josh attacked with it, and it took out one of Paulo's Eldrazi Spawn and a land (via annihilator) before trading with Dread Drone, Null Champion, and Bloodthrone Vampire. Paulo had dealt with Ulamog's Crusher, but at a heavy cost. Then he had to sacrifice his surviving Bloodthrone Vampire to itself as a result of Josh's Lust for War.

Josh wasn't done with the big moves. First he cast Gelatinous Genesis to get three 3/3 Ooze tokens (which were helpfully provided by the judges). Then came a new bomb: Eldrazi Conscription.

Now Paulo was facing a 13/13 Ooze with trample and annihilator 2. He scrambled around for a few turns, bringing out a Nirkana Revenant and an Awakening Zone, but in the end, the immense Ooze was just too much to handle.

Then Paulo tapped out for Nirkana Revenant. Josh had a Stomper Cub, but Paulo used Perish the Thought to make sure that Josh wouldn't be surprising him with a Gelatinous Genesis. A Vendetta on the Guard Gomazoa later, Paulo was attacking with a 6/6 Nirkana Revenant 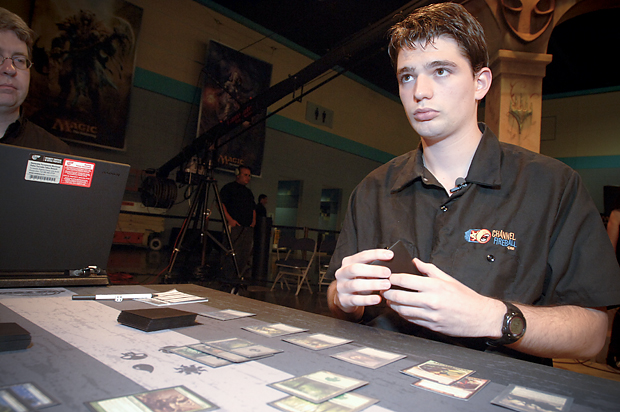 Paulo attacked again with the Nirkana Revenant, which squashed the domesticated Ondu Giant. Then he increased his army with Pawn of Ulamog and Dread Drone (with, of course, its two bodyguard Eldrazi Spawn). On his next attack, Paulo's army was unstoppable.

After the match, Josh had one request for his ChannelFireball compatriot: "Take it down."