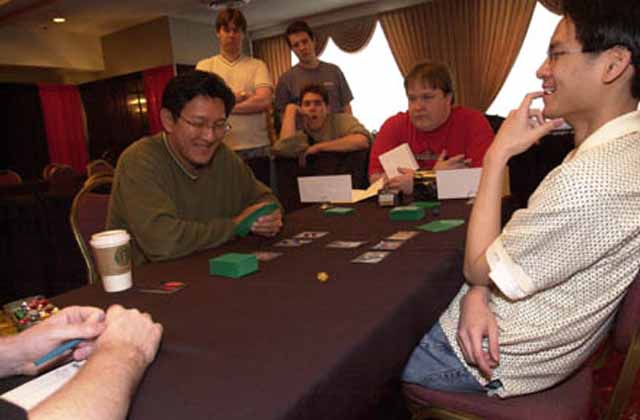 Neither Terry Lau nor Roland Aw had lost a match yet this weekend with their Standard decks. Lau went 5-0-1 yesterday with Tinker to come all the way back from a 1-3 start on day 1. Aw went 3-0-3 with his monoblue control deck. The key to this matchup is Mishra's Helix - if Lau can get it into play (either by casting it or by having a Tinker resolve), then Aw is in trouble. Interestingly, Aw does have more answers than the average monoblue deck since he starts one Temporal Adept and has a second in the sideboard.

After using Rishadan Port to prevent Lau from doing anything on turn 2, Aw cast his one main deck Temporal Adept on turn 3. However, that left him tapped out for Lau's fourth turn. Lau tapped two Saprazzan Skerrys and his Crystal Vein for 5 mana, used that to cast Thran Dynamo, tapped that for Voltaic Key, used the Key once to untap the Dynamo and then Tinkered the Key away to go get a Masticore. That left him with just enough mana left over to shoot the Adept before Aw could untap. Wow. Aw tapped out again on turn 4 for two Grim Monoliths. Aw had Thwart in his hand, but his lands included two islands, a Faerie Conclave, and a Rishadan Port. (Gab Tsang took the Conclaves out of his own monoblue deck so he could maximize the number of islands and make his four Thwarts as good as possible. With only two Thwarts in his deck, Aw ran Conclaves which should give him an advantage in monoblue control mirror matchups.)

With Aw tapped out, Lau let his Masticore go and cast a Phyrexian Processor, paying ten life and then losing both his Skerrys so he could make a guy right away. That seemed like it would end the game, but cast Strike of Genius for 5 and came up with a Powder Keg. That bought him one turn (since Minion tokens have a converted mana cost of zero). On his next turn he used his Monoliths to cast both Morphling and Masticore. Race and chump was his only available plan. Masticore chumped and Morphling flew over for 5. Aw just needed to come up with one more blocker and that's when he drew Treachery off the top of his deck. Lau saw that Treachery bought Aw just enough time to win through the air with Morphling so he tried to cast the Crumbling Sanctuary that he'd been holding for several turns. "Thwart or no?" asked Lau. Thwart. It's not easy to beat turn 4 Processor when you're playing AcceleratedBblue, but Aw pulled it off. 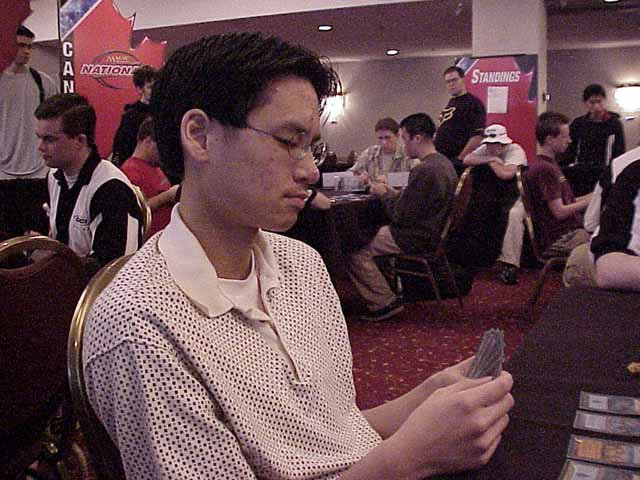 Aw had a Port once again in game 2. On his third turn he chose to use it rather than leave mana untapped. No longer needing to worry about Counterspell, Lau cast Tinker. I'm not sure Lau would have been so bold if there had been two untapped blue mana on the other side so I think Aw should have bluffed Counterspell even though he didn't have one in hand. Tinker brought Mishra's Helix into play and Aw had one last turn with access to more than one mana during his main phase. Adept would have been great and Keg would have been enough, but all he had was Grim Monolith. The Monolith made Lau's life a little more difficult and did allow Aw to get a Powder Keg into play eventually, but Lau's Processor forced Aw to Keg away nothing but a 19/19 Minion token. Lau won by attacking for 20 with one minion and a 1/2 Metalworker.

After the game Roland Aw couldn't stop himself from pointing out that he would have won if only he had drawn his one Rath's Edge. Oops, Lau now knew never to make that mistake again.

Nothing happened in game 3 until Aw played a turn 4 Powder Keg with Counterspell backup. Lau then sent Defense Grid into Counterspell and got Metalworker into play. Lau was probably pretty happy about that trade and looking forward to turn 5, but Aw dashed his hopes by using Treachery to steal the Metalworker. Aw wasn't done yet, though. He kissed the Morphling that was in his hand and then tapped out for it. Lau was able to cast Processor before Aw could untap, but with Keg and Metalworker available to deal with Minions, Morphling had no trouble winning that race. 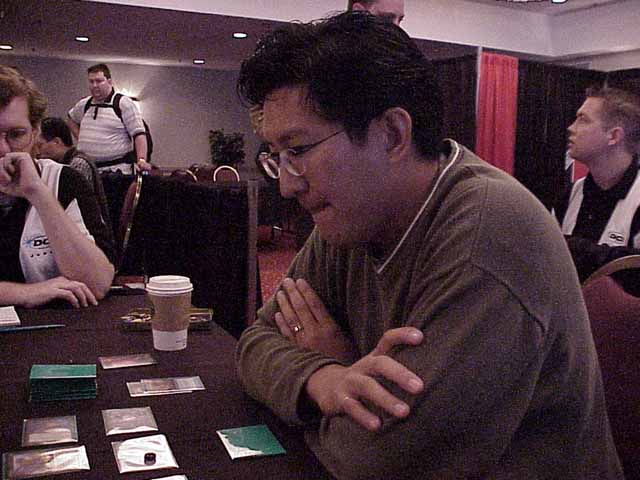 Game 4 began with a Port battle and Aw found himself tapped out on Lau's fourth turn. Lau sacrificed his Crystal Vein so he could play both Thran Dynamo and Tangle Wire. Tangle Wire left Aw with just one untapped Island available to defend himself from Lau's next turn. When Lau cast turn five processor, Aw thought for a long time. He didn't have Annul so he felt obligated to pick up all three of his islands in order to stop the Processor with Thwart. He knew it would take him a while to rebuild his manabase, but is only realistic route to victory was to hope Lau didn't have any more threats in his hand. But Lau did - Lau cast Mishra's Helix on his next turn and that pretty much locked the game up. Next Lau Tinkered the fading Tangle Wire away for aPprocessor and that was that.

So it all came down to one game. Both players did nothing but play land for five turns. Lau then succeeded in casting a Voltaic Key, but Aw wisely countered Grim Monolith. Lau's turn 6 Monolith resolved and gave Lau a large mana advantage. Aw then cycled a Miscalculation and failed to play a land on his sixth turn. Lau understood exactly what was going on and decided to win this blue on blue matchup the old way - by out landing his opponent. Lau had an 11 to 5 mana advantage when he played Thran Dynamo. Even with a 15 to 4 land advantage (thanks to two Rishadan Ports), Lau till didn't make his move. He waited for Aw to either discard, or cast something. After discarding once, Aw eventually decided to risk a Grim Monolith. Two Annuls and a Thwart later, Aw tapped himself out for Temporal Adept. "I think you have Miscalculated," intoned Terry Lau. 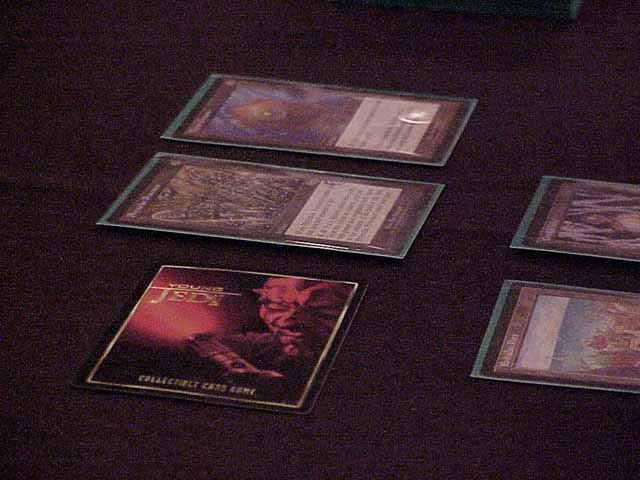 With Aw all tapped out, Lau dropped Defense Grid and then Tinkered for Mishra's Helix. Lau maintained his Helix lock while waiting to draw a damage source. Eventually he did, casting processor (for 10) and finished off a thrilling 3-2 victory. Game 5 was classic, old school Magic. The cards have changed over the years, and Lau's deck doesn't exactly respect the doctrines on card advantage, but having more mana and refusing to blink first is still the way to win blue on blue.

Lau wins 3-2, advances to the semifinals.