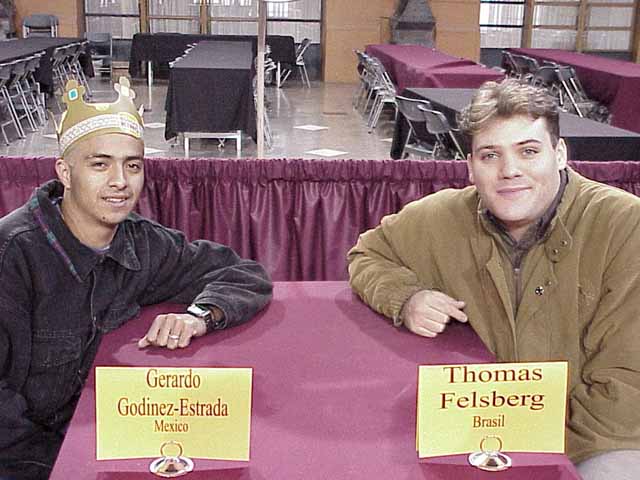 Thomas Felsberg of Sao Paulo, Brazil faced off against Gerardo Godinez-Estrada of Mexico City in the quarterfinals of the Latin America championships. Gerardo was playing a cross-breed between the Angry Hermit and Trinity Green decks, which presented a tough matchup for Thomas's Replenish deck. "I'm not ecstatic about my chances," Thomas admitted. "But I'll try my best."

The first game was a short one. Thomas used a pair of Parallax Tides to shut down Gerardo's lands, and the two enchantments became 4/4 attackers once Opalescence hit the table. Although the Tides faded out quickly, Gerardo's lifespan was even shorter.

Game two was similarly one-sided, as Gerardo was unable to damage or disrupt Thomas in the critical first few turns. Gerardo finally cast a sixth-turn Thran Foundry, but he was one turn too late to prevent a massive Replenish. Defenseless against Thomas's array of attacking enchantments, Gerardo played Creeping Mold on the lone Opalesence-but Thomas had the Counterspell. With only one life point left, Gerardo conceded.

The third game was totally dominated by Gerardo, who utilized Fallow Earth, Plow Under, and Rishadan Port to keep Thomas helpless. On his seventh turn, Gerardo won with an 18/18 Phyrexian Processor token and they were off to game four.

Thomas quickly reasserted himself in the next game, using Cursed Totem to shut down Gerardo's creatures and two Parallax Tides to nullify his lands. Thomas then played Opalescence and began to attack. But table judge Marcelo Diaz failed to notice the Cursed Totem in play as Thomas continued to activate the Parallax Tides. When Gerardo himself finally noticed, head judge Juan del Compare was called in for a ruling. Because the game state had proceeded too far to be backed up, Thomas was issued a game loss for his major procedural error.

Frustrated at having a certain victory snatched away from him, Thomas quickly shuffled up for the fifth and final game. He got off a quick double-Frantic-Search-Replenish on turn four, bring two Opalescence and a Parallax Tide into play. But his beatdown was cut short by a Reverent Silence from Gerardo, who followed up with a 9-life Phyrexian Processor. Luckily, Thomas had the saving Seal of Cleansing in his hand, and both players went into topdeck mode.

Gerardo played a Thran Foundry, keeping an eye on Thomas's enchantment-laden graveyard. Thomas, who had a Replenish in hand, played two Parallax Tides and removed all of Gerardo's land. He was hoping that Gerardo would attack with his only Llanowar Elf, leaving no mana to activate the Foundry. But Gerardo held back and used his Foundry to nullify the game-winning Replenish.

Gerardo then played Argothian Wurm, which would win the game if it ever got a chance to attack. Thomas sacrificed several lands to buy time against the Wurm, but Rofellos was nibbling away at his life total and still he could not find another Replenish. When he was almost out of land, he let the Wurm stay in play and tried to topdeck one of the three Replenishes left in his deck. But he failed, and Gerardo Godinez-Estrada took the match 3-2.