Every single person who seen all Top 8 decks agree on one point, Thomas Gundersen's deck is insane and definitely seems to be the best in the Top 8. Double Infest, Hollow Specter and Visara to name only cards that can win games alone. 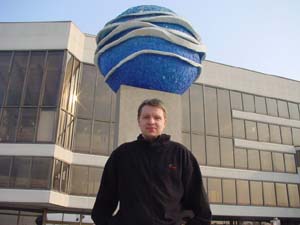 Birner's soldiers deck seems quite good too, but mulligan and mana screw don't seem to help him in first game, as if things were not already complicated enough. When he plays his first creature, Pangolin and the 2W 1/3 cleric were already on the table.

The next turn was Visara, while Birner had only played a morph and Glory Seeker. White Knight was his third and last spell of the game as its protection from white convinced the Gorgon Legend that attacking was the quickest way to win the game.

Not much to do against such an army with ordinary cards, but Gundersen was doing more than defending himself. Wall of hope, Whipgrass Entangler, Pangolin and a couple of Aven Redeemer were making this situation almost a lock. Almost. 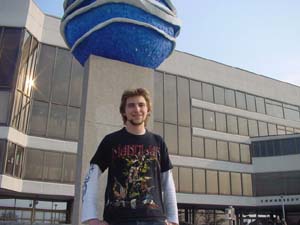 That's when Gundersen decided things had to change that he lost the game. He attacked with Pangolin, and planning to kill the three Daru Cavaliers blocking it Swat one of them. That's all Birner could hope. He cycled Gempalm Avenger and killed his opponent's biggest creature.

"You played well and I didn't", probably referring to the pangolin suicide that cost him the second game.

For once both players decided to play spells during the first turns of the game, but Gundersen decided to Infest the table, letting only Prowling Pangolin and Wall of Hope on his side of the table and "Little Visara" Catapult Master on the other. Just on time, the fifth soldier would have come on next turn.

The rest of the game was the Austrian trying to avoid the inevitable, with Goblin goon trying to race Riptide Replicator (2/2 clerics), but Defender of ... killed the resisting soldiers on a last attack.

Gundersen will play the semifinals with quite good hope for victory. Birner will console himself thinking about his qualification for Yokohama, which will be his first Pro Tour.