Fellow Top 8 competitor Nicolai Herzog may be the only player alive with back-to-back Limited Pro Tour victories, but Madison, Wisconsin native Mike Hron hopes he can change that. Behind his cool eyes and detached demeanor lurks a competitive fire that has launched him from perennial PTQ standout to one of the game's Limited masterminds.

As alluring as another trophy might look on Hron's mantelpiece—and as comfortable as another $40,000 might feel in his bank account—he must first advance past his quarterfinal opponent, Mario Pascoli. This may be Pascoli's first Pro Tour Top 8 appearance, but he's no stranger to the stress, rigor, and intellectual endurance that competition under Sunday's lights demands. A high-powered lawyer in his native Italy, Pascoli boasts a National Championship and multiple Grand Prix Top 8 appearances to his name.

Both players are packing red decks, with Pascoli's geared more toward Elementals. During the draft Hron appeared to be prioritizing Giants highly, with three Blind-Spots and a late Brion Stoutarm, but it remains to be seen how his deck materialized during construction.

With his Vivid lands, reinforce creatures, and a certain enigmatic blue-aligned planeswalker, Hron wanted to save himself the trouble of scrounging for counters before the match. He caught the attention of magicthegathering.com web site manager Scott Johns.

"When you need some counters, let me know," Scott said.

"I need some counters," quipped Hron immediately. A judge eventually returned with a handful of clear red beads, and Game 1 was underway. 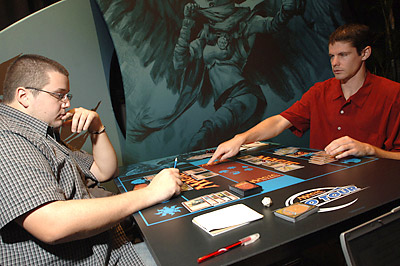 Mario Pascoli and Mike Hron vie for a chance at the Semifinals. Pascoli won the die roll and led off with a turn-two Sunflare Shaman, while Hron set to work on his mountain of glass trinkets with a Vivid Crag. Hron's turn-two Fire-Belly Changeling was met with a twin from Pascoli, who elected not to trade his flamekin for the cute clear blue lizard. Jace Beleren hit the table on Hron's side as the creatures stared one another down, and Hron elected to draw a card immediately rather than risk a two-for-one should his Changeling bite the dust.

On Pascoli's turn, he decided to up the changeling ante with a Changeling Berserker, upgrading his salamander into a bloodthirsty, raging hulk. The Berserker and the Sunflare Shaman crashed into the red zone, attacking Jace, and the planeswalker hit the bin before it could net Hron any more cards. Hron simply answered with a Stonybrook Angler and passed the turn, leaving two Mountains open to trade his Fire-Belly for the Berserker should he get the opportunity. Pascoli played a Swamp and attacked with the Shaman, and Hron happily traded his changeling while he had the opportunity. For the moment Pascoli appeared to be out of gas, and he handed the reins back to Hron.

As Hron drew his card he paused for a moment in thought. Although the board position appeared to be very simple—at least for the moment—both players had full grips and were trying to anticipate one another's instants. Hron finally elected to simply play a Mountain and pass the turn. Pascoli attempted to Eyeblight's Ending the Angler on the end step, but Hron countered it with a little help from the Treefolk-lifting Wings of Velis Vel. All of the sudden that Angler looked an awful lot like an Elf, and the poor elvish winnowers simply had no idea which eyeblight's life to end!

Pascoli shook his head, his plans foiled for the moment, and untapped his lands. The Angler, once again fully resembling a Merfolk, tapped the Changeling, and Pascoli was forced to simply pass the turn.

Hron leaned forward in his chair as the momentum seemed to shift his way. He attacked for a point with the Angler, drawing first blood, and played a Pyroclast Consul. Pascoli's attack left Hron happy to trade, and still Pascoli had nothing but the formerly championed Fire-Belly Changeling. Hron deployed a Sage of Fables and a Smokebraider to the table, firmly in control. Pascoli debated for awhile about whether to attack with the changeling, but eventually settled on a Goatnapper, who was left entirely devoid of Goats to nap. The Goatnapper was tapped by the Angler on Pascoli's end step, but Hron's draw step apparently yielded nothing and he passed the turn yet again.

On Pascoli's attack step, Hron taps the Fire-Belly Changeling—a change from the turn before. Pascoli cracks in with the Goatnapper, only to see it blocked by the Sage. With damage on the stack Hron reinforced his Sage with a Brighthearth Banneret, and suddenly he was in possession of a viable attacker and an extra card, should he ever need it. Pascoli played a Flamekin Harbinger and searched up a War-Spike Changeling.

"I was looking for those!" Hron said, as the changeling went to the top.

While the potential blocker sat useless atop Pascoli's library, Hron decided to crank up the offense. He attacked with his now 3/3 Sage and enhanced his board with a Smokebraider and a Flamekin Spitfire. Pascoli played the War-Spike Changeling, which Hron tapped, and simply passed the turn with a pair of 1-toughness creatures on the board.

Hron sat firmly in the driver's seat as he untapped with his Spitfire. An attack from Smokebraider and Sage put Pascoli at 12, and Hron set to work on Pascoli's creatures—careful not to over-commit his mana lest he lose his Sage without first being able to draw a card. A pair of attacks from Hron, coupled with a shot from the Spitfire, left Pascoli at 6 with his back up against the wall. With nothing on the table but a War-Spike Changeling, Pascoli drew his card.

Pascoli's eyes scanned Hron's board. Hron had played his twelfth land in order to shoot Pascoli three times, and so was left with an empty hand. Hron's eyes betrayed nothing but focus and patience as Pascoli considered his options.

Calmly, Pascoli tapped five lands and slammed a Thundercloud Shaman onto the table, which, if unperturbed, would kill every member of Hron's team except for the reinforced Sage. 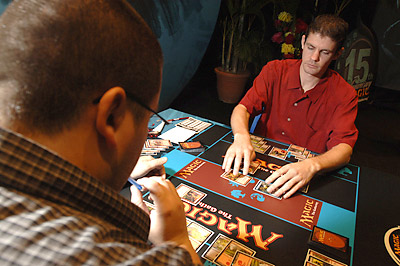 Hron's usually quiet demeanor gets even quieter. Hron's choice to lay down his twelfth land rather than hold it back to bluff seemed vindicated. He attempted to shoot Pascoli's War-Spike Changeling three times—only to have it reinforced by Pascoli's own Brighthearth Banneret!

Hron's eyes widened in disbelief. After putting his team in the bin, he drew his card for the turn and a card from the Sage, and was forced to simply pass. Pascoli's attack forced Hron to Whirlpool Whelm the changeling in order to save damage and remove the +1/+1 counter. The clash revealed an Inner-Flame Acolyte on Hron's side—and Pascoli's own planeswalker, Chandra Nalaar, on his! Hron shipped the Acolyte to the bottom while Pascoli, to no one's surprise, decided that the fiery-tempered renegade pyromancer probably ought to stay on top. As Pascoli re-played his War-Spike Changeling, Hron drew yet another land, and the planeswalker made the rest academic.

"You win," Hron said, as he scooped up his cards for Game 2.

Hron started again with a Mountain, while Pascoli burst quickly out of the gates with a turn-one Flamekin Harbinger for Changeling Berserker. Hron's turn-two Brighthearth Banneret caused Pascoli to Release the Ants, with the clash revealing a Flamekin Spitfire for Hron and a Mountain for Pascoli. Both players decided to keep their cards on top. Hron's Spitfire was answered by an Inner-flame Acolyte from Pascoli, which (along with his Harbinger) took Pascoli down to 14.

Hron grimaced as he played a turn-four Vivid Crag, knowing that he would have to wait a turn before shooting down Pascoli's Harbinger. He summoned a Rage Forger and attacked with the Spitfire for 2, taking Pascoli to 17. The Berserker came down on Pascoli's side unabated, and championed the Harbinger that Hron desperately hoped to shoot the turn before. Hron blocked Pascoli's Inner-flame Acolyte with his Rage Forger and fell to nine.

On his turn, all Hron could muster was a Fire-Belly Changeling that fell to Pascoli's Tarfire. Pascoli smashed Hron down to 4 with his Berserker, and a Seething Pathblazer on Pascoli's side only worsened Hron's lack of action. Five minutes after the start of Game 2, Pascoli led the match 2-0.

As the players shuffled up for Game 3, Hron betrayed a rare change of form. He leaned forward in his chair, riffled his deck vigorously, pierced his opponent with a clinching stare. His chances of a repeat quickly eroding, Hron's typical laid-back attitude and wry wit faded to cold, mechanical calculation. He remained eerily silent, fixed his eyes straight ahead, and looked away only to make sure he didn't catch a glimpse of Pascoli's cards as he shuffled.

Hron elected to play. Both players kept their hands. 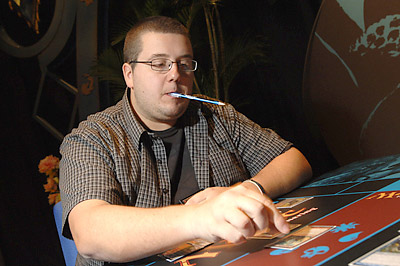 Pascoli chews on his options. "]Nothing hit the table but lands until Hron broke ground with a Blind-Spot Giant. Pascoli answered with a Seething Pathblazer, but Hron confidently announced another Blind-Spot and crashed for 4. Pascoli's Eyeblight's Ending left the Blind-Spot Giant stranded yet again, and the Pathblazer got in for 2. Undeterred, Hron's stream of Giants continued with a Fire-Belly Changeling, but Pascoli halted its momentum with a Shard Volley on the Blind-Spot Giant before Hron's attack step. It seemed that Hron was out of action—or, at the very least, out of Giants—and he could only add a Brighthearth Banneret to his side before passing the turn.

Pascoli grinned as he played, for the third time in as many games, a Changeling Berserker. It took Hron down to 13, and Pascoli passed the turn. Hron turned on his Blind-spot yet again with a Lowland Oaf, and an attack from the Giant and the Banneret made the game look like a race.

It turns out, though, that Chandra Nalaar is pretty good at winning races. As she hit the table on Pascoli's side, Hron groaned audibly, watching his chances of victory evaporate in front of him. Pascoli shot the Lowland Oaf for 4 to dodge a potential Wings of Velis Vel, and again battled for 5 points of damage. The life totals stood at 8 to 11 in favor of Pascoli.

On Hron's turn he buried himself in deep thought. A mistake here would surely cost him the match, and even with perfect play the situation did not look good. At length he played a Wings of Velis Vel on his Brighthearth Banneret and attacked—not Chandra, but Pascoli! This dropped Pascoli to 3, and Pascoli grimaced in anticipation of the Shard Volley. It never came, however, and Hron passed the turn with four red mana untapped. An attack from Pascoli dropped Hron to 3, and a Flamekin Harbinger for Inner-flame Acolyte sealed the game. Hron drew his card, saw no answers, and that was the match.