Quarterfinals: Tim He vs. Andrew Gordon

Tim He is a local from Sydney, he made top 16 at GP Melbourne last year but this is his best result at a major event. Tim drafted a mostly white deck that splashes for 4 black cards, Barter in Blood, Flayed Nim, Consume Spirit and Irradiate.

Andrew Gordon is from Melbourne and is a member of Team Card Heaven, who has been dominating MTG in Australia. Andrew made the national team in 2001. Andrew's deck is a Blue/Black with lots of Affinity cards and artifacts.

Tim won the dice roll and started to shuffle his 7 card hand, after thinking for a bit and taking a deep sigh he sent his 7 cards back to his deck, and drew another 6.

Andrew also did the same, his 6 cards had 2 lands and a Myr. Tim wasn't so lucky and stalled at one land for several turns only being able to play a Leonin Scimitar and a Slagwurm Armor. Andrew played a turn 3 Nim Shrieker that was a 2/1. Next turn Andrew played another Myr and attacked with his 3/1 flyer and his 1/1 Myr. Tim finally drew another land on his fifth turn but didn't have anything to play and passed the turn. 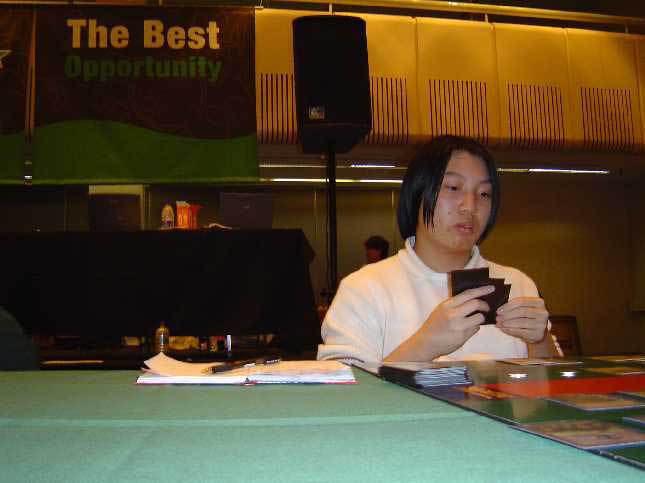 After looking at the board for a while Andrew decided to only attack with his 3/1 Shrieker. At the end of the turn Tim played a Raise the Alarm. Tim attacked with his tokens and then plays an Auriok Bladewarden and equipped it with his Leonin Scimitar.

Andrew attacked yet again with his 3/1 shrieker putting Tim at 10 life.

Tim added to his army with a Flayed Nim and attacked with 2 tokens pumping them with his Bladewarden to put Andrew at 14.

Andrew played another flyer, A Somber Hoverguard and passed back the turn to Tim.

Tim swung in for 6 damage and ended his turn. Tim Irradiated the Hoverguard during Andrew's next attack and took 4 from the Shrieker and a Myr, ending the turn at 6 life.

Tim played out a Fireshrieker and equipped it on his Flayed Nim which would of done lethal damage if Andrew didn't have a Betrayal of Flesh to win the game.

Tim sideboarded in a Wail of the Nim to deal with Andrew's numerous one toughness creatures. Andrew brought in a Wanderguard Sentry and took out a Disciple of the Vault.

Tim started off game 2 with another mulligan and drew yet another one land hand. Tim was able to draw a land on his 3rd turn and play out his Leonin Skyhunter. Andrew could only respond with a 3rd turn Silver Myr, to power out his next turn Wanderguard Sentry. Tim revealed an Irradiate, Flayed Nim, Leonin Abunas and a Raise the Alarm, which got played at the end of the turn. 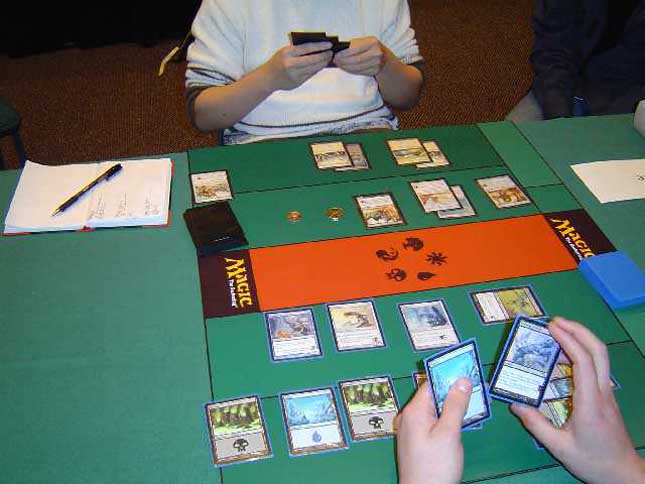 Tim peeled a land off the top and played out his Abunas. Andrew played out a three casting cost Thoughtcast on his turn, drawing a Welding Jar and a Somber Hoverguard, which he then played.

Tim kept up his offence and swung in the air with his skyhunter. Tim played a Flayed Nim and ended his turn.

Andrew got in his first attack with his Hovergaurd, bringing Tim down to 17. Andrew added to his air force by playing out his Rust Elemental.

Tim swung with his Nim keeping up the offence and leaving his Skyhunter back to block. Tim ended the turn after he played a Bladewarden.

Andrew had a terror for the Skyhunter and sent in his team of flyers for 7 damage to bring the Tim down to 10 life.

Having no way to race or deal with Andrew's flyers Tim exended the hand and wished Andrew the best of luck in the semi finals.