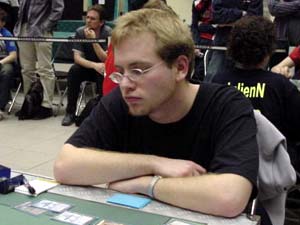 quarterfinal is a matchup between 2 lesser-known Germans. Tobias brought a version of Ravager-Affinity to the table and Xuan-Phi is playing a standard Goblin deck. Before they could start playing, the table judge checked their sleeves and noticed that Tobias's had color differences. He had to resleeve. After putting thirty-or-so cards in new orange sleeves, he realized that he didn't have 60 sleeves of that color. A new pack of sleeves was found that actually held a sufficient amount, and after resleeving again the players were finally ready to go.

Tobias won the die roll and elected to play first. He started the game with Great Furnace and Skullclamp, while Xuan-Phi had Skirk Prospector on his first turn. On the next turns Tobias drew some cards with Thoughtcast and Thirst for Knowledge.
He also had an Electrostatic Bolt for Xuan-Phi's Sparksmith and summoned a Frogmite. Next up were Arcbound Ravager and Arcbound Worker, which got Clamped.

In the meanwhile, Xuan-Phi accelerated into turn 4 Siege-gang Commander on the verge of Goblin Warchief, but didn't dare to attack into Tobias' bigger creatures.
On turn 5 the second Arcbound Worker was clamped, and Skullclamp number 2 hit play. Frogmite got clamped twice to give Tobias 4 new cards. He ended the turn with a new Frogmite and equipped it.

Xuan-Pi had Goblin Sharpshooter on his turn, putting him in a good position to win the game. His board now was Skirk Prospector, Goblin Warchief, Siege-Gang Commander, 3 little 1/1 green men and Goblin Sharpshooter. Tobias was still on 19 life and had a 3/3 Arcbound Ravager, Frogmite and Skullclamps in play. Xuan-Phi thought about the situation for a while and then decided on a play. He shot the 3/1 equipped Frogmite with his Sharphooter, then swung with all of his men except the Sharpshooter. Tobias blocked Goblin Warchief with his Ravager. Xuan-Phi put combat damage on the stack and used his Siege-gang Commander to sacrifice his dying Warchief to deal 2 damage to Tobias, putting him down to 11 life. Tobias then pointed out that the Sharpshooter suddenly had summoning sickness since the Warchief wasn't around anymore.

Tobias took his turn and did the math. He eventually figured it out and played Disciple of the Vault and Shrapnel Blast, then sacrificed all of his remaining permanents to Arcbound Ravager to deal enough damage to kill his opponent.

At this time all other quarterfinal matches had already ended, but mostly thanks to the troubles with the sleeves at the beginning of this match, just one game was finished here.

Both players had a slow draw this game since neither of them had a one drop. Xuan-Phi used Naturalize to destroy Tobias' first land, expecting to slow his opponent down this way. But he surely didn't expect what was about to happen. Tobias turn 2 was sheer mastery: Seat of the Synod, Chome Mox, Chrome Mox, Chrome Mox, imprinting none of them! With 4 artifacts in play now, he played Thoughtcast. The card advantage you gain from Thoughtcast surely doesn't look so appealing anymore if you had to invest 3 cards to be able to play it.

Xuan-Phi played Goblin Sharpshooter on turn 3. Tobias had Arcbound Ravager and quickly sacrificed one of his Moxen to make sure his Ravager wasn't going to be easily killed by the Sharpshooter. Xuan-Phi had no turn 4 play, and Tobias started to fear his opponent might have a grip full of Siege-Gang Commanders.

Tobias had Electrostatic Bolt for the Sharpshooter, and Xuan-Phi responded with a Bolt of himself. Ravager and Shooter hit the graveyard, and a new Ravager saw play.
Xuan-Phi had the obvious Siege-gang Commander on his fifth turn. 2 Arcbound Worker joined Tobias' team next turn and the Ravager swung for 1. Xuan-Phi swung with all of his Goblin tokens and used Naturalize to destroy Tobias' Great Furnace. Since that was Tobias' only source of red mana, Xuan-Phi probably feared red cards.
Tobias had Thirst for Knowledge next turn and discarded Arcbound Ravager. Xuan-Phi sighed because it is in indication of strength when Arcbound Ravager is the worst card in your hand. Tobias swung again with the Ravager and didn't sacrifice any Chrome Moxen to his Ravager for the second turn in a row. He realized he forgot but could only shake his head and laugh about his mistake.

Xuan-Phi attacked with all his creatures, now including Siege-gang Commander himself. It got double blocked by the Workers, and with damage on the stack he sacrificed it to the dome. It was obvious he held some removal for the now huge Arcbound Ravager, since otherwise he wouldn't have let his Siege-gang die that easily. He showed Naturalize. With his Arcbound Workers gone, the +1/+1 counters were lost forever.

Tobias played Pyroclasm to clear the board and then had Electrostatic Bolt for the Goblin Warchief Xuan-Phi topdecked. The players were now in a topdecking race. Another Goblin Warchief and Goblin Sledder were on the top of Xuan-Phi's deck, while Tobias had run out of gas. He didn't have anything to deal with the little green men and quickly succumbed to them.

Tobias played first and had Arcbound Ravager on turn 2. Xuan-Phi had Goblin Sledder, which fearlessly attacked into the Ravager but was left unblocked. Sparksmith improved his board. Tobias drew cards with Thoughtcast and made a Skullclamp. He looked at the Smith and realized that it was for the best to Clamp his Ravager to draw 2 cards.

Xuan-Phi now had to play around Pyroclasm, because had Tobias already drawn lots of cards and there was a good chance he held it. He decided to attack with his creatures and played Goblin Sharpshooter. Tobias drew more cards with Thoughtcast and played Pyroclasm to get rid of all those damage-shooting men. Xuan-Phi saved Sparksmith with Goblin Sledder, and played a new Sharpshooter on his next turn. Thoughtcast number 3 gave Tobias more options, and another Pyroclasm got rid of Xuan-Phi's board. Arcbound Worker was up next, and it quickly got Clamped for more cards. 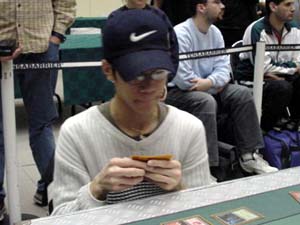 Xuan-Phi played Siege-gang Commander and leaned back into his seat as he passed the turn. Being tapped out, there was nothing he could do about whatever Tobias would come up with.

Tobias used Thirst for Knowledge to draw even more cards and used Electrostatic Bolt to take care of the Siege-Gang. Xuan-Phi attacked on his turn, had no other play and passed the turn. Tobias now thought for a while to figure out what Xuan-Phi could have in his hand. Eventually he played Arcbound Worker and tried to equip it with his Skullclamp. It was met by Naturalize in response. Tobias had another Skullclamp though, and tried to equip again. He saved it from another Naturalize with his Welding Jar. Xuan-Phi's hand was empty now so it was his three 1/1 Goblins against Tobias's full grip and Skullclamp action. Xuan-Phi drew a useless card and just passed the turn, probably expecting to lose next turn. He did. Two Disciple of the Vault and lots of sacrificing later, Tobias had dealt enough damage to advance to the semi-finals.