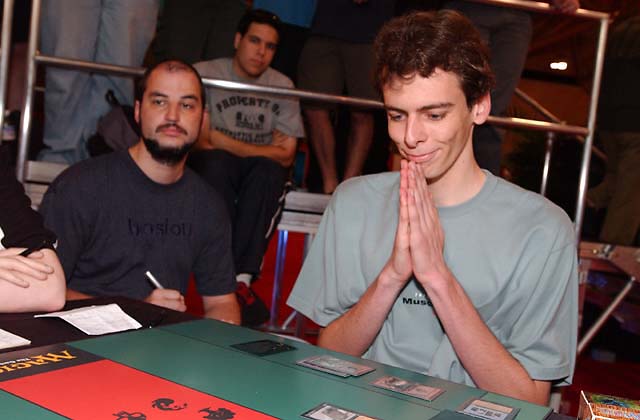 Tom Van de Logt (Netherlands) is used to this environment, having been in the Top 8 at Worlds in Brussels last year. He also won Grand Prix-Copenhagen a few years ago, and is regularly one of the top competitors in Europe and worldwide. He was playing black-red disruption and burn (and nothing machine-like with a head).

David Williams enjoyed his first Pro Tour Top 8 at Tokyo this season; he is a well-known emerging talent from Texas. He was playing a green-blue, Saproling-Opposition deck. (For those just joining us, this uses Saproling Cluster and Spontaneous Generation to build up saprolings, then plops down Opposition to lock the board, and perhaps Coat of Arms to swing big if necessary.)

The first four games ended up being moot; but for those of you who want to see the broad strokes of strategy play out, here are quick summaries:

Van de Logt mulliganed, then played a first-turn Dark Ritual and Plague Spitter. After enough swings, and a Rage and Skizzik to speed things up, Van de Logt pushed through for the win.

An extraordinarily exciting game, it started during Tom's mulligan, when Ed Fear (who, as his shirt stated, is a card-carrying member of the David Williams Fan Club) arrived and asked Williams from the spectator riser how the first game had gone. When Dave explained, Ed's eyes went wide. "NO!" he cried. "NO Plague Spitter!" And he turned around, revealing identical text on the back of his shirt. (Additional shirts are available through Ed Fear Industries, phone number and address withheld.) 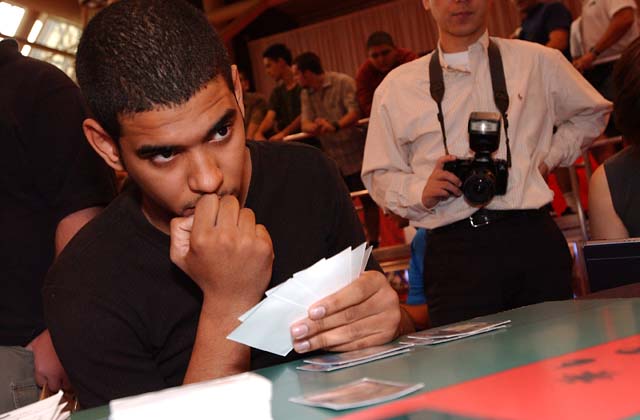 Despite these exhortations, Tom again played a first turn Ritual, Spitter. (There were shouts of despair from Fear's corner.) The first few turns looked like a repeat performance, until Williams slowly began to apply the lock with Saproling Cluster (which kept the Spitter from attacking), Rushing River, Opposition, and Jungle Barrier. After the Spitter was returned to his hand, the Dutchman decided to take advantage of the Cluster's symmetry, and made enough tokens to punch through and get his opponent down to 1. Seeing only two cards in the American's hand (because of Williams's emergency Saproling Generation), he laid down a Plague Spitter, and said go.

On the next turn, Williams topdecked Coat of Arms and slammed it down, to great cheers, and swung (given the ten saprolings on the board) to put his opponent to about -50. Insightful judge Paul Barclay decided that was enough for the win.

Far less exciting, this game saw no first-turn Spitter. Instead, Van de Logt got stuck at two mana for six turns, and conceded when Williams played Opposition, and then Spontaneous Generation with five or six cards in hand.

For the third time in four games, Van de Logt found a first-turn Ritual and Spitter play. The pinging continued through a Jungle Barrier and Saproling Cluster. Van de Logt supplemented the slow kill with a great deal of discard, including Addle, Duress, and Persecute. When he was able to play Phyrexian Scuta (without kicker, to stay ahead on life) and Skizzik on successive turns - and then a second Spitter - not even Williams's Jungle Barrier could stop the pain. He made a couple of chump-blocking tokens, and then conceded on his tenth turn.

This game never got off the ground as a judge swooped in for a deck check. (All decks for all quarterfinalists also had been checked prior to the start of play today.) A few minutes later, another judge came and asked Williams to accompany him somewhere private.

And then everyone waited.

Finally, after awhile, Head Judge Mike Donais returned to the area. (Williams did not come back; a friend collected his things for him.) Donais announced that Williams had been disqualified from the World Championships without prize for deck manipulation. For more information, refer to the featured article on the situation.