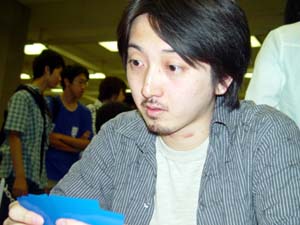 Yokosuka put together his Standard deck on Friday morning, simply throwing together a strategy that he thought would best handle Affinity. Apparently it worked well for Yokosuka, who has a Pro Tour Top 8 to his credit. Odds are he's happy with his first round pairing, since he's up against Kenji Tsumura's Affinity deck.

Tsumura started with Arcbound Worker. It was joined by a Ravager, followed by a free Frogmite. In response, Yokosuka Naturalized the Ravager, and Tsumura didn't give its counter to the Worker. He played another free Frogmite, and ended his turn. Yokosuka played a Silver Knight, and Tsumura put Skullclamp on the Worker to draw two cards, and make a Frogmite bigger. The other Frogmite took the Skullclamp, and bith attacked past Yokosuka's Knight to deal six damage. Yokosuka played a second Knight, and Tsumura played a Ravager. He sacrificed the Clamped Frogmite to draw two cards, then switched the Skullclamp to the other Frogmite. Yokosuka cycled Renewed Faith on end step, untapped, and played Solemn Simulacrum. Tsumura summoned Disciple of the Vault, and got to work sacrificing Clamped creatures to the Ravager. He played two Myr Enforcers for free, and sent his 3/3 Ravager in for an attack- Yokosuka simply chump blocked with a Knight. Tsumura then played Pyrite Spellbomb, and ended his turn. Yokosuka's Viridian Shaman caused Tsumura to lose his Welding Jar, and on the following turn he had enough artifacts to sacrifice to end the game.

Tsumura played a second turn Ravager, and a third turn Frogmite. He missed his third land drop, however, although Yokosuka was doing nothing more than playing lands and saying go. Tsumura played a Skullclamp and tried to give it to the Frogmite, but in response Yokosuka destroyed it with Purge. When Tsumura tried the same play once more on the following turn, Yokosuka had the Purge again. Tsumura drew some more cards with Thoughtcast, and sent his Ravager in for an attack- it died to Wing Shards, and suddenly it seemed that Yokosuka would take control of the game. Tsumura's Disciple of the Vault died to Wrath of God, and Tsumura played Welding Jar, a second Skullclamp, and Myr Enforcer. Yokosuka had a third Purge to kill the 4/4, and Tsumura played Somber Hoverguard. Tsumura gave it the Skullclamp, and when it attacked, Yokosuka Oxidized the Skullclamp, then cast Wing Shards.

Despite all this, Tsumura was still charging on offense, playing two Disciple of the Vault and Somber Hoverguard. Yokosuka cast Pulse of the Fields on end step, but Tsumura cast Shrapnel Blast in response to make sure he didn't get it back. Yokosuka cast Wrath of God, and Tsumura drew two cards off Skullclamp. He untapped, played Somber Hoverguard, and gave it the Skullclamp. He then played Arcbound Ravager followed by a second Skullclamp, and Yokosuka cycled Krosan Tusker to get an island. Viridian Shaman drew a Welding Jar sacrifice, and Tsumura gained more resources with another Thoughtcast. The Hoverguard attacked for five, and Tsumura put the other Skullclamp on it to draw tons of cards. A turn later, Yokosuka conceded.

Yokosuka decided to draw first. Tsumura played a first turn Chromatic Sphere, then a Disciple, Frogmite and Welding Jar on turn two. Tsumura played a Skullclamp and tried to put it on his Frogmite, drawing a Purge out of Yokosuka. Naturally, Tsumura let it die, keeping the Welding Jar to protect the Skullclamp. A second Purge killed the Disciple, but Tsumura simply played another. Tsumura played another Frogmite and gave it the Skullclamp, then played one more Skullclamp. With only two lands Tsumura wasn't able to make the best of this situation by drawing cards off the Frogmite immediately, but he was certainly gaining a lot of momentum despite his lack of mana. The Frogmite attacked, and Yokosuka Oxidized the Skullclamp. Tsumura didn't sacrifice his Welding Jar, and instead put the other Clamp on it after the attack was over. Yokosuka cast Wrath of God, and Tsumura played Shrapnel Blast in response, sacrificing his Frogmite. He drew two cards in the process, and played a Somber Hoverguard on his turn via Chromatic Sphere. Tsumura had only three lands, and none of them produced blue mana. 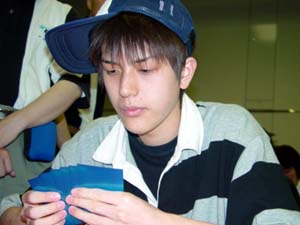 The Hoverguard took the Skullclamp, and when it attacked, Yokosuka had Wing Shards. Tsumura came right back with a Myr Enforcer, along with another Skullclamp. He had a second Welding Jar, and when Yokosuka attempted disruption via Naturalize he gladly sacrificed it. The Enforcer took both Skullclamps and attacked for six, while Tsumura had a Ravager out as well. Wrath of God cleared the board, but gave Tsumura plenty of cards in the process. He played a Hoverguard off a Sphere, followed by a Frogmite. Tsumura continued to bring out threats, and when Yokosuka tried to stay in the game with Pulse of the Fields, Tsumura cast Shrapnel Blast in response to advance to the Semifinals.