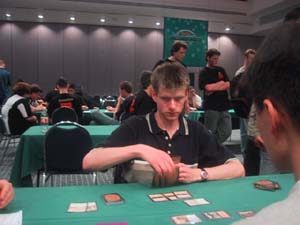 Milton drafted a solid W/B deck featuring Akroma's Vengeance, Tristan had drafted a seemingly W/R deck but ended up with so much lot white including Jareth and Aven Brigadier that he played mono white.

Milton started fast with a turn 2 Wretched Anurid backed up with a morph. Tristan countered with a turn 2 Whipcorder enchanted with Crown of Awe. Milton stayed the aggressor with a Screeching Buzzard despite his Anurid suffering from Sandskin. A crucial play came when Milton's morph enchanted with Crown of Suspicion was blocked by Tristan's Daunting Defender. Milton morphed up a Daru Lancer, crushing the defender. Tristan untapped and dropped his bomb, Jareth. Milton, after attacking and putting Tristan to 5, cast HIS bomb, Akroma's Vengeance, clearing the board. Tristan was out of gas, while Milton Aphetto Dredging-ed up a Nantuko Husk and the Anurid and casting a Whipcorder. Tristan's medic wasn't enough and he conceded. 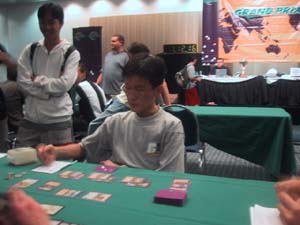 Tristan played first, but once again Milton was the aggressor with Glory Seeker, Battlefield Medic and Screeching Buzzard. Tristan made two Gustcloak Harriers but could not block due to the medic and was forced to race. Milton kept up the pressure with Boneknitter and a morph, while Tristan used Pearlspear Courier to make his harrier a Serra Angel. Milton seemed to have the edge when Tristan blocked his Glory Seeker with the 4/4 harrier. Milton let the seeker die and then cast Crown of Suspicion on the Pearlspear Courier, killing it and reducing the harrier back to 2/2, which then also died. Tristan was outnumbered and low on life, but refused to yield and kept racing with the harrier while making a Grassland Crusader. Milton's buzzard and a newly cast Severed Legion put Tristan on 3 life, while Milton was on 8 from the harrier. Tristan was facing almost certain death next turn. He untapped and attacked with harrier, pumping it with the crusader, Piety Charming it and casting Inspirit on it to deal exactly 8 damage to Milton for the kill.

Milton played but started slower with a Severed Legion and morph. Tristan looked in good shape with Whipcorder, Harrier and Pearlspear Courier. Milton stalled on three land and cast a wretched Anurid and Shepherd of Rot, after having the legion killed by a Unified Strike. Milton was taking some serious damage from a 4/4 harrier and his own Anurid. Tristan was in a comfortable position, choosing to take three from the Anurid each turn rather than blocking with his 4/4 harrier. When Milton's Profane Prayers on the courier was countered by Tristan's Piety Charm, the game was nearing its end as Milton was forced to start chump blocking with the shepherd. Milton died on five land with Akroma's Vengeance in hand when Tristan tapped Milton's Screeching Buzzard and fly in for the win with the 4/4 Gustcloak Harrier.