Fujita, Japan's marquee player, has been riding high this tournament. His version of the Goblin Bidding deck, first seen piloted at the European Championships last week, has carried him and the two other Japanese players who ran it to the Top 8. It is notable when a new deck type places one player into the final rounds of a major event, but unheard of for one to bring success to every single player who runs it. 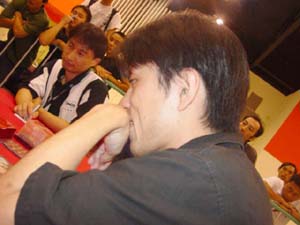 Tsuyoshi FujitaNoppadol's deck isn't unexpected - Mirari's Wake has been a tier one deck in Standard for months now - but he is. Having played for two years, this is his first major event beyond the Thai National Championships. Two years ago he made the top 8 of that event, and he has proven today that he can play with the pros.

These two players met in the swiss rounds, where Fujita pulled off a spectacular Patriarch's Bidding to steal what seemed like a sure win for Noppadol. Fujita feels that the match up is close, so it should be an interesting match.

Fujita won the coin flip to go first, and both players kept their initial hands to start. Fujita leads with a Goblin Sledder, while Noppadol has the classic Wake start of Krosan Verge. Fujita summoned Sparksmith on his second turn, and followed up with Goblin Matron. He pretended to consider several goblins, but they were all Goblin Warchief. Noppadol searched for some land with the Verge, and passed the turn again, still yet to cast a spell this match. Fujita summoned Goblin Sharpshooter on his next turn, choosing to hold back the Warchief for the inevitable Wrath of God.

Sure enough, Noppadol cast Wrath of God next turn, as the potential damage was mounting up across the board. He did not have the land to counter either Fujita's Goblin Warchief, or the Sparksmith he drew to keep him company.

Things were looking quite bad for Noppadol at this point, as his hand had several counters, but no answers to the on-board threats. At eight life he took a risk to play Mirari, holding Renewed Faith in his hand. If he survived the next attack, which it looked like he would, the forked Faith would buy him some time to search for answers with Compulsion. Fujita cycled Gempalm Incinerator at the end of turn, looking to punish Noppadol, and finds the best possible punishment: Goblin Piledriver. With the Warchief giving it haste, it added an immediate five damage to the equation - too much for Noppadol to handle.

This game went much better for Noppadol. Fujita had no first or second turn play, making you wonder why he kept his hand at all, allowing Noppadol to get Compulsion into play against an open board. Noppadol countered Fujita's first play of Goblin Warchief, and his next play of Goblin Matron, although Goblin Sledder made it onto the board. Fujita's Siege Gang Commander, the first real threat of the game, was met with Wrath of God, and his follow-up of Skirk Prospector was underwhelming. Noppadol used Cunning Wish to find Envelop - guessing correctly that Fujita was banking on Patriarch's Bidding to get back in the game. 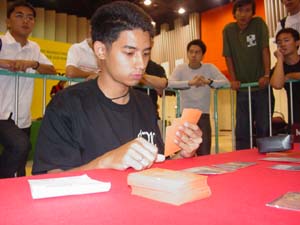 Noppadol took out a Mirari's Wake for the third game, and Fujita brought in his fourth Vortex, which is stronger going first.

The third game started with both players keeping their hands for the third time. This game, though, Fujita had a first turn goblin - Goblin Sledder. Noppadol led with Krosan Verge for the third time in a row, and decided to cycle a land instead of playing Compulsion. Fujita's Sledder was joined by Sparksmith, and Sulfuric Vortex made it into play uncontested. Noppadol was visibly shaken at this turn of events, as his Wrath of God suddenly didn't look so good. He cast it anyways, but Fujita had Siege Gang Commander waiting in the wings.

Noppadol, losing life rapidly to the Vortex, Cunning Wished for an answer, but would have preferred to have gotten the Wing Shards he boarded in. Fujita made the Vortex play irrelevant by using Siege Gang Commander in combination with Skirk Prospector (for the necessary mana) to do the last four damage.