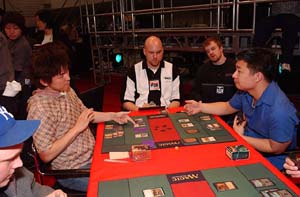 After years of coming to the Pro Tour, Ben Seck is finally playing on a Sunday. In fact, despite being a two-time Grand Prix champion and a true veteran, up until this tournament Seck had never won a cent on the Pro Tour. Ikeda is in a similar situation in the sense that he is also a veteran of the Pro Tour who is finally getting his moment in the spotlight.

Both players put down plains and swamps, as well as morph creatures on turn three. They traded shots since neither player wanted to block while tapped out, and Ikeda's morph flipped over to reveal Aphetto Exterminator, taking out one of Seck's morphs (Daru Healer). Seck summoned Daunting Defender, and Ikeda played Crude Rampart. Whipgrass Entangler gave Seck a way to get his creatures through, and the Exterminator attacked back for three damage.

Ikeda played another morph, as well as his own Whipgrass Entangler, which died to Swat on Seck's turn. Dive Bomber gave Ikeda an attacker in the air, as both players sent some unblocked offense back and forth across the table.

The game shifted dramatically when Seck played Starlight Invoker followed by Cabal Archon. This left him tapped out and prone to one more attack, but once he untapped the Entangler would be capable of really slowing down any potential attacks or blocks by Ikeda. It wasn't all downhill, as Ikeda had Cruel Revival to take out the Archon. Ikeda used Aphetto Dredging to get back his Exterminator, summoned Battlefield Medic, and ended his turn. Seck played yet another Cleric in Daru Healer, and sent Profane Prayers to the dome to win the first game.

Ikeda had a turn two Battlefield Medic, and then cycled Disciple of Grace, making his third land drop.

Seck- "Come on Ikeda, all these people are cheering for you! There's not ONE other Australian in the building!"

Seck- "It's not quite the same thing, it's like if I called you Finnish or something." 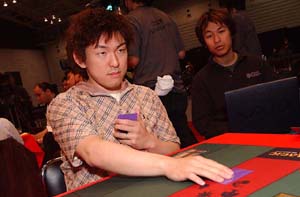 Seck- "This guy spreads the propaganda! 'TBS is great!'"

Ikeda built up the ground a little with Akroma's Devoted and Seck said, "Thank you for the combo!" as he played Aven Redeemer. A second Redeemer followed on the next turn to give Seck an army of 2/2 flying healers that didn't tap to attack. Soon they were attacking for four a turn without matching any resistance, and one of Ikeda's morphs turned over to reveal an Exterminator, which killed the Muse.

Whipcorder and a Husk for Ikeda followed, and suddenly the game seemed to be back to even. Seck cast Starlight Invoker, and had the eight mana to power it. Misery Charm killed one of the Redeemers, and with the help of the Whipcorder, Hollow Specter would now be able to get through for damage each turn. Ikeda did one better, and attacked with all his creatures except for the Whipcorder and Medic. This forced through a considerable amount of damage, and no creatures died in the process. Seck took his turn, drew, played another land, and both players noted that he had drawn too many this game. Eventually the numbers game caught up, and Seck was overwhelmed.

Ikeda played a turn two Sunstrike Legionnaire, and Seck had a morph. On the next turn he said go with three mana untapped and the morph waiting, and was clearly signaling Liege of the Axe. Ikeda played Dive Bomber, untapped his Legionnaire, and attacked with his morph. When the Liege flipped over, Ikeda tried to tap it before blockers, which caused a ton of chaos. At first, the judge missed the fact that the Legionnaire couldn't tap the Liege, and after a conference it was decided that the game would go back to the point of the illegal play, and Seck would be able to block the morph with his 2/3. That turned out to be a big deal, as Ikeda was tapped out and his morph went right to the graveyard- it was Aphetto Exterminator.

The game continued, and Seck played Whipgrass Entangler while Ikeda had Gustcloak Harrier to add to his army in the air. Seck summoned Aven Soulgazer to stop the beats, but Cruel Revival dealt with that answer. A second Soulgazer showed up, and Ikeda played Hollow Specter along with White Knight. Seck summoned Daunting Defender, and once again the game slowed to a crawl, with Seck's Entangler representing an eventual win. Swat took Ikeda's Legionnaire out of the equation, and Seck played Akroma's Devoted, allowing his Soulgazer and Daunting Defender to attack for a few turns, since a combat situation would not end up in Ikeda's favor. Once again, Profane Prayers was the finisher.

Ikeda opened with Battlefield Medic, and Seck played Starlight Invoker. Ikeda had nothing on turn three, and Seck played a morph. On the following turn Ikeda missed his fourth land drop, and still had nothing to play. Akroma's Devoted added to Seck's side, Ikeda found a fourth land, and summoned White Knight. Seck cast Aven Soulgazer, and on the following turn put Crown of Awe on his morph. The Soulgazer started to attack through the air for three, and didn't have to tap to do it either.

Ikeda's Gustcloak Harrier provided a way to stop the Soulgazer beats thanks to Battlefield Medic, but Profane Prayers after a block and activation eliminated the Medic form the equation. Ikeda played his own Akroma's Devoted, and Seck flipped over his morph on end step to reveal Daru Healer. He attacked, and played an eighth land, making Starlight Invoker ready to start gaining life. Just when things seemed to be at their worst, Ikeda used Endemic Plague to wipe all the Clerics off the board, leaving Seck with zero creatures on the board and Ikeda with White Knight and the Harrier. They attacked for four, and Seck played Cabal Archon, which died right away to Misery Charm (it was sacrificed in response). 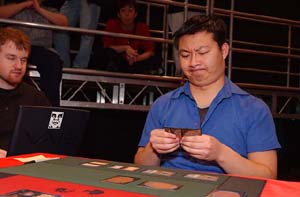 Ikeda played a key Whipcorder, stopping any chance of a comeback. Endemic Plague had been far too devastating, and Ikeda set it up perfectly. Seck found an answer to Whipcorder when it was likely too late, targeting it with Profane Prayers (with two Clerics out). Ikeda had the answer and removed one of them with Cruel Revival in response to force a fifth and final game.

Seck played a morph (Wingbeat Warrior), and Ikeda cast Hollow Specter. Seck was stuck at three lands and said go, staying back on enough mana to unmorph and kill the Specter. Ikeda stopped that plan, playing Pacifism on the morph and attacking with the Specter- he was stuck at three lands as well. Since both competitors were struggling to stay ahead with only three mana out, Ikeda rarely had the opportunity to activate Hollow Specter, and instead played morphs and Nantuko Husk to keep pace.

Seck found more lands and summoned Aven Soulgazer- Ikeda knocked on his deck, played a fourth land and triumphantly unmorphed Exterminator to kill the 3/3 flyer. Seck played Windborn Muse, and said, "If you cast Cruel Revival, I'm going to vomit." Ikeda's board position improved dramatically, as he found a fifth land and brought out Whipgrass Entangler along with a Battlefield Medic. Glarecaster followed on the next turn, putting Ikeda far ahead. A pair of Daru Healers slowed Glarecaster's attack down to one point of damage a turn, and on the next turn he played Endemic Plague, sacrificing a Medic.

Unfortunately for Ikeda, he seemed to not realize that Glarecaster is a Cleric, and it headed to the graveyard. Right after, Ikeda's Exterminator attacked into Seck's Muse, and died immediately with no trade due to Healer shields before the Plague resolved. This play got some mocking cheers out of some American spectators, as Ikeda was seemingly throwing away the game. Despite appearances, there was a plan in action, as Ikeda used Aphetto Dredgings to bring back Glarecaster and two other Clerics. A few turns later, the game was over on the power of the 3/3 flying rare bomb.