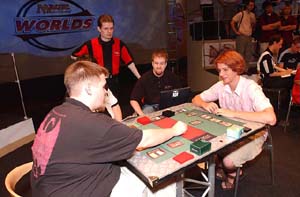 As soon as I got to the feature match table, I saw two Euro in coins on each side. Walls explained, "It's the split. It's all I could get out of him. He upped it to two this morning, it was at one." Nieminen is obviously very confident, but was nice enough to offer two Euros to Walls as a consolation prize.

Nieminen mulliganed his opening hand, getting a raise of the eyebrow and a smile out of Walls.

Walls- "You're just making it interesting, aren't you? I appreciate it. I'm a heavy favorite."

Nieminen- "For what?"
Walls- "The Team Rochester."

Both players were set to play each other right after this match was over, in the team finals.

Walls- "That's what I like to see. This is Magic!"

He resolved an Astral Slide, and Nieminen found his third land. Eternal Dragon was cycled to get a plains, and Nieminen sacrificed Krosan Verge. He untapped, and got to work gaining card advantage with Deep Analysis. Nieminen played Compulsion, and Walls brought back the Dragon on his upkeep, tapping one too many mana and taking a point of burn. Nieminen got to work putting cards through Compulsion, and flashed back Deep Analysis. The Eternal Dragon came out, and Nieminen didn't seem very intimidated. He tapped five mana, and played Mirari's Wake. Walls started some banter, asking "Ooh, I wonder what that is!" but then subdued his tone as he realized he was in trouble. A second and third Wake came down in a row on the following turn.

Walls- "You think you're good or something?"

A few turns later, Nieminen cycled Decree of Justice, and Walls conceded before X was declared. 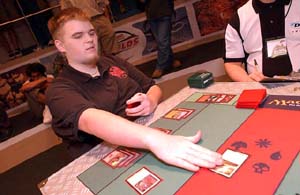 Nieminen played Compulsion, and Walls played a face-down Exalted Angel. Nieminen cycled a card through Compulsion and missed his third land drop, which got some excitement out of Walls. He flipped over Exalted Angel, and attacked for four. Nieminen found the lands he needed with the help of Compulsion, and Walls cycled Decree of Justice for two on end step- the spotter was out of Soldier tokens since all the other decks were running the Decree as well, so Walls had to use beads. The next attack was nullified by Moment's Peace, and Nieminen tapped out to activate Compulsion on end step. Before he could do anything else, Walls cycled Decree of Annihilation, and with Exalted Angel and two 1/1's on the landless board, won easily.

Walls (leans over to Dave Humpherys)- "Hey Dave, I won! I won my one game!"

Even after that statement, Walls mulliganed his hand as well.

Walls- "I guess you do go to church."
Nieminen- "I don't believe in God, so I guess he's on your side."
Walls- "Yep."
Nieminen (sarcastically)- "Yeah, God is always on the side of the Americans."

Walls played a second turn Burning Wish, and Nieminen countered it with Mana Leak. Walls resolved Lightning Rift a turn later, and Nieminen cast Cunning Wish to get Ray of Revelation on end step. He untapped, and drew three cards with Concentrate. Eternal Dragon was cycled, and Walls activated the Rift to deal two to Nieminen. Deep Analysis provided even more card advantage for the Finn, and a turn later, Nieminen stopped to think.

Walls did his best to try and break his concentration, with comments ranging from, "You act like you're playing a control deck over there" to "If I untap, you're dead." Finally, Nieminen decided to cast Deep Analysis and play Star Compass, leaving him tapped out. Walls cycled Eternal Dragon and Renewed Faith on end step, dealing four damage total with the Rift. The Dragon was brought back on upkeep, and Walls ended his turn. Mirari's Wake came out, and Ray of Revelation destroyed Lightning Rift.

Deep Analysis was flashed back, and followed by Compulsion. Walls cycled Decree of Justice on end step, making six Soldiers. They attacked, and Nieminen played Moment's Peace. He cycled cards through Compulsion, as Walls attempted to entertain the crowd. "This is the most boring thing I've ever done in my entire life. Actually, the most boring thing was playtesting, but this is second." Nieminen drew cards with Deep Analysis, and played Wrath of God.

Walls- "I thought you don't believe in God. You'll use his wrath though? Very sketchy."

Walls cycled two Renewed Faith, brought a Dragon back on upkeep, and played Astral Slide. Nieminen continued to cycle away cards with Compulsion, and had plenty of mana to work with. When Walls played Exalted Angel face-down, Nieminen responded with Ray of Revelation, destroying Astral Slide. The morph resolved, and Nieminen cycled Decree of Justice on end step, making fourteen Soldiers. They were 2/2 thanks to the Wake, and Walls conceded.

Nieminen played a first turn Verge, and Walls had a turn three morph. It flipped over on turn four as the Angel got to work, and Nieminen sacrificed the Verge. He didn't have any lands left, however, and was lacking a blue source of mana.

Ray of Revelation went to the graveyard, and the Angel attacked once more. Astral Slide came into play, and the Ray destroyed it. On the following turn, Walls played Lightning Rift, and cycled Renewed Faith to deal two to Nieminen and bring him to eight. An island finally showed up at this point, but it was too late. Nieminen tapped out for Wake, but Walls attacked, and cycled two cards to finish it. 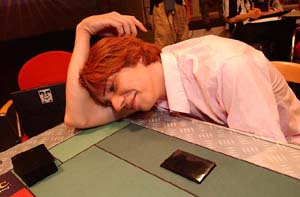 A second turn Compulsion was matched by Lightning Rift. On turn three, Nieminen sacrificed Krosan Verge, then untapped and cast Concentrate. Walls used the opportunity to cast Burning Wish, getting Overmaster. Walls would need to wait a few turns until he could get a spell to force through with it, but in the meanwhile, Nieminen was setting up with Compulsion. Nieminen played Mirari's Wake, and Walls decided to go for it.

He cast Overmaster, cycled Eternal Dragon to deal two damage, then cast Cleansing Meditation. This was devastating, and destroyed Compulsion and Wake. Nieminen responded by discarding two cards before it went away, and although Walls lost his Rift in the exchange, it set the Finn back significantly. Still, Nieminen had plenty of resources in his hand. He cast Deep Analysis to gain more of an advantage, and said go.

The game was now back to zero, although Nieminen had more cards. In fact, he had no trouble recovering, playing two lands followed by Star Compass. He then flashed back Deep Analysis, and played Compulsion. Walls played Lightning Rift, but Nieminen had Cunning Wish to go get Ray of Revelation and handle it. From this point, Walls didn't have anything going on, while Nieminen continued to activate Compulsion.

Walls tapped out on upkeep to bring back Eternal Dragon, and Nieminen cast Cunning Wish on end step, getting Stifle as insurance for Decree of Justice and Decree of Annihilation. Nieminen had the game under his control but was lacking a green source, as Walls mockingly speculated that there were none left in the deck.

Walls- "If I lose this game, I know that Bob Maher would have won it. That always consoles me."

He summoned Eternal Dragon, and Nieminen countered it by putting Circular Logic through Compulsion. Deep Analysis drew more cards, and Nieminen had the game completely under his control, but needed a way to win before his deck ran out. He was holding Decree of Justice, but with Walls at 22, he would need a lot of mana to make it work. Finally, he found a green source in Sungrass Prairie. Mirari's Wake followed, and Lightning Rift came out and was promptly destroyed by a Ray. Nieminen played a second Wake, and Walls' second Astral Slide didn't hang around for long, as Nieminen flashed back both Rays to destroy the enchantments. Decree of Justice was cycled after, and Walls conceded.