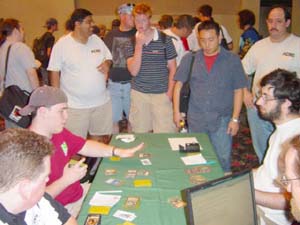 Valentin started off killing Adam's creatures as they were played one by one.

By the middle game Adam had Catalyst stone in play while Valentin had five swamps.

Sludge by Valentin for four took a bunch of Grizzly Fates out of Adam's hand, Adam unable to cast them because he didn't have double green.

"I'm very good at this game," Adam said as he top decked a second forest to flashback Grizzly Fate.

Mutilate and a Rancid earth for that pesky second forest took care of Adam's board.

Valentin tutored. Adam said, "So you don't have the Echoes in hand?"

After Haunting echos resolved removing just about Adam's entire deck from his library, Adam said, "I bet I got a lot of lands in there," looking at the deck. "I love this game," Adam said as he cast Quiet Spelcuation for Krosan Reclamation, the only card with flashback left in his entire deck. Adam removed it from the game and said, "It can join its friends." Adam had nearly his entire deck removed from game. "Stop tapping mana," Adam said as Valentin cast a spell on his turn. Valentin began waiting for the shade to finish off Adam. He then top decked a Diabolic Tutor for Nantuko Shade and Adam scooped up the cards. 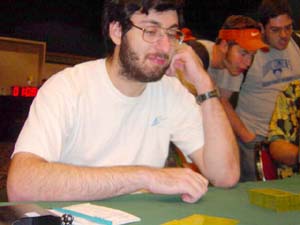 Game 1 seems to favor black, but after sideboarding with the extra Envelops and the Bearscapes from the sideboard, green/blue seems to take the edge.

"Not keeping," Adam said, as he was forced to mulligan down to six cards. His next hand was terrible: two Roar of the Wurm and an Envelop. Unless Adam drew a Mongrel quickly he would probably be unable to win, and he decided he just "Couldn't win," if he mulliganned down to five when I asked him about it after the game.

Four turns later, Adam was stuck with four Islands in play and one Forest and no creatures. When the second Forest showed up, Adam just said, "Go." Then he made a Werebear the next turn, which of course died.

Valentin made a Nantuko Shade. "Lucky," said Adam. The next turn, Adam cast Quiet Speculation for Deep Analysis and Grizzly Fate, but didn't have the mana to make any creatures.

The next turn after the shade attacked life totals stood at 4 to 20. 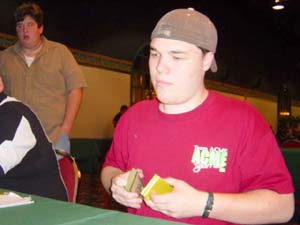 Adam made four bears, and when Valentin untapped he had a long think to decide what to do about them. He decided to start taking them out one by one with edict and butcher and an attack by the shade. Despite being able to make four bears a turn for quite a while, Adam was falling behind, as Valentin used up his elim spells on Adam's tokens. Adam cast yet another four bears when it was his turn.

On Valentin's next turn however, he top decked a Cabal Coffers, and that let him cast a Mutilate he had in hand, saving his shade by pumping it up enough to save it from Mutilate (he didn't have quite enough swamps in play to save it with just one Cabal Coffers last turn), while killing all of the other creatures in play, letting him win at once with the shade remaining the only creature left on board attacking for a bundle.

Final Result: Valentin made it look easy as he won 2-0.