Two Level 4 Mages squared off in the first round of play today. Both are clearly experienced, but Kazuya Mitamura, in his third Pro Tour Top 8, had a big edge on Sunday play over Belgian Christophe Gregoir, who is playing in his first Top 8.

Mitamura has run Jund all three days of this tournament and is comfortable with today’s draft. Gregoir came into Sunday at the top of the standings and had drafted whatever was open. His aggressive red-black deck would have to try to push a lot of damage through early before Mitamura’s mountain of massive monsters gummed up the board. 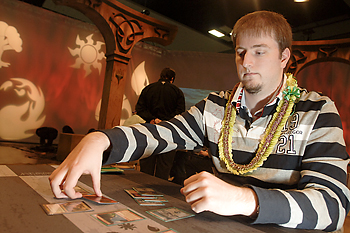 Christophe Gregoir tries to keep the pressure on. Christophe won the roll, and both players had Mountains to kick things off before Gregoir started the beats with Dragon Fodder. Mitamura enchanted his Mountain with Trace of Abundance, taking 2 from the tokens and nodding as Jund Battlemage joined Gregoir’s squad. Mitamura slammed the brakes with a Rhox Brute, but Blightning ripped a Sylvan Bounty and Mountain from his hand the next turn before Kederekt Parasite hit the board for Gregoir.

The brute came over, knocking Gregoir to 16 as the Japanese player added Monstrous Carabid. The Japanese player went down to 14 from the Battlemage’s effect on his end step, and Kederekt Parasite dealt another point to Kazuya on his draw step. Unfazed, Kazuya shipped his two 4/4s into the red (gray) zone to eat a token and take his opponent to 8. Drumhunter joined his team and he ended his turn without drawing a card, his pair of 4-power guys falling just short.

Gregoir paused to survey the board after his draw. He came out of the tank with Bone Splinters on Rhox Brute, giving up his Kederekt Parasite before passing. A Fiery Fall from Mitamura moved the blocking Jund Battlemage out of the way, and Vengeful Rebirth sent Gregoir reaching for the board in this best of five series.

Mitamura flashed a grin as Gregoir shipped his opening hand back and the Belgian sighed as he had to go fish again. His five card hand was serviceable, but he missed his second land drop.

Mitamura shook his head at Gregoir’s misfortune as he ran out his three basic land types and a Vithian Stinger after Gregoir had found a second Mountain and played Dragon Fodder. The Shaman picked off the poor tokens before Gregoir’s Magma Spray could remove him from the game, but Gorger Wurm was a fine backup plan that quickly started taking big chunks out of Gregoir’s life total. After assembling five Mountains, the Belgian found a Swamp and sixed Kazuya with Singe-Mind Ogre revealing Vengeful Rebirth. The Japanese player flashed Fiery Fall to go with his Regrowth on ‘roids, and the players were off to Game 3. 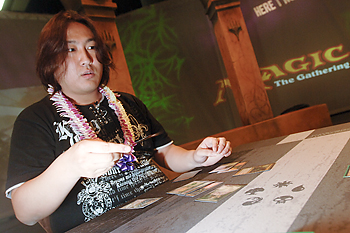 Kazuya Mitamura calls his shot. Gregoir chose to start again and kept after some deliberation. Kazuya immediately went to Paris twice, but Gregoir remained stoic as he hoped to claw back into the match.

Both players hit their first two lands as Gregoir cycled a Monstrous Carabid to smooth his draw out. At the end of turn three he had two Swamps, a Mountain and a fresh Veinfire Borderpost, while Mitamura had Swamp, Forest, Mountain. Gregoir added a not-very-hungry Thorn-Thrash Viashino to the board, which Mitamura replied to with a Goblin Outlander. The next turn was big for Gregoir, who equipped a Jund Hackblade with Lightning Talons before sending the team, trading his Thorn-Thrash Viashino for Goblin Outlander and getting in for 5.

Mitamura’s Gorger Wurm wasn’t good enough, as Gregoir sent Blightning and Breath of Malfegor at the Japanese player’s nugget over two turns after his ‘Blade hacked away at Mitamura’s life total.

Both players had lands for the first three turns before Mitamura ramped up with Trace of Abundance. Gregoir calmly played Goblin Assault, but Carrion Thrash from Kazuya looked to neutralize the threat. Bone Splinters took down the big blocker as Jund Battlemage joined the Belgian team, but Rhox Brute was a fine substitute, eating the new token while watching Sewn-Eye Drake fly over for 3. Gregoir finished his turn with Kederekt Parasite, dealing a point on the draw.

Vithian Stinger entered the fray just as Sewn-Eye Drake left with Sangrite Backlash, and Rhox Brute ate the Parasite as it came through with a token buddy. Gregoir’s big finish was Flameblast Dragon, but Kazuya had the Vengeful Rebirth to slay the Dragon and recover his Carrion Thrash.

Out of gas, Gregoir lost both of his tokens to Vithian Stinger and Rhox Brute, while Mitamura added more and more beef to his board in the forms of Gorger Wurm and Carrion Thrash. Gregoir’s lands and Dragon Fodder couldn’t keep up, and he extended the hand. 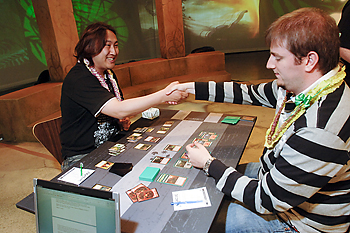