Quarterfinals: The Walk of Fame 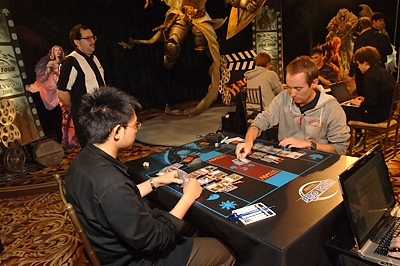 2006 World Champion Makihito Mihara impassively faces off against level 4 pro Jan Reuss of Germany.Ruess got out of the gates quickly, looking to put Mihara on the defensive as fast as possible. His Cursecatcher managed to attack for one, but his turn-three Silvergill Adept never got online. Mihara's second-turn Mutavault kept the Merfolk at bay. Ruess had a Reejerey in his hand and didn't want to frivolously throw his men away if he would be able to force much worse trades in turns to come. Mihara's third turn brought him a Bonded Fetch, which would help him improve his card quality as well as preparing his graveyard for a potential Reveillark.

On his fourth turn, Ruess played a Sygg, River Guide. Syggy hit a little Rune Snag on his way in, but Ruess had enough mana to pay the extra two. That was exactly what Mihara wanted, though. Now that Ruess was tapped out, Mihara was able to play the Sower of Temptation he was holding to steal Ruess's newest threat. With Sygg batting for the opposing team, Ruess was left with very little in the way of an offense. He was forced to draw his card, play a land, and say go.

Mihara evoked a Mulldrifter on his following turn before sending his team, press-ganged Sygg and all, across after Ruess. During Mihara's end step, Ruess tried to Repel the Sower of Temptation to steal his Sygg back. Mihara had a Momentary Blink to keep it around, but was almost tapped out, giving Ruess an opportunity. Ruess took full advantage of his window to drop a pair of Merrow Reejereys onto play. The creature enhancement a pair of Reejereys provide would have been crippling to Mihara, but he made a Pact of Negation to stop one of them.

Mihara untapped, re-tapped out to pay for his Pact, played a sixth land, and then just shipped it back to Ruess. Despite being given a second window of opportunity, Ruess was out of gas and unable to take advantage of Mihara's vulnerable state. A few turns later, after no new additions to the board from Ruess, Mihara put the game away. He played a Sower of Temptation, preparing to steal Ruess's Reejerey. Ruess had a Venser, Shaper Savant to bounce the spell, but it got Rune Snagged. Thanks to the Reejerey, Mutavault, Sygg, and the Sower were able to finish Ruess off.

Ruess's had a Silvergill Adept on the second turn this game, and revealed a Sygg, River Guide. Mihara had a turn-two Mind Stone, which meant the possibility of a turn-three Sower of Temptation. Ruess had an answer, though. He played a Cursecatcher in addition to his Sygg, preventing Mihara from Sowing before Ruess could untap.

Mihara dropped to 13 after the following turn's attack. He needed an answer soon, and the Wrath of God he played the following turn seemed to be it. However, Ruess had Sage's Dousing to counter it. Mihara had enough mana available to play Rune Snag, but couldn't since Ruess's Cursecatcher would just be able to counter it. The little one drop was having a huge impact on this game. Ruess played a Merrow Reejerey on the following turn and, after activating his Mutavault, sent his team in for lethal.

Blindingly fast, this game was the perfect example of how dominating a good, aggressive draw can be when backed up with just the right amount of disruption. Mihara had the answers to Ruess's threats, but he was always just a turn too far behind to do anything. 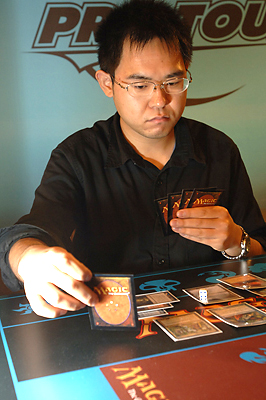 Mihara makes the magic happen.Ruess mulled for a minute before deciding to keep his starting seven. Mihara started building his mana early with a turn-two Mind Stone. It didn't stick around for long, though, as he was forced to sacrifice it on the following turn in an attempt to find a third land. His deck wasn't up for cooperating, though, and he had to ship the turn back to Ruess.

Ruess pressed the mana-screwed Mihara with a third-turn Merrow Reejerey. Mihara's deck still refused to give him a third land, and he was forced to discard a Body Double. It was a good card to have to discard, but probably little consolation considering the situation. His deck finally provided him a third land, and he tried to get a way back into the game with a Bonded Fetch. Ruess played the tempo game, though, and had a Venser, Shaper Savant to return the spell to Mihara's hand. When he tried to replay it on the following turn, Ruess just Dismissed it with Cryptic Command.

Ruess set the clock to two turns as he dropped Mihara to seven on his following attack with a swing from his Reejerey, Venser, and Mutavault. Mihara tried to buy himself another turn with a Sower of Temptation, but Ruess had a Cryptic Command to seal the game.

Mihara had his back against the wall this game, and was going to need to run the table in order to escape to the next round. Ruess helped his cause with a mulligan to six. Mihara's deck hadn't really had an opportunity to do many of the sick things of which a Reveillark deck is capable. His mana problems in the last game prevented him from really doing anything, and Reuss had perfectly controlled the second game.

For this game, Mihara started with a pair of man-lands in the opening turns, while Ruess played an unfamiliar face thus far: Stonybrook Banneret. The Banneret let him recruit a Silvergill Adept on the following turn, but when his deck didn't give him a third land, he was left at just that. Mihara wasted no time digging with a third-turn Mulldrifter. Eager to repeat his first game success, he also used Sower of Temptation to steal Ruess's Banneret, slowing him back down and amplifying his mana problems. Ruess was able to play another one, but that was all he could do since he was still stuck on two lands.

Mihara pressed steel to flesh and locked the game up over the next few turns. Venser, Shaper Savant bounced Ruess's second Banneret, and when he tried to re-play it, Mihara had the Rune Snag. Reuss's deck did finally cough up a third land, and he used it to drop a Merrow Reejerey to give him some sort of presence. When Mihara dropped a second Sower of Temptation into play, Ruess sighed and scooped up his cards.

This match had essentially become a best of three series. Two games lost to extreme mana problems, one on each side, effectively eliminated the middle of the match. When Mihara looked at his opening hand for the final game, he was visibly despondent about its contents. After a bit of deliberation, he shipped it back. His next six provoked another displeased response. He pinched his eyes shut and rocked forward as he pained over whether or not he thought his hand was capable of beating a decent draw from Ruess. He chose to keep it, but didn't seem too pleased about his chances. 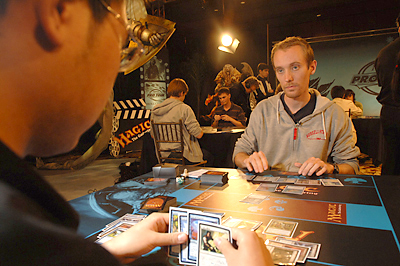 Reuss catches all the curses he can.Ruess started out with his Game 2 all-star: Cursecatcher. When he followed that up with a second copy and a Tideshaper Mystic, he seemed poised for a little Reejerey action. Mihara played his second land and passed the turn back to Ruess with Rune Snag mana available. Not wanting to get Snagged (and wanting to maintain his ability to counter something), Ruess just attacked and returned the turn to Mihara. Mihara drew his card and then studied his hand for a solid minute. Eventually, he decided it was worth running his Bonded Fetch into a potential counterspell. Ruess chose not to counter the Fetch, which would provide Mihara both a way to improve his card quality and a blocker for Ruess's men. Mihara let out a little sigh of relief as the Fetch hit the table. He knew that it was going to slowly allow him to start making up some ground.

Ruess untapped and played a third copy of Cursecatcher, sent his team, and passed the turn back to Mihara with lands untapped. Mihara attempted a Kitchen Finks on his turn, but Ruess used his excess mana to Sage's Dousing the backbreaking Finks. Ruess sent his entire team, including an activated Mutavault, into Mihara's board, dropping him to 8. Mihara managed to get the game back under control on his following turn. It seems odd that a card called Pyroclasm should be able to kill a bunch of Merfolk, but it isn't for me to decide what can and can't happen in this game.

Despite leaving Ruess with no creatures, Mihara was still in some hot water himself. Ruess had a Mutavault, and despite playing a Mutavault into a Sower of Temptation, he still had a long way to go. Ruess had a Sunlance for the Faerie, which drew a chuckle from across the table. Ruess's last unabated swing with the Mutavault dropped Mihara to 6.

Mihara played a Faerie Conclave on the following turn, giving him yet another way to block the Mutavault. He also played a Body Double, for which Ruess had a Cryptic Command. The path was clear now, and Ruess played a Reejerey and swung in to halve Mihara's life total. All Mihara could do was try to evoke a Reveillark on the following turn. When Ruess showed him a Sage's Dousing, Mihara let out a surprised "Ooooooooooh!" He wasn't quite dead, since his Mutavault could block Ruess's... that is, until Ruess dropped a Lord of Atlantis into play to islandwalk in for an excess of lethal damage.

Jan Ruess defeats Makihito Mihara 3–2 and advances to the Semifinals!