Quarterfinals: We Didn't Start the Bonfire

As Joshua Cho and Thomas Holzinger shuffled up for their quarterfinal match, the two talked about how they got where they are. Cho, who is representing SCGBlue, earned his way to the Pro Tour Avacyn Restored Sunday stage through a win at a Pro Tour Qualifier. His PTQ win earned him an invitation to his first Pro Tour, and with how well he's been doing this weekend, it seems clear that it won't be his last.

Holzinger, on the other hand, has played in eight Pro Tours, but it wasn't until his win at Austrian Nationals that he became known. His country's team finished 3rd at Worlds 2011, and his Top 8 this weekend has locked up platinum status for next season. 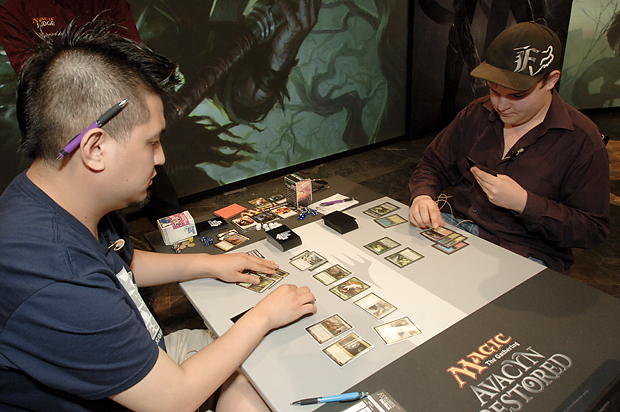 Both Joshua Cho and Thomas Holzinger achieved personal milestones with their Top 8 this weekend.

While the two players are new to the Top 8 spotlight, that doesn't mean they aren't any less hungry for a win this weekend. The two players shuffled up and began play in a matchup showcasing two different versions of the White-Red-Green Wolves and Angels archetype.

Cho led off with an Avacyn's Pilgrim,while Holzinger started the game off with an Evolving Wilds (fetching a Mountain) and a second-turn Scorned Villager.

Cho got started with some real action when he brought Huntmaster of the Fells to the table on turn three. The Huntmaster did not last long though, as Holzinger answered back with a Garruk Relentless to take down the four cost creature before it got out of hand. An attack from Cho's remaining token disposed of Garruk, but Cho had no other action, causing Holzinger's Scorned Villager to transform. 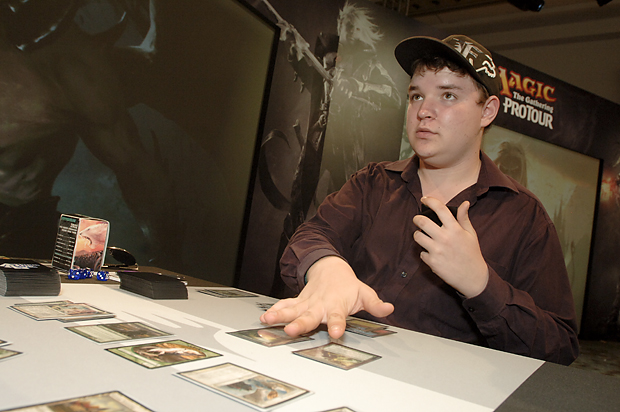 Why have a heart of gold when you can have a Wolfir's heart of silver?

With Gavony Township in play, Cho now represented lethal in play with his two Angels. Holzinger played a Borderland Ranger and Huntmaster of the Fells, going up to 10 to stay alive, but a Bonfire of the Damned for 3 sealed the deal for Cho, bringing Holzinger within reach of the angel army.

Holzinger's first-turn Clifftop Retreat let him point a Pillar of Flame at Cho's turn one Avacyn's Pilgrim. Holzinger played a Pilgrim of his own, which attacked on the next turn before he played Borderland Ranger. Cho had his own copy of Borderland Ranger to find a Mountain, giving Cho access to all the colors of mana he would need to cast his spells.

Holzinger and Cho traded Rangers before Holzinger added a second Avacyn's Pilgrim to his board. His follow-up miraculous Bonfire of the Damned answered Cho's Huntmaster of the Fells, but Cho calmly untapped and played a Wolfir Silverheart.

Garruk Relentless from Holzinger would give him a stream of wolves, but a second Wolfir Silverheart gave Cho a practically untouchable duo of 12/12 monsters. Holzinger paused when Cho announced that the Silvereart would be attacking a player and not Garru. He allowed the Wolf Warrior to get through for a ton of damage, content with letting his Garruk generate more wolves when he needed it.

However, a Bonfire of the Damned showed that Holzinger's decision was costly. His board went up in smoke and the two wolves crashed in for way more than lethal. 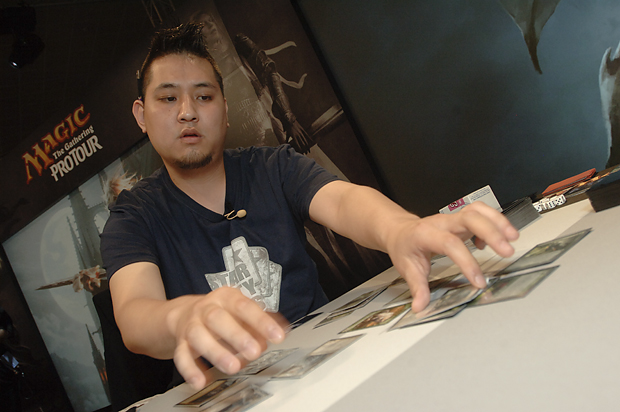 The Bonfire is one thing. The two 12/12 Wolfir Silverhearts is something else.

Holzinger and Cho both looked at unexciting openers and chose to mulligan to six. Both players led with Avacyn's Pilgrims, but Cho went over the top on Holzinger with a second Pilgrim. Holzinger, meannwhile, was stuck on one land, and when Cho played a Huntmaster of the Fells, the game and match looked like it was quickly slipping away from Holzinger.

Holzinger found his second land on top, and a Borderland Ranger ensured that he would have a Mountain, but when Cho passed to transform his Huntmaster, Holzinger would be denied any sort of real protection (while also being limited on white mana). Bonfire of the Damned for 1 let the Austrian pro wipe away Cho's Pilgrims, but not before the American player dropped a Restoration Angel into play.

Attacks from Cho's creatures left Holzinger without any creatures and at 11 life, but Cho found another land for a Huntmaster of the Fells. When Holzinger tried to double block Cho's Ravager of the Fells, Brimstone Volley ensured that his Werewolf would survive. Holzinger's Wolfir Silverheart was taken out by Fiend Hunter, and Cho brought Holzinger to 1.

"Hoping for a miracle," Holzinger said, as he peeked at the top of his library. When a Bonfire was not waiting for him, Holzinger offered Cho the handshake.

Joshua Cho wins 3-0 and advanced to the semifnals!