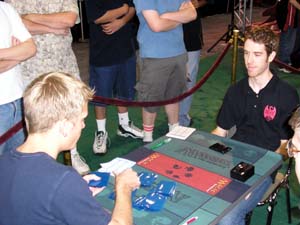 Patnik, left, from CMU faced off against YMG's Chris Manning.

the past couple of years, Chris Manning has re-invented himself as a New Yorker. The one-time Harvard student is now a floor trader at the same New York firm as Magic standouts Chris "Deadguy" Pikula, Igor "DKLA" Frayman, and Jamie "Sped" Parke. In fact, since moving to the Big Apple, Chris has taken an apartment spitting distance from Neutral Ground, long a Mecca of American Magic.

And yet Manning appeared for his quarterfinal matchup in a black tee shirt sporting "a poorly drawn pigeon" in red. "They helped me test the matchup last night," explained Chris. He had returned to his Your Move Games roots.

On the other side of the table was Michael Patnik. Previously an undergraduate at the University of Pittsburgh, Michael is currently a graduate student in electrical engineering at, yes, Carnegie Mellon University.

"This is one of the classic matchups," began emcee Randy Buehler. The crowd raptly anticipated the whole "control vs. beatdown" introduction given Chris's Black-green Death Cloud deck and Michael's White Weenie, but no. Randy proclaimed it yet another battle between YMG and Randy's old cadre, Team CMU.

Michael won the roll and opened with… a mulligan. His six-card hand was better, with Isamaru, Hound of Konda on the play. Chris missed his third land drop and Michael took the opportunity to recruit a pair of Soldier tokens at the end of his opponent's turn.

Michael's next two turns were both brutal: Damping Matrix followed by Hokori, Dust Drinker. Chris answered with a Viridian Shaman for the former and an Echoing Decay for the second. Meanwhile, Manning hit his stride and started to lay mana. Kokusho the Evening Star threatened to take the game from Patnik.

Michael was unimpressed. A second Hokori replaced the original and joined an increasing number of tiny creatures. Chris had Eternal Witness for his Echoing Decay but didn't have the time to aim it at the Dust Drinker just yet, even though he had another Eternal Witness in his grip.

Patnik knew that he didn't have a lot of time. He made some Raise the Alarm tokens at the end of the turn and pondered an attack. Deciding it was right to send four points of flyers in the air, where Chris's Shaman and Witness would have nothing to say, Patnik left the next decision to Manning.

Chris could block with his Legendary Dragon Spirit and take the rest to stay at one life, Echoing Decay the Dust Drinker, and get a full untap. He decided, however that play would put him dead on board, even with his second Witness in grip, unless he plucked another relevant card. Michael would have two Blinkmoth Nexuses, two Suntail Hawks and a Lantern Kami, not to mention a number of ground weenies, while Chris would have not enough life to defend. As it ended, the Dust Drinker bought enough time from the more powerful deck to force through lethal damage over the next two attacks.

Both players declared mulligans, but Manning's six-card hand was explosive. Turn-one Sakura-Tribe Elder (off a Chrome Mox) set up a turn-two Kodama's Reach. 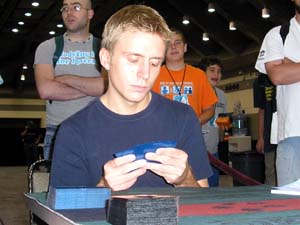 Patnik kept swarming with creatures but Chris had the answers.

Michael created a small army of creatures, but Chris answered with Solemn Simulacrum, digging up more lands to set up a sick Death Cloud. When the dust cleared, Manning had two lands, a Mox, and a card from his Solemn sacrifice, while Michael had an irrelevant Damping Matrix and an irrelevant Glorious Anthem.

Both players topdecked into lands for the next couple of turns. Chris was actually worried about the two or three Plains Michael had managed to assemble, so when he drew an Eternal Witness, Manning decided to get back his Death Cloud and re-ruin Patnik's position.

This plan quickly went down the toilet as Chris's next two topdecks were Kokusho and Ink-Eyes.

It wouldn't be a game in this matchup if one of the players didn't take a short flight to Paris. Chris Manning once again squandered his opening grip, and had no land at all on his first turn. Patnik ran a 1/1 and 2/2 out in the meantime and got his beats going.

Chris's second turn he played Okina, Temple to the Grandfathers and dropped a Chrome Mox for Sakura-Tribe Elder. Patnik come across again; Chris sacrificed his Tribe Elder to set up

on the next turn.

The Persecute was a poor one, as Michael put Raise the Alarm on the stack and showed a Plains as his last card. Chris had a 4-for-1 Hideous Laughter the next turn, but had taken too much damage to handle the Jinxed Choker Michael showed him subsequently.

This one was all Manning. A testament to getting to play first, Chris opened with a turn-one Sakura-Tribe Elder, imprinting Hideous Laughter on Chrome Mox. How's that for a show of strength? He didn't even need his weenie sweeper. Michael responded with Plains and Lantern Kami. Not surprisingly, Chris sacrificed his Snake Shaman at the end of Michael's turn and played a second- turn Persecute on White. This time the sorcery hit and Michael's board looked unimpressive: he had just a Plains and Lantern Kami in play.

Patnik rebuilt admirably… but Chris was holding Kokusho, which came down in short order. Once Ink-Eyes followed suit - especially with Shizo, Death's Storehouse already in play to give it fear - the game was decided. 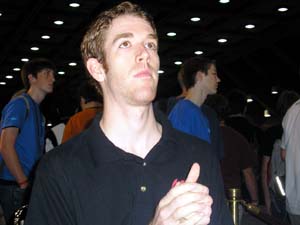 In four of these five games, at least one of the players declared a mulligan, with five total mulligans over the course of the match. Once again it was Manning's turn.

An otherwise exciting match ended on a less-than-exhilarating note. Chris opened up with a Sensei's Divining Top, but could not find a second land on his upkeep. Somewhere around turn three or four, he was able to flip his Top into a Swamp, but he was a mile behind Michael's smooth curve into Glorious Anthem. Chris had kept with a pair of Tribe Elders to stabilize his mana, but not finding that crucial second land until it was too late - even though he had the Top - kept him from ever playing another spell.

Final Score
Michael Patnik takes it 3-2 over Chris Manning, and earns the right to battle Antonino De Rosa in the semifinals.