Quarterfinals: What a Stele

Zac Hill is a world renowned deck builder, former Grand Prix finalist, and columnist for the popular Starcitygames.com. He entered the Top 8 at Honolulu on the back of a strong Block Constructed and Limited performance on the weekend. His opponent, Michal Hebky, belongs to a conglomerate of Eastern European players who are making a surge into dominance of late led by big names like Martin Juza and Matej Zatlkaj. 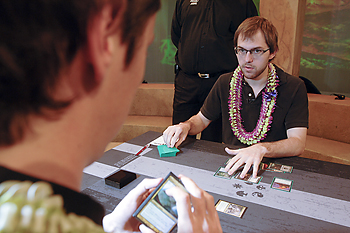 Zac Hill manages to look colorfully festive and intensely serious at the same time.Both players had one- and two-drops, with Hill leading on Executioner’s Capsule and following up with Dregscape Zombie while Hebky had Wildfield Borderpost and Valeron Outlander. “That’s a pretty good two-drop,” Hill commented, glancing at his field of black permanents. A Faerie Mechanist from the American revealed Courier’s Capsule, and the blue 2/2 promised to hold back the protection-from-black Outlander for a time.

Hebky tried for a Waveskimmer Aven, but Hill finally decided to use his Executioner’s Capsule to deal with the 2/4. That allowed Zac to get in with a Skeletal Kathari, which he had played upon reaching five mana, and the turn was passed. Michal had a bomb on his own turn in the form of Enlisted Wurm, but it revealed Soul’s Majesty and, because the cascaded card resolves first, the Czech player was forced to target his lowly Outlander, drawing two cards instead of five. The totals stood 16-12 in Zac’s favor.

Unearth was proving to be a huge boon for Zac Hill, as he watched Etherium Abomination and Dregscape Zombie trade for his opponent’s Enlisted Wurm, only to return from beyond the grave and whomp Hebky to 7. Zac’s follow-up was a Kathari Screecher, but when Michal tapped six mana and played Obelisk of Alara, Zac sucked in his breath.

The artifact was certainly a bomb, but Michal could only activate the blue, green, and white abilities. Judging by the look on his opponent’s face, however, that seemed like more than enough to put the game away if Zac couldn’t come up with a solution soon. Hebky sent his Valeron Outlander into the red zone, then followed up with Esper Cormorants and Dawnray Archer. Zac, who was down to just a Skeletal Kathari, needed to find a pretty powerful fix, and he needed to find it soon.

Instead, he passed the turn without playing anything, watching while the Outlander attacked larger and larger from exalted creatures hitting play and Hebky’s life total started increasing in 5- point increments.

“With thirteen lands, I can cast all my spells ....” Hill said, frustrated but in a good natured manner. Still without a blocker for his opponent’s protection-from-black creature, the American packed it in when Hebky stopped using his Obelisk to gain life and started using it to pump his attacker.

The background noise in the Top 8 was somewhat more than usual. With three boisterous Americans enjoying the bright lights—Hill, Brian Kibler, and Paul Rietzl—the cacophony was considerably above the average. Hebky, one of two soft-spoken Europeans playing on Sunday, offered up the occasional good-natured chatter with his opponent while calmly figuring out how to sideboard. He even teased Hill, saying, “You showed me you have white, so I have to sideboard a little differently,” referencing the lands Zac had revealed in his hand at the end of the first game. The American gave no sign whether he was actually playing white or not.

The beatdown commenced early in the second game with Zac Hill following up an Esper Stormblade with a Lich Lord of Unx. That’s a solid start in almost any Shards of Alara Block Draft, but he was helped by the fact his opponent had mulliganed to five and missed a land drop. When the American played a Mask of Riddles to get further up on the card count, things started looking really bad for Hebky. The Czech player used a Crystallization to stem the Stormblade tide, but missed another land drop and had had no plays beyond a Court Homunculus.

Deny Reality from Zac bounced a Hebky Wildfield Borderpost, netting Hill a free Kathari Screecher and spelling bad news for Michal. He made the most of the situation, however, by noting the bounce spell on his score pad; while it was looking difficult for him to win the game, he was going to get as much mileage out of the loss by keeping in mind which spells he needed to play around for the games to follow. It was a heads-up play, and the type of careful study of the game that separates the great from the good.

A turn later, after Zac had played a Zombie Outlander, the inevitable concession from the overwhelmed Hebky came, and the two were on to the third game. 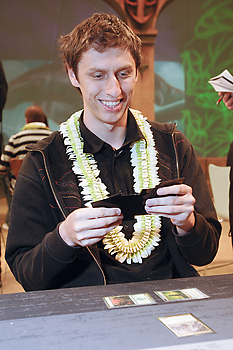 Michal Hebky likes what he sees.The pace for the third game was much slower than the previous two, with neither player dropping a creature until Hebky broke parity on the fourth turn with Esper Cormorants.

The 3/3 flyer was a pretty hefty beater, but Hill was right behind. “Raise,” he said, as he plopped a 4/4 Tower Gargoyle into play, trumping his opponent’s creature by +1/+1.

“There’s the white splash,” Hebky responded, referencing the lands his opponent had revealed in the first game.

Crystallization dealt with Tower Gargoyle, and Hebky added Kathari Screecher to the board while Hill made a Skeletal Kathari. Deciding to remain on the warpath, Michal sent his team and dropped his opponent to 12. When Hill played an Infectious Horror, Hebky had to lean in to read the card. Zac, aware the card was not a popular choice for most pros when determining which cards were “playable,” could only laugh as Hebky teased him about the 2/2. “It’s very infectious!” the American deadpanned.

Bant Charm let Michal permanently deal with Skeletal Kathari and attack his opponent to 5, but Zac battled back. He used a Controlled Instincts to neutralize a Valeron Outlander Hebky had played, then used Executioner’s Capsule to put an end to Esper Cormorants. Michal still attacked him to 3, and followed up with Waveskimmer Aven, meaning Zac wasn’t out of the woods yet. Hill plopped a Kathari Screecher of his own into play to help block, but the 2/2 was forced to chump Waveskimmer and Zac fell to 1. When he didn’t find an answer to Hebky’s horde waiting for him on the top of his deck, the players were on to the fourth game of the match.

Both players had aggressive starts for the fourth game. Hebky used an Aven Squire and Ethercaste Knight to get in early thanks to exalted, while Hill played Kathari Screecher and Mask of Riddles to both go on the offensive as well as stay ahead in the card count. Michal started missing land drops, however, and Zac had a big turn as he played Esper Stormblade and Sedraxis Alchemist, putting Ethercaste Knight back into his opponent’s hand. Not wanting to fall too far behind, Michal played an end-of-turn Winged Coatl.

Hill had a Death Baron to pump his Sedraxis Alchemist, and quickly moved his team into the combat step. Michal pushed a Guardians of Akrasa, which he had played on his own turn, to block the 3/3 Alchemist but, despite reading Death Baron, didn’t realize the Zombie Wizard his defender was blocking had deathtouch. It was a rare mistake from the Czech player, who had been playing very tight throughout the rest of the match, even capitalizing on some misplays from his American opponent. As Zac finished the next combat step, the totals stood 14-7 in Hill’s favor, with Hebky still stuck on three lands. Facing an overwhelming board of creatures outnumbering his side two-to-one, Michal did the math and conceded the game, sending the players to the rubber duel.

A Naya Hushblade from Hebky was the first threat on the board in the final game of the match. Not to be outdone, Hill played Zombie Outlander, keeping the 2/1 green creature his opponent had led off with home. Michal did not have a third-turn play, but Hill did, using Parasitic Strix to get further ahead in the count. 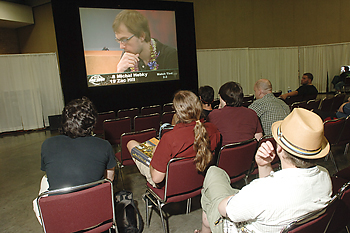 Spectators watch the match on the big screen.Falling behind slightly, Michal made up some ground with Messenger Falcons, but had no creatures the following turn and fell to 12. Zac, meanwhile, dropped an Esper Stormblade onto the board, happy to be on the offensive at a healthy 20 life. His happiness was seriously dampened as Hebky played his Obelisk of Alara. The artifact was making its second appearance in the match, and what a clutch time to do it! Hebky could crawl back into the game, gaining 5 life each turn—provided that Hill didn’t overwhelm him with a heavily developed board and Hebky’s deck didn’t fail to give him the occasional creature.

Zac attacked with Esper Stormblade and Zombie Outlander, trading his 3/2 Stormblade with his opponent’s Messenger Falcons. When Hebky attempted Esper Cormorants on his turn, Zac was ready with Soul Manipulation, countering the 3/3 and returning his Parasitic Strix to his hand. Worried about falling too far behind, and clearly pained to have to do it, Michal used Crystallization to prevent Zac’s Dregscape Zombie from attacking.

Hill didn’t seem impressed, playing a Mask of Riddles to get ahead in the card count again, and attacking Hebky with Zombie Outlander. Thanks to the Obelisk, Michal wound up +3 life on the turn, and when he played Ethercaste Knight, he had an artifact creature with which he could block Zombie Outlander regardless of whether it had fear from the Mask or not. The American added Faerie Mechanist and Parasitic Strix to his board, and was able to attack Hebky to 12.

Slowly but surely, the Czech player started grinding his way back into the game thanks to Obelisk of Alara. He stopped using it to gain life and instead started digging through his deck. That netted him a Bant Charm, then a Kathari Screecher to help stem the tide of Zac’s beats. Once the 2/2 flyer hit the board, Hebky started using the Obelisk to pump his “wall,” slowly trading for Zac’s team. That actually bought Michal the time to go on the offensive, and soon the totals stood 11-5 in Michal’s favor. It was a gigantic turnaround, aided by the fact that Zac Hill had started drawing through a glut of lands.

When Hill used Deny Reality to bounce his opponent’s 2/2 Kathari Screecher, Hebky activated his Obelisk to draw a card and discard the 2/2 for unearthing the following turn. That gave him just enough creatures to swing through Zac’s blockers and pump with Obelisk for lethal damage.

Michal Hebky defeats Zac Hill 3-2 and advances to the Semifinals!