Both Joel Calafell and Ming Xu are accomplished magicians who are making their Sunday debut at this event. Calafell has a prior Grand Prix Top 8, whilst Xu managed to qualify on the strength of his rating alone.

Though Calafell is the more experienced player, having attended five Pro Tour events, given China's growing prominence on the global stage, Xu may well be the herald for a wave of Chinese pro players, much akin to how the Japanese swept onto the Pro Player scene.

Calafell won the die roll and chose to play. 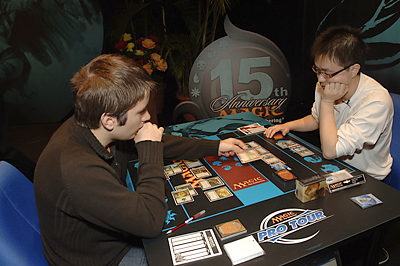 Joel Calafell and Ming Xu quietly get down to business.The game started without mulligans, and Calafell opened with Elvish Warrior on turn two, and it was answered by Amoeboid Changeling. Winnower Patrol joined Elvish Warrior the subsequent turn, putting the pressure on Xu to stem the bleeding.

Xu's Drowner of Secrets was an enabler for the primary kill mechanic in his deck, but it wasn't going to do much to stop the beatings. Calafell revealed Elvish Warrior on the top of his deck, bringing Winnower Patrol to 4/3, and Xu promptly tapped his changeling to mill the potential threat away.

When Calafell attacked with mana open, Xu chose not to chance a block and went down to 12. Calafell then added Kinsbaile Balloonist to his army, and Xu began the process of milling at the end of turn.

Stonybrook Schoolmaster, which came down for Xu next, would have completed his kill mechanic, had he been able to stabalize. But as things stood, he was fighting desperately for survival.

Kinsbaile Balloonist gave Winnower Patrol flying, and Xu went down to 6. Calafell continued to pile fatties to his side of the table with Cloudcrown Oak, and Xu continued the milling. However, Calafell responded by tapping his last land to get rid of the token generating Schoolmaster with Tarfire.

Facing lethal damage on the next turn, Xu played Aquitect's Will on Calafell's Mountain in a bid to find an answer. When he passed the turn without any plays, Calafell revealed Elvish Branchbender for Winnower Patrol to reach a gigantic 5/4. By this point, Xu needed all his resources just to survive the turn, and could not afford to tap a creature to mill.

Calafell pushed all his creatures into the red zone, and Winnower Patrol took flight. Xu got rid of the Balloonist with Coordinated Barrage, blocked Elvish Warrior with Drowner of Secrets, and used his Merfolk token to chump block Cloudcrown Oak. Sensing the win within his grasp, Calafell continued to pile onto the table with Ballyrush Banneret, but his decision to play Elvish Branchbender afterward cost him, as he was unable to pay for Xu's Broken Ambitions.

At 1 life and facing a horde of creatures across the table, Xu's face betrayed nothing as he calmly said, "done." Nonetheless, there was nothing he could do when Calafell sent all his creatures into the red zone.

Realising that the early game would be a lot more important in this matchup, Xu tried to bring his curve down by replacing Knowledge Exploitation with Merrow Witsniper. On the other side of the table, Calafell took out Runed Stalactite for Fertilid.

Calafell frowned at Xu's penchant for giving his deck a final cut when it was handed back to him post-shuffle (which is allowed). His displeasure deepened when he saw a one-land hand and had to mulligan.

Xu kicked off with Amoeboid Changeling on the second turn, which faced down Elvish Warrior.
Next turn, Calafell's Fertilid ran right into Sage's Dousing, netting Xu some early card advantage.

Drowner of Secrets for Xu provided a potential blocker for Elvish Warrior, but he decided not to chance his combo component, instead going down to 16. Calafell laid Vivid Grove, his first source of red mana, and Xu started the milling. The very next turn, Xu cemented his stranglehold on the game with Stonybrook Schoolmaster and a second Amoeboid Changeling. 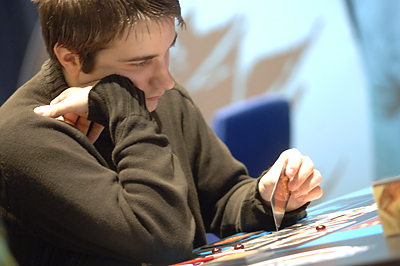 Calafell mulls it over.On his turn, Xu counted Calafell's deck (fourteen cards) and hand size, and passed the turn. Calafell tried to buy himself a few more turns by playing Kinsbaile Balloonist, enchanting Drowner of Secrets with Weight of Conscience, and tapping his two Kithkin to remove the Merfolk from the game. Xu responded by tapped all his creatures to mill Calafell for seven cards, then returned Drowner of Secrets to his hand with Disperse.

On his turn, Xu replayed Drowner of Secrets and milled the last cards from Calafell's library.

With the amount of creature removal he had seen, Xu boarded out Ego Erasure for Negate.

With both players keeping their opening hands, the first creatures in play were once again Elvish Warrior, then Amoeboid Changeling. A second Elvish Warrior was added to Calafell's board, while Xu had Drowner of Secrets.

Calafell then played Battlewand Oak without laying a land. Xu was similarly land tight, and passed the turn without any plays.

When Calafell next sent his creatures into the red zone, however, Xu had Drowner of Secrets block Elvish Warrior. The reason for his confidence was soon revealed to be Negate, which countered Calafell's Tarfire.

Xu continued to block the same way the next turn, and at 8 life, sought to slow Calafell down by Dispersing Battlewand Oak back to his hand. He proceeded to play Paperfin Rascal, which became a 3/3 when he won the clash. This effectively deterred the Elvish Warriors from continuing to attack indiscriminately. Having seen the Plains on top of Calafell's deck, Xu also tapped his changeling to mill the land away, leaving Calafell stuck on three lands.

With Xu chipping away at his deck, Calafell needed to quickly find a way to push the final points of damage through. Nonetheless his options limited, and he could only replay Battlewand Oak before passing the turn.

Finding a land, Xu first played Cloak and Dagger, then Amoeboid Changeling, to which he attached the equipment. Calafell found a land as well and had Kinsbaile Balloonist, which gave him a glimmer of hope. However, Xu had the perfect anwer in Ethereal Whiskergill.

Without a means of effectively attacking, Calafell could only continue to amass creatures for an ariel assault, bring Ballyrush Banneret and a second Kinsbaile Balloonist into play.

With Calafell at 8 cards in library and Xu at 8 life, both players could now smell the blood in the water. Xu thought long and hard before simply passing the turn.

In what would be the final attack of the game, Calafell laid a forest and played Cloudcrown Oak, before swinging with everything. He chose the 5/7 Battlewand Oak and an Elvish Warrior to be the creatures to gain flying. Ethereal Whiskergill blocked Battlewand Oak, Paperfin Rascal blocked the grounded Elvish Warrior, Drowner of Secrets blocked Ballyrush Banneret, and... Calafell scooped when he realized he would be unable to stop Xu from winning next turn.

As they shuffled up for the fourth game, Calafell asked Xu how many Drowner of Secrets he played. Xu just gave a non-committal smile.

The game started with Elvish Warrior coming down for Calafell, and Amoeboid Changeling coming down for Xu. Like a flashback to Game 1, Calafell proceeded to play Winnower Patrol, while Xu had Drowner of Secrets.

After looking at his top card with Winnower Patrol, Calafell asked Xu if he would like to mill it away. The break in routine suggested that the card wasn't one he wanted to draw. Xu declined, and the turn passed with Calafell not playing any spells.

When Xu similarly passed the turn after laying a land, it seemed to suggest he was holding countermagic. This impression was reinforced when he had Drowner of Secrets block Elvish Warrior. Yet Calafell's Plover Knights managed to join his Elves without event.

On his turn, Xu tapped his changeling to mill a card before removing it for Changeling Hero.

Calafell then revealed Elvish Branchbender for the Winnower, which was promptly milled by Drowner of Secrets. Calafell attacked with a lone flyer, bringing Xu down to 7, before adding Ballyrush Banneret and Elvish Warrior to his army.

Facing the formidable army gathering across the table, Xu coolly said "done." Calafell pondered for a long time before sending his lone flyer in. Xu was waiting for just that and the Plover Knights had their necks snapped. Calafell was however able to follow up with another flyer: Order of the Golden Cricket. 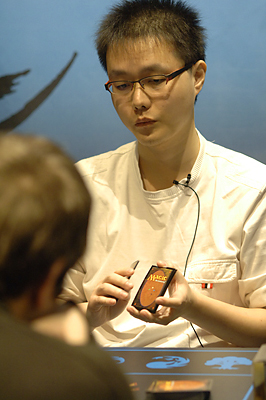 Xu is mainland China's first player in a PT Top 8.Paperfin Rascal came down for Xu and the clash revealed Drowner of Secrets for Xu, answering Calafell's question, and Battlewand Oak for Calafell. Xu milled the Battlewand Oak with Paperfin Rascal, but Calafell's next card was Lys Alayna Bowmaster, which was revealed to have Winnower Patrol reach 5/4.

When Calafell pushed all his creatures into the red zone, Xu counted Calafell's deck (sixteen cards), had Drowner of Secrets block the Banneret and Changeling Hero block an Elvish Warrior. He then played Disperse on Winnower Patrol. Xu took 4 damage, then regained the life with Changeling Hero's lifelink. Calafell could only replay Winnower Patrol and TarfireChangeling Hero.

Xu dropped Ajani Goldmane, and it suddenly seemed the tides had changed. Xu had his creatures get +1/+1, then swung with everything. Winnower Patrol traded with Paperfin Rascal.

Passed the turn, Calafell had Order of the Golden Cricket take flight and bring Ajani down to 1 loyalty counter. He then played Lys Alayna Bowmaster.

Xu continued to edge away, gaining 2 life via Ajani and playing Stonybrook Schoolmaster, which accelerated the milling process.

With eight cards in his deck, Calafell had but 1 turn to kill Xu, or get rid of the milling mechanism. Calafell swung with all his creatures, the Kithkin gaining flight and attacking Ajani, whilst his other two creatures attacked Xu. Xu tapped Stonybrook Schoolmaster to mill a card and create a token, which blocked the Huntmaster. Ajani went to the graveyard and Xu took 2. Calafell then played Rival's Duel, which was promptly Negated.

Milling Calafell down to four cards at the end of turn, Xu was able to win on his turn and move on to the Semifinals.

After the game, Calafell asked Xu why he didn't use Amoeboid Changeling to negate Winnower Patrol's trigger ability throughout the match. Xu said he preferred to mill away the good cards in Calafell's deck.