Dutchman Ruud Warmenhoven and Portugal's Tiago Chan are both long-time Pro Tour veterans (and Level 3 mages) that had never made a Top 8 prior to this weekend. Now, thanks to this pairing, one of them is guaranteed a spot in the Top 4 as well.

Ruud was unable to playtest much for this event because he's been backpacking around the world (he came here from Thailand), so he got a black-white aggressive deck from his countryman Wessel Oomens and played it more or less blind. The first five rounds of the tournament were his "practice rounds," wherein he went 2-3. A quick learner, Ruud then rattled off 10 wins in a row and was able to draw into the Top 8.

Tiago was also playing a deck he hadn't practiced-a very basic Owling Mine deck that Pierre Canali recommended to him. Tiago managed to navigate all 16 Swiss rounds without running into Boros or Gruul cards-exactly what he had hoped to do when he chose the deck.

Before the match, Ruud was curious as to what Tiago though about the matchup. 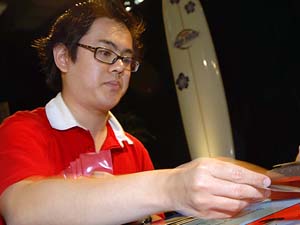 Chan's lack of testing didn't seem to bother him

"I didn't test that much [last night]," responded Tiago, "and although I don't know you very well, from what I do know about you, I don't think you tested that much either."

Ruud could only chuckle in agreement.

Ruud curved out to start Game 1 with Isamaru, Bob, and Hypnotic Specter, although the latter was met with Remand. Tiago was able to stop the beats with an Exhaustion and a Kami of the Crescent Moon, followed by another Remand on Ruud's attempted Jitte.

Meanwhile, Ruud's Dark Confidant was taking chunks out of his life total thanks to flips like Hand of Cruelty and the expensive Faith's Fetters. Tiago refused to block the Confidant, hoping that it would turn lethal as the game dragged on.

"In testing, my opponent would flip up three lands with Bob," laughed Tiago.

"In testing, my opponent would run the second Kami," replied Ruud, pointing at Tiago's legendary 1/3.

"I did that in a feature match in Round 3," admitted Tiago.

"Well, Day One is testing," shrugged Ruud. He then noted, "This game started well, but it hasn't progressed well."

The Dutchman couldn't squeeze much damage past the Kami, and an Exhaustion and a Sudden Impact combined to finish Ruud off in light of all the suffering the Confidant caused him.

After sideboarding, Ruud has access to four Castigates, which are his only way to prevent a Howling Mine from resolving on turn two. Tiago has three Pyroclasms to bring in, which border on unfair against Ruud's creature base.

Ruud mulliganed to five to start the second game-hardly an issue against the Owl deck-and again started with a Hound.

Tiago got out a Howling Mine before Ruud could draw a Castigate, and then peeled a Pyroclasm the turn after Ruud added Kami of Ancient Law to his side of the table.

"Why don't you have Gigadrowse?" asked Ruud of his opponent.

"I copied the list the morning before and it isn't that good," confessed Tiago. "I don't even have Twincast."

Tiago drew into a second Mine, then a Kami, and then an Owl, all the while keeping Ruud's Specter off the board with bounce. Ruud eventually got out a slew of creatures and attacked Tiago down to 2, but Tiago found a Pyroclasm in his next hand-filling draw step.

Ruud then forced a Ghost Council past a Remand and looked to be in great shape. But Tiago, riding the good fortune that has landed him here, bounced the Council, used Mikokoro to put Ruud in Owl range, and then Sudden Impacted for the win. Ruud did manage to play enough instants during his draw step to stay alive, but that left him unable to summon the Council again. Exhaustion made sure Ruud died from the Owl on his next turn. 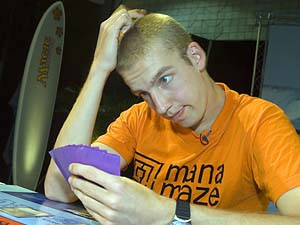 As the match was moved to the front table for the purpose of showing the players in action during the webcast, Ruud lamented the fact the Tiago was able to snatch Game 2 from him. Would his fortune turn on camera?

Ruud mulliganed again to start Game 3, but again had the turn-one hound. This time, though, he was able to steal Tiago's Pyroclasm with a Castigate, leaving him with just a Remand and a bunch of land.

Chan remanded a Savannah Lions just to cycle and found a Howling Mine to get the party started. Ruud upped the pressure with Shrieking Grotesque, but a fresh Pyroclasm cleaned up the mess. "Man. Man!" shouted an exasperated Ruud.

He rebuilt with another Hound and a Bob which raised some eyebrows (he was expected to side them out). Another Bob came down, but Tiago had an Evacuation to put all the little men back in Ruud's hand.

He followed that up with an Eye of Nowhere on a land which made sure his Owl triggered, then a Sudden Impact for 10. Tiago then flashed Ruud the second Impact to seal the match.

With no artifact destruction and only two creatures that survive Pyroclasm, Ruud's deck was no match for Tiago's. Tiago now advances to face Mark Herberholz in the semifinals.