Quarterfinals: Wurms Break out the Broom

two first-time Top 8ers, this would be a classic East meets West, aggro meets control matchup. Takuya Osawa's base Gruul deck squared off against Joe Crosby's base Azorius blue/black/white build with a spot in the semifinals on the line. 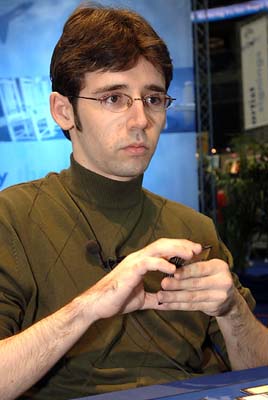 Crosby won the roll, and elected to play first. Neither player had a mulligan, and the first play of the game was a Utopia Sprawl on Osawa's Forest in order to produce black mana. Crosby had a Minister of Impediments for his turn three (having been on the play), and faced a four-drop from Osawa in the form of Cytoplast Root-Kin.

"That guy does it all," remarked a respectfully concerned Crosby.

He played a Blind Hunter to begin the damage race, and sat back on his Minister to stop the rare four-drop. Without attacks, Takuya simply built up his board, playing out an Aquastrand Spider in order to have two 3/3s in play and hold off the Hunter. From now on there was a very real threat that whatever creatures to come out of Osawa would be huge.

Crosby's next creature was an enchantment; a Halcyon Glaze to be precise, which was plenty large enough to swing and kill anything that blocked it. At the end of turn, Takuya shot the Minister of Impediments twice with Pyromatics (just to be safe from Carom), allowing for a big attack on his turn. The life totals stood at 18 to 16 in Takuya's favour.

Crosby put out a considerable threat in the form of Oathsworn Giant, who would make racing very tough for the aggressive deck of Osawa's. A Douse in Gloom in response killed Blind Hunter, who had to haunt one of his opponent's creatures (the Aquastrand Spider) as his own Glaze and Giant were still on the stack. The Glaze attacked to tie the life totals at 16, and Takaya was left to survey the board and work out what to do in the face of a Giant who could well be the beating of his deck.

Somewhere among the cards he drafted, there was both a Char, and a Living Inferno, that would be able to handily deal with the vigilant man, but it might be appropriate to just swarm out and attack around it. Cytoplast Root-Kin attacked, and was not blocked by Joseph, who was wary of the counter moving tricks the powerful four-drop could perform. Following combat, Osawa went with a Sporeback Troll, who took one of the Root-Kin counters, and looked good to hold off a ground offence from Crosby.

Joseph still had cards in hand though, and worked on getting even more with a Compulsive Research, while his opponent sat back with just a single card. He discarded a Glass Golem and a Train of Thought, and passed.

The Graft chain continues from Osawa with a Simic Initiate pre-combat, and a swing with everyone that suggested some Cytoplast Root-Kin token moving. The Sporeback Troll was blocked by Oathsworn Giant, and Osawa had a little think. His opponent was on 13, and he elected not to move any counters, simply to regenerate his troll. Joseph played a Withstand targeting himself, and dropped to 11.

A Pyromatics took down the Oathsworn Giant, and all of a sudden Crosby looked in very rough shape; without any 'real' creatures, and staring down quite the force. He played an Azorius Herald to win back some life, and swung for four in the air, following up with a Vedalken Entrancer. Osawa was in topdeck mode, and it would be interesting to see if he could build pressure to break through as Crosby's board got busier.

He attacked with everyone but his Simic Initiate, and moved a counter from his Spider back onto the Cytoplast Root-Kin after the spider was blocked in order to sneak through a further point of damage.

For the return swing Crosby had a Surveilling Sprite to activate his Glaze, then attacks from it and the Herald. The Simic Initiate got some help from his buddies, jumping to block the Glaze thanks to the spider, and regenerating thanks to the troll. 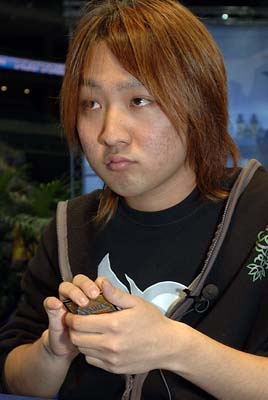 Osawa then rushed in dealing two between blocks from the Entrancer and Sprite.

As always, Joe had a creature to make his Glaze active, and this time it was an Agent of Masks. Osawa's Initiate could still hold it off, but nothing could stop the Herald, whose consistent two damage, and lifegain ability make him one of the most popular cards for Azorius around.

The life totals were 8-7 in Osawa's favour, and he tried to push his small edge by playing a Gruul Scrapper, who took a token from Cytoplast Root-Kin, and joined in a very large swing at Joseph.

Crosby blocked the Root-Kin and Troll, losing his Agent of Masks and dropping to 1 in the process. He needed something special, and ultimately didn't have it, contenting himself with a Vedalken Entrancer activation to see a little more of his opponent's deck before conceding Game 1.

Joseph complimented Takuya on his deck as he shuffled up. The Graft chain from Osawa's build certainly made life tricky for him in Game 1.

"Nobody says 'good luck' any more," opined Crosby shortly after wishing his opponent some for Game 2.

He might have been better off wishing himself some, as he had to mulligan his first seven on the play. Osawa, whose deck is very mana-consistent due to a general lack of gold cards, kept his start, and had a turn-one Simic Initiate, who beat in before Osawa played an Aquastrand Spider. Meanwhile, Joe was playing a mono-blue deck for the first three turns. A mono-blue deck with Halcyon Glaze.

Another couple of swings and a second Aquastrand Spider from Osawa seemed powerful against the relatively bare Crosby board, which got its first Plains on turn four, and a Master of Impediments to join it. The Glaze swung, and it was 16 apiece.

In what looked like it could be a short race, Takaya played a hasty Gruul Scrapper, and attacked Crosby to 8 before the Minister of Impediments could become active. Crosby dug for answers with a Compulsive Research, but it didn't look like a dig for victory while his opponent's board was so full. Crosby did have an Azorius First-Wing and a Halcyon Glaze swing to stay in it, but he definitely had to be concerned about the board as it stood.

All of Osawa's monsters attacked, and Crosby asked "Got the Char?", having seen it from Vedalken Entrancer in Game 1. Takuya flashed it, and Crosby scooped them up.

For the third game, Crosby again elected to play.

Each player kept, and again Takuya had the first play in the form of Simic Initiate, though this time it was quickly trumped by Azorius First-Wing from Crosby. Aquastrand Spider was again the play from Osawa, while Crosby had a swing in the air and Master of Impediments. Blue-white control these days gets to attack for two as much as anyone else, and Joseph seemed to be one of many rather enjoying the opportunity to do so, especially when it's in the air.

Osawa had no turn-three play beyond a Swamp, while Crosby just swung and passed also. When Takuya tried for an end-of-turn Scatter the Seeds, the Frazzle was there, and for the first game in the match, Crosby was ahead (and looked likely to stay ahead) on life. His Master of Impediments jumped all over a slow start from Takuya, while the First-Wing whittled down the Japanese player's life total in two-point chunks.

Joseph brought a Surveilling Sprite to join the fun, and after a little thought Osawa tapped out for a Streetbreaker Wurm, who resolved without issue. 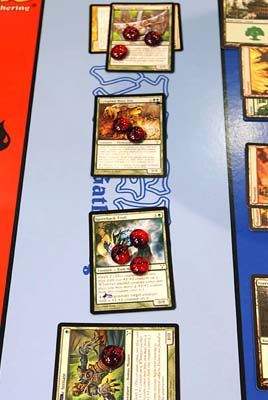 That's a lot of wurms turned straight in Crosby's direction.

A Compulsive Research discarding a Plains kept Crosby stocked up, and the air beats continued quite effectively, while Osawa's best attempts at attacking were hit with impediments.

Osawa's response to this was simply to make more threats. His threat of choice was Golgari Rotwurm, who took Simic Initiate's counter, and his place on the board, creating an army of wurms to bother Crosby. All that Joseph had in return was a Vedalken Entrancer.

With two big wurms out, one was always going to get to rush in, and it was the Streetbreaker that had the chance to try for some real damage on Crosby, who was leading 18 to 11. Surveilling Sprite jumped in the way, and then Osawa made a second Golgari Rotwurm with a counter from a Graft guy. The Japanese side of the board was getting rather scary.

On his next attack, Osawa got through with two Wurms, taking Crosby down to six, and a Sporeback Troll followed. Vedalken Entrancer got rid of a Douse in Gloom and a Seal of Doom, but ultimately it did not matter, as Crosby had no defence against a crush of wurms.