Visiting near-amateur Jisang Kang is thrilled to have made it this far. He picked up his random pair of PT points on his first trip to Japan for Worlds 1999, as part of the Korean National team. He came back for a Grand Prix, with limited success, but this time around he's proven his talent. His is playing Aluren, a deck virtually discarded since its splash at Pro Tour – Houston. 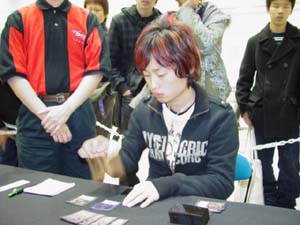 His opponent is Yoshitaka Nakano, also in the hunt for a title. Nakano is playing the increasingly inappropriately-named Suicide Black, last seen in the Top 4 of Grand Prix - Reims. Thus far he's avoided enough red matchups to make it to the Top 8, but three red decks inhabit the Top 8. His road could be a treacherous one.

Kang won the coin flip and led with Polluted Delta. He didn't sacrifice it right away, showing a shortness of land. Nakano had swamp and Carnophage. Kang drew forest off the top and played Birds of Paradise. Nakano shut him down with Smother.

But the top of Kang's deck was kind, and City of Brass was waiting for him. He searched out a swamp with his Delta, and played Raven Familiar. He took a Hickory Woodlot over Yavimaya Coast and Intuition. Nakano swung in and Kang chumped. Duress showed a hand of Vampiric Tutor, Cabal Therapy, Soul Warden, Raven Familiar and the Woodlot. Nakano got rid of his Tutor and added a Nantuko Shade.

Kang's second Familiar gave him Aluren, but Nakano had Cabal Therapy. He missed on his first try, but happily threw away Carnophage to get rid of the enchantment. Especially considering Kang had drawn Cavern Harpy to go with his Soul Warden, ready to gain an arbitrarily large amount of life. Dauthi Slayer showed up, and it looked like all hope was lost. Kang drew Vampiric Tutor and played it cool. Nakano had no more disruption, just Phyrexian Negator. Kang set himself up an Aluren and set his life total to one million, first checking for Snuff Out with Cabal Therapy. Nakano conceded rather than wait for Kang to find the combo pieces. 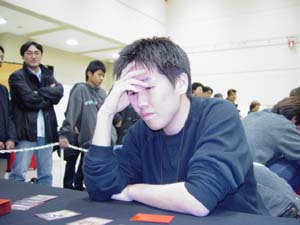 Nakano mulliganed for the second game, then started with Sarcomancy. Kang had City of Brass and Birds of Paradise. Duress showed two Living Wish, Cabal Therapy, Raven Familiar and swamps, and one of the Wishes went to the graveyard. Nakano increased his clock with Carnophage.

Kang used his other Wish to get Cavern Harpy and then ended his turn. Nakano bashed for four and added Dauthi Slayer. Kang showed more good fortune when he turned over the Vampiric Tutor he'd drawn. He put Aluren on top of his deck and then got to work. First Raven Familiar, then Cavern Harpy a couple times, and then Wirewood Savage. Nakano had no Snuff Out in hand, and conceded the match.