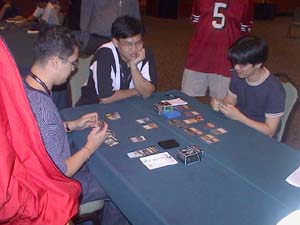 Edsel brought the beatdown when he cast Devoted Caretaker and Escape Artist. Zhou played Mystic Visionary on his turn. Alvarez experimented trading blows by attacking with Artist and not blocking the Visionary. After some complex mathematics (2&rt;1) he came to the conclusion that it was not going to favor him and he held the Artist back.

Yujian, not wanting the festivities to end played the mighty, mighty Frightcrawler to bring fear into the heart of Alvarez. The savage Frightcrawler caused so much alarm Alvarez had to cast Second Thoughts to be rid of the monstrous beast. Defiant, Zhou just showed the crowd just how good his deck was by casting the ultra mana efficient black Jackal Pup, Carrion Rats. What a beating.

Meanwhile, the crafty Edsel Alvarez played land turn after turn, biding his time for an opportune moment when he could cast game breaking spells like Mystic Penitent (which actually managed a good trade w/ Zhou's Visionary) and Rites of Refusal (discarding Shelter) to counter Yujian's Zombie Assassin. Aha! But that was indeed part of Yujian's Cunning Plan as Alvarez did not have a counterspell for Zhou's subsequent Repentant Vampire! "Repent the end is near!" said the Vampire as the flying black creature would eventually finish Edsel and take its master to the semifinals. What the Vampire didn't count on was the Desire Kirtar had for it. Mesmerised by the ugly white flying creature 'removal' card the Vampire was left at home.

The obsession the Vampire had with Kirtar (or is it the other way around?) did not prevent Edsel from running his Aven Smokeweaver straight into it. The birdman got eaten and the Vampire gained some weight. Scrubby you say? Of course not! This is a GP quarterfinals for crying out loud! The dead Smokeweaver provided a seventh card to get Edsel to threshold, so when he played ANGEL OF RETRIBUTION he was out for some serious avenging! Now, the Vampire could not block and life started to suck for Zhou Yujian. 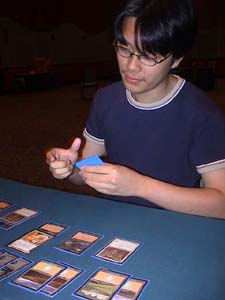 Looking for an answer, he wasted no time in Deeply Analysing the contents of his library. He gathered enough resources to bring Aven Fisher to distract the Angel of Retribution from completing its quest of justice for its fallen comrades. Getting more and more desperate, Yujian had to cast Churning Eddy on his own Vampire to get it to throw itself in front of the Angel. Or would it? The Angel's attacks had taken fifteen life points from Yujian's life total. The Devotion of the Caretaker Alvarez possessed kept Yujian from effectively dealing with any of Ed's creatures. When Yujian drew his second Morbid Hunger, he checked the life totals. Edsel stood at 10, having been beaten about by various dorks throughout the game.

It was tragic. Yujian played Morbid Hunger four times targeting Alvarez and the Angel did not get to finish the job of taking out Zhou. It would have to wait for the next game to see some action. 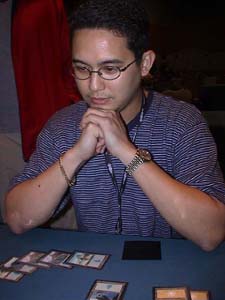 Again Alvarez had plays for the first two turns, making Mystic Penitent and the Artist that is good at Escaping. A sense of deja vu was brought about when Yujian made Mytic Visionary. This writer sincerely did hope it would not end in Morbid Hungers. Actually I just hoped the darn thing ended quickly. Slow U/W decks! The next eight turns saw the Escape Artist making rude drawings on Yujian's person. Who needs Lava Axe when you can do eight damage with a 1/1. The Escape Artist's career was accompanied by a flurry of spells - An Alvarez Cloudchaser got Crippling Fatigued, and a Zhou Aven Fisher was countered by Circular Logic. Somewhere along the line Devoted Caretaker was cast but it immediately Wasted Away. A Zhou Patrol Hound managed to enter play unmolested and started making inroads into Ed's life total.

What was unfortunate though is that Ed walked his Angel of Retribution right into Syncopate. A Deep Analysis later, Yujian found his Repentant Vampire and the life race was swung in his favour. The card advantage was game winning. Nah, Alvarez was mana flooded. Zhou made Zombie Assassin. Alvarez tried to delay the inevitable with Churning Eddy on the Vampire but Yujian replayed it with Pilgrim of Justice. Ed could not find a proper answer.